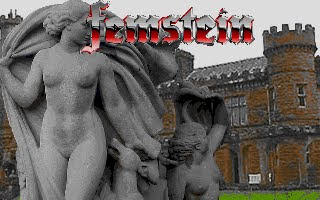 Initial impressions: A lot of work has gone into graphics and Doomjedi's artist skills easily show how talented he is as this is a very beautiful mod to look at. The fact there there is some animated nudity may put some people off, with younger gamers cautioned about some of the artwork, but i imagine that most people won't have a problem with it.

Gameplay: The gameplay is fairly challenging as there are many guards placed throughout each level. There are 5 bosses within the 16 levels plus some mini bosses including one in a helicopter spread liberally throughout. The guards are well placed and there are plenty of surprises, plenty of secret areas and a good mix of inside and outside areas.

Mapping: The mapping (By WLHack) is quite decent as all maps are challenging. The mod takes place in different scenarios so you aren't just looking at the same thing all the time although some of the levels contain consistencies so that some areas of some levels can start to look similar. There are some mapping errors in some levels though in relation to the 3rd plane.

Likes: The real feature is the incredible nearly all new, rich beautiful artwork by DoomJedi. The mapping is well done and the makes the player think a fair bit about how they navigate the levels with plenty of challenges in store. The music and sounds are also done quite well.

Dislikes: I suspect most people are expecting me to say the nudity but to be honest with you it didn't offend me at all. While playing I just saw the semi-naked enemies as comical characters in a game, and not as anything offensive in any way, and to be honest I'd be shocked to read if anyone did while playing.

Some sprites I felt where a little unnecessary, like that disembodied naked women sprites and especially the starting weapon, which is the one thing that lowers the game toward ludeness.

The 3rd plane mapping has been done quite poorly at times where it's possible to see the sky through gaps between wall and roof and grass between walls and floor - This is an easy thing to fix in most editors. There are also a few places where there are misplaced ceiling and floor tiles that don't match the others around them. 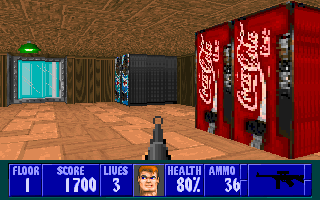 Wrap-up: This is an interesting first mod from DoomJedi as there have been questions raised about the subject matter but ultimately what it is is an amazing showcase of just how talented his graphical work is. The mod looks a little unfinished (or not properly tested) in spots which takes a bit away from the mod and makes it look a little unprofessional in places. This is still a fun mod to play and shouldn't really offend anyone, despite there being some animated nudity.

Where Can I get it?: You can download the mod by clicking HERE or by clicking on the screenshot at the top of this post. The makers of the mod have self-rated this higher than the standard PG-13 rating for most Wolfenstein mods.

Disclaimer: All reviews are only my opinion when playing the mod and are not intended to discredit anyone or the hard work they have put into creating their mod.
Posted by Dean at 10:46 am