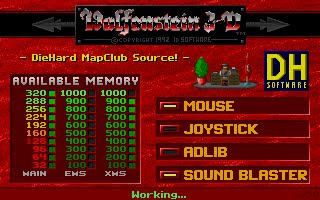 Initial impressions: The additional features have been well chosen and enhance the levels without detracting from them Original walls have been used and this is actually a better look base set than the original game, in my opinion.
The timers are a great idea and I just love the bouncing keys, as I do the in-game messages.
The use of walls nd sprites has been done in a very appealing way by most mappres and no one has really fallen in some of the Community dislikes such as multiple Bosses and massive mazes. 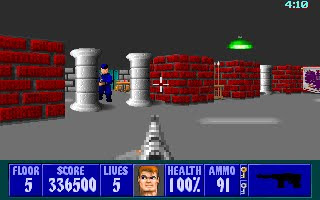 Gameplay: The gameplay is fast and there are a few more Bosses scattered throughout the levels. The individual thing about this Community set is that the player starts anew with each new level, meaning nothing you collect carries forth to the next level, so you might as well use everything up! This, of course, is rather an unnatural way of playing for most experienced Wolfers who have always played a lot more conservatively but this gives you a great chance to blast away a bit more recklessly!

Mapping: The Mapping is of a mixed level, as you would expect in a Community mapset. Seeing this was the first of these in the series and the first Community mapset in quite a while, this is a really great result. There are fantastic levels by AReyeP, Ack, RonWolf, BrotherTank and Thomas (the more experienced mappers) but some other surprisingly good levels by others as well (Serpens especially).
There are plenty of secret areas, lots of health and ammo and a good level of treasure used also. Most of the maps are larger and more difficult than the original set but most are very well done and easily replayable. 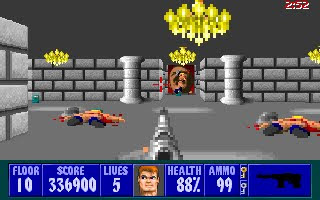 Likes: The aditional features are fantastic (except for a couple of minor side effects mentioned below) but really add something to the mod with out taking it too far away from it's original self. One really great thing that was added (for the mappers) was the ability to colour code your ingame messages, crosshair and timers. This was done by placing a certain wall number on a predetermined spot on the mapping grid and the corresponding coloured item would appear in game. Ostensibly, this game each mapper some additional control over other elements of their level.
The shadeing, where used, looks great, The "bouncing" keys looked amazing and I always love in game messages, especially those hidden ones! The heat beat sound was good but I thought at 65% it was a little high to start having it come on and it became a little annoying after a while.

Dislikes: There's a couple of glitches in the coding. While I love the addition of the bleeding guards feature, what happened to me in the screenshot below is a rather unfortunate side effect. If the enemy squirts out some blood in the doorway then once the door closes, you can't reopen it, meaning you are stuck from going through that door, hence generally making it impossuble for you to proceed any further in the level.
I also had some sound and graphic glitches. Generally the sounds wouldn't play through the menu and I lost them a couple of times in game, plus the heartbeat sound never quite sounded right to me either. I also got a graphic glitch where a vertical line appeared and stayed there for a few levels distorting things a bit. 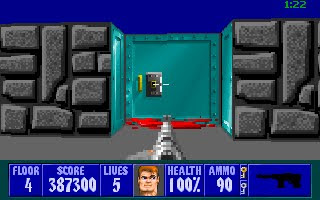 Graphic Awards were given out to the winners!
Wrap-up: A really great Community set that is fun to play. I like that the warp feature is left in so that the player can jump to any level at any time and have a look at their favourite mappers levels, or as I once did, played the levels in the order of popularity from the votes that were cast. the mappers invovled have all put in big efforts to produce quality maps and although there was fame and glory with the votes, I don't think anyone was disappointed with their level and just happy to have contributed.

Lookout for reviews of the other months of the DHW MMC coming soon!

Disclaimer: All reviews are only my opinion when playing the mod and are not intended to discredit anyone or the hard work they have put into creating their mod.
Posted by Dean at 12:51 pm