Review: The Grail of Eternal Life 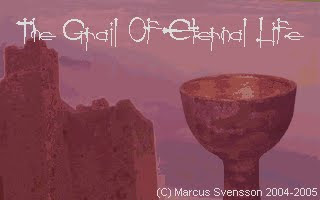 Initial impressions: Coming in, this is a mod that I'd been looking forward to playing and has quite a good name about it.
The first level opens in a nicely decorated forest. The sprites, sky and falling snow have been done very well and this shows great promise for the mod. The guards have been taken from Operation: Letztershutz and other mods but they fit well with the mod, especially the outside snow theme. The sounds and music seem to fit well as do the sprites and other elements used in this level.
The first map is a very big maze that can be a little annoying to get through but has a fairly straight forward path to follow.

Gameplay: The gameplay is quite easy, especially after the first few maps, when the mapping becomes so poor and predictable that there is very little challenge completing any part of the mod. The first level is the hardest as the trees, snow and tight path can make visibility quite difficult at times.
There are no real traps within any of the levels and those that have been attempted are so poorly executed that any player can see what is going on and avoid any type of unexpected attack.
The game play is made very simple by the ample and extremely random placing of ammo and health, which seems to be placed pretty much anywhere the creator felt like it, same with a lot of the treasure items, with no reality in mind.

Mapping: This, in my opinion, after level 2, is one of the worst mapped mods that I've ever played. Well actually I've seen worse, but for a mod that has had some serious work done on it by it's creator and coder to try to make a good mod, this is more the most disappointing effort at mapping I've ever played. Looking at the credits list it shows that levels 1 & 2 were done by other maps than the mods creator, so they aren't to blame as the first 2 maps are tolerable.
The rest of the mapping consists of small, highly predictable maps that are generally a nonsensical connection of rooms, very long tunnels and passageways that go nowhere, which the player has to back track along once reaching the end, and maps recycled from other mods, especially from the original Wolfenstein 3d, even though this is a Spear of Destiny mod!
Some of the lesser highlights of the maps include;
- Level 13: One single tunnel that does a U turn with 1 square rooms off it containing guards.
- Level 15: Where the entire map is just one big spiral
- Level 16: That is so small it barely contains 100 objects including guards and all sprites!
The mapping is so poor that the creator just completely got lazy and didn't even bother to map the second secret level (Level 20), instead spending his time making this in the map editor;

And explains his actions as thus "What? I was bored and had to put in some kind of place-holder."

Likes: The wall textures are the best part of the mod, they actually set a half decent feel and look to the mod. There are some random ones that don't look to fit in that well, including one that looks like it has had coloured paint splashed over it, but the doors are nice and fit in well with the walls.
The textured floors and ceilings are well done also and generally fit quite well with the walls.
Most of the sprites that have been used fit fairly well, although the treasure items seem to look out of place a bit.

Dislikes: Everything not listed in the 'Likes' section above!
The one thing I haven't talked about was the music. The tunes are all taken from Castlevania and other games but none seem to actually fit very well. Maybe my contempt for the levels as I was playing them made the music stand out as more irritating than most tunes, but I didn't find that these were very suitable, mood enhancing or contributed to improving any of the poor aspects of the mod. I suspect they actually weren't that bad but more lumped in a bad situation.
The use of a sword as the hand combat weapon just makes no sense either and is severely out of place.

Ratings
Dean's Score: 2.5/10
Difficulty: Not as difficult as the original Spear of Destiny.
Best Level: None
Worst Level: All

Wrap-up: This was an incredibly disappointing mod for me. I was VERY surprised to have read how highly revered this mod has been and wondered if I was actually playing the same mod others had talked so highly about! In fact, this was a real struggle to actually complete playing through by the end.
This had some good work done on walls but the lack of care and respect for the levels seemed to pretty much get thrown out of the window. I can't really recommend this to anyway to play, except to see how to completely ruin a mod with potential.
The creator announced that he was developing a new version of TGOEL, a V1.5, with new maps. The development website for, which promises all types of enhancements and new features, including new screenshots, hasn't been updated in several years though.

Disclaimer: All reviews are only my opinion when playing the mod and are not intended to discredit anyone or the hard work they have put into creating their mod.
Posted by Dean at 2:06 pm