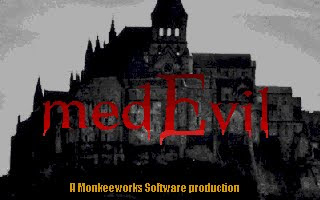 Initial impressions: This is a very well presented and professional looking mod. The title screen, menu and menu music is extremely well done and sets a tone ealy for the mod. I'm not a huge fan of melee weapons like the sword used in this, but I managed to get a handle on it quite quickly and it only stays as the main weapon for a map or so until you build enough ammo and find other weapons.
The walls and sprites are done extremely well and fit the mod perfectly, as do the guards and music. The most annoying part is the damaging sprites as these can kill you from quite a distance away.

Gameplay: The gameplay is quite fast paced with most guards being fast moving and plentiful. The maps are nicely decorated and have used the guard types well to enhance them.
There are constant mini bosses to battle through theout the mod which really challenges the player a bit more then just tearing through 10 standard levels and helps break up any predictability. The mod has been designed to really tell a story across the 10 levels and builds really well towards the level 10 finale, this is further enhanced by the intermissions screens and gradual introduction of different enemy types and Bosses.

Mapping: The mapping is extremely well done and helps bring the whole theme and feel of the mod to life very well. The maps have a whole grungy, dirty look and a feel to them which compliments the walls and graphics used perfectly. There are a lot of tight passageways to follow and the guards and other enemies are used in good quantities.
There are a mixture of outside and inside levels but all progress in a fashion that leads the player forwards. There are a few mazes within the levels but nothing too ridiculously large. There are ample secret areas hidden throughout the maps, all of which strongly assist the player on their quest. The secrets are usually cleverly placed with many often in or near rooms containing large battles or Bosses and are well worth searching for.

Likes: Everything in the mod has been specifically chosen or designed to work with each other and the theme of the mod. You can tell that this isn't just a collection of things that someone has liked and all placed in a mod together hoping they'll work. There has been a definite plan and idea in place through the whole creation of the mod.
The storyline is well written and develops nicely as you move through the levels.
The balance of difficulty in the mod is as well developed as I've played for a while, where there are harder challenges than original Wolf 3d, with nothing too impossible, if the player is careful and thinks about the best way to combat each scenario they should be able to move along nicely. All the little touches included, like the ghosts, may not all be noticed by every player but they definitely help make for a fuller, richer playing experience.

Dislikes: The damaging sprites are the main annoyance for me in this. It's good to have additional, creative things like this but unfortunately the radius in which the items can inflict damage is just too large. The problem comes that most of these items have been placed in tight passageways and areas where the player is forcd to go quite close to them. This is understandable in a mapping sense but there are a couple of occassions where I was forced to brush against a wall and was killed by a damaging sprite placed on the other side of the wall. It's pretty crappy when you are killed by something you can't even see!

Wrap-up: A very good mod with a different theme to the traditional Wolf mod. This is challenging but very entertaining and well worth playing. The only recommendation I can give is to be VERY careful of the damaging sprites and save often. A mod every Wolf fan should try at some time or another.

Disclaimer: All reviews are only my opinion when playing the mod and are not intended to discredit anyone or the hard work they have put into creating their mod.
Posted by Dean at 10:09 am