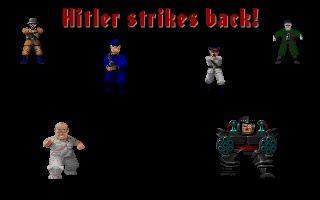 Initial impressions: A nice looking recreation of the original set that has been well decorated with a moderate level of challenge. The opening level is very small and contains a fairly easy to find secret elevator but it is nicely decorated although Guard usage seems a bit light on which reduces the challenge of the gameplay a fair bit.

Gameplay: The gameplay is fairly standard and not overly challenging but has been done to an adequate level. There's nothing glaringly wrong with the mod it's just not as challenging as it could have been made and is a fair bit lighter on in challenge than the original. I would have liked to have seen the mod build to be more challenging through guard frequency and harder scenarios rather than just a use of different types of guards.

Mapping: The maps are a little small and quite simple by design, I was able to complete most maps to 100% in only a few minutes each.
Treasure has been used too willingly and it's very simple to find enough to keep your extra man count at maximum.
Health has been used a bit lightly, especially the 25 health item and 1 up, with most levels not containing a 25 health item at all and only a few levels possessing the 1up always hidden in secret areas.

Likes: The Boss sprites in the SDL version have been greatly improved and look fantastic.
The maps are nicely decorated and are visually appealing with all looking similar to the originals, only much smaller in size and complexity.

Dislikes: You are unable to access the 2nd Secret level as the elevator only moves back 2 spaces instead of the required 3 to open the gap to allow the player to get to the secret elevator. This is a simple coding fix and something that needs to be updated . Just to be sure, I checked the map, there's no enemies or anything blocking the elevator either. (EDIT: Havoc has now released an update with this fixed).
The maps are a little small and the guard usage is quite light. The guard placement becomes very predictable with a lot of small roms which usually always contain only a single guard standing front and centre waiting for you nearly every time. Wrap-up: The mod is nicely done but isn't much of a challenge for an experienced Wolf player. The levels are nicely laid out, although most are very straight forward and a little on the small size. I emailed Havoc to advise of the problems with the pushwalls and he issued a new version within days explaining that he hadn't realised that this had occured. This set, although it looks great and is nicely done, would really more suit an introductory level player.

Disclaimer: All reviews are only my opinion when playing the mod and are not intended to discredit anyone or the hard work they have put into creating their mod.
Posted by Dean at 11:34 am