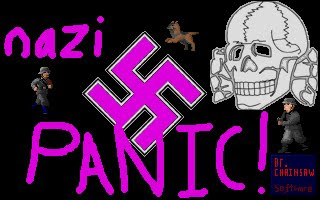 Initial impressions: Creatively made and bordering on a bit wacky, this was an entrant in a competition at the DieHard Wolfers forum where modders where to make, and release, a mod in 1 week. This was the winning entrant and has plenty of Dr. Chainsaw's colourful and individual flair about it.
The mapping is well done, the status bar and a lot of the non-original walls and sprites have been taken from elsewhere, but there are also plenty of new of both created especially for this release.
Using plenty of colour and with his tongue planted firmly in his cheek, Dr. Chainsaw has turned this into a fun set thats enjoyable to play through.

Gameplay: The gameply is relatively fast paced with plenty of guards, well placed, to keep you on your toes. The levels are are of decent size with plenty of treasure, ammo and health and secrets throughout.
Visually the game is very dynamic with bright colours, wall signs to read and creatively recoloured versions of a lot of the original games walls.

Mapping: The mapping is well done but unfortunately Michael goes with the similar story of making the player back track through large amounts of the level after finding keys, like he did in his other release 'Hitler's Ark' (Review).
The 3 levels have been well mapped with ample health and ammo so the player should never run out, and plenty of (small) secret areas full of treasure and other items.

Likes: The artwork is well done and adds a visual style of it's own here. This is a fun set and at 3 levels doesn't get tiresome or boring.
The mapping, other than what's outlined in the 'Dislikes' section, is well done and maps are challenging and nicely laid out.

Dislikes: Michaels' usual mapping style of making the player run back across the near entire level to get to either the next locked door or the exit has been used again here and can be quite frustrating and time consuming.

Ratings
Dean's Score: 6.5/10
Difficulty: About the same as the original game
Best Level: 1
Worst Level: None

Wrap-up: A fun, but short, set that will entertain you and fill in half an hour of your day. Brightly coloured and with entertaining elements to look at, this is nice effort and worthy of the cometition win it achieved.

Disclaimer: All reviews are only my opinion when playing the mod and are not intended to discredit anyone or the hard work they have put into creating their mod.
Posted by Dean at 11:27 am