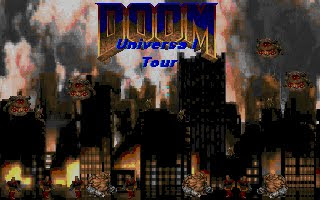 Initial impressions: The first level is quite good, nicely laid out, and the DOOM graphics have been incorporated well into the Wolf 3d environment.
The status bar looks fantastic, and the menu and border colour scheme has been chosen well, as has the title screen. The enemies fire differently to what they do in DOOM, with the Wolf 3d dog being replaced by the Imp (unfortunately it still has the dog bark though) and you are unable to pick up the chaingun from the DOOM II heavey weapon dude when you kill him, these guys seem to do a LOT of damage at close range.
The DOOM armour has cleverly been reused as treasure items in this and a large number of DOOM & DOOM II walls and sprites have been utilised. Like in some of Ian's other mods, it would also have been nice to of had some music from the source of the project rather than having the Wolf 3d music left in. DOOM music would have taken this to another level in my opinion. 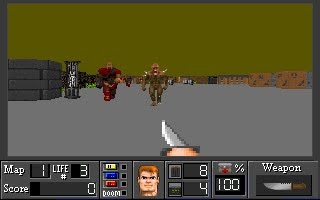 Gameplay: The gameplay is nicely paced with enemies constantly coming at you, although you do get chances to catch your breath. The pathways the player to follow are fairly linear within the game but there are also some nice layouts and challenges that lead to some good battles. There's more here within the mod than initial looks there is as there is some nicely done mapping and a nice array of weapons and enemies to keep things interesting.
The enemies firepower seems to be a increased from their Wolf counterparts and can be quite damaging at close range.

Mapping: The mapping is quite well done and suits the theme nicely with a good mixture of open areas, structures and passages. A lot of the Doom textures and sprites have been utilised very nicely and nothing really looks out of place.
The enemies behave differently than in DOOM, but once you stop expecting them to behave in their traditional ways, then things work quite well.
There are plenty of secrets and ample health and ammo throughout to keep the player going and luckily there is enough challenge so that the player has to be careful to some degree rather than just charging in to each new area. There is ample use of sprites and the layouts look colourful and decorative. 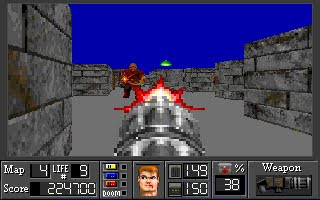 Likes: The mapping is quite decent and the DOOM environment has been done quite well in this, in fact a lot better than I've seen and played in a lot of other 'DOOM' Wolf 3d mods. It's nice to see mods that aren't just the straight forward Nazi theme and this honours DOOM quite well but also allows the creator to include some individuality to the theme and it's crossover with Wolf.

Dislikes: The sound effects of the Wolf 3d dog have ben left in as the battle cry for the Imp and just sounds out of place. Likewise, actual DOOM or DOOM II music would have made the environmental playing of this much better than leaving the original Wolf 3d music in with DOOM sprites and walls.
The mod can be a little mazey at times, especially level 2, but thankfully it doesn't get to a really annoying level. 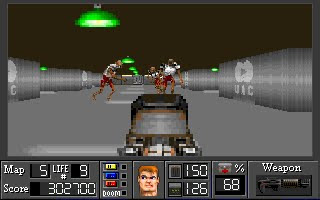 Wrap-up: This works well as it's own thing rather than trying too hard to simple replicate all DOOM elements which very few mods have been able to do accurately. It's own look and style, and the flair of the creator to make it hsi own take and style of the DOOM theme, makes this fun and quite enjoyable to play.
This was quite enjoyable to play but it's a little disappointing for me that it never ended up being longer than 5 levels. There is some very well done stuff here and the mod is nicely challenging.

Disclaimer: All reviews are only my opinion when playing the mod and are not intended to discredit anyone or the hard work they have put into creating their mod.
Posted by Dean at 10:53 am