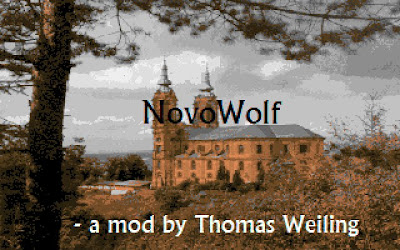 Initial impressions: I'm not sure if the creator had Thomas' permission to use his mod as a base, and I guess it doesn't really matter, but for me there's the whole ethical aspect of how much credit can I claim for this mod and is this meant to be a tribute set or have a just stolen someone else's mod, used it as base and taking credit for someone else's hard work?
As I attempt to review this, a lot of the positives aren't due to the maker of THIS mod, but more to the maker of the mod that this used as a base, this makes reviewing something like this difficult, especially as then basically turns into just a map pack.
My initial impressions is that this looks a lot like NovoWolf, only not as well mapped. 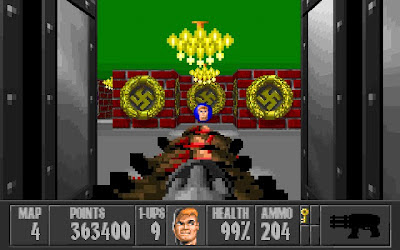 Gameplay: The gameplay is fairly well done, although a lot of this plays part to the number of different enemy types installed in the original version, but the mapper does use them well. It's quite often easy to pick when a large battle is about to happen though as you will come to a room/s literally full or ammo and health boxes. Plenty of guards have been used throughout and sometimes firing your weapon in large open spacs can send guards running from multiple rooms and other places, which I believe is intentional and makes the player have to play somewhat carefully.
The usage of bosses is a little weird but this is because the mapper has tried to squeeze all the bosses used in 3x as many levels from NovoWolf into a 10 level set, meaning you can come across bosses quite frequently as you work through the levels.

Mapping: The mapping isn't too bad. The maps are mostly small and well decorated and generally serve a purpose for being there. The environments have been nicely done with a good use of wall art and sprites, although sometimes a little too much; 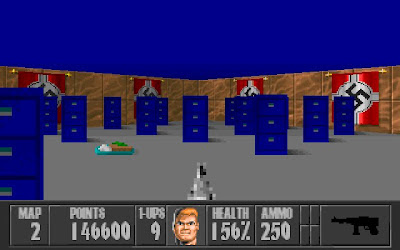 The levels contain ample treasure, although most of the time it's only the crown replacement used, even out in the open, like, everywhere... I 'm not used to so easily finding the highest level treasure item so consistently throughout a mod so this is certainly an interesting decision by the mapper. Usually the crown (or it's graphical replacement) is kept to hidden areas and/or hard to access areas, like Boss treasure rooms etc. There is substantial health and ammo in nearly every room making it extremely easy to stay as full health and near full ammo limits. The predetermined ammo level (250) set by Thomas, that the mapper has to work with here, means that the player can basically run around using the Chaingun at all times with very little worry of running out of ammo.
There are very few secret rooms, and most just contain the same items that are laying around everywhere else anyway. Unfortunately not everthing has been tested properly though, with some minor floor code errors and at least 1 secret area that goes nowhere;

After Level 5 is where things take a down note though. Level 6 is pretty much exactly the same as Level 6 from NovoWolf, as is Level 7, except for the removal of one room and the addition of another Boss. Levels 8, 9 and 10 do seem to be original levels though.
It's one thing, in my opinion, to do a tribute set (of sorts) to a mod but to use it's levels as well, for me, that's pretty much passing off someone else's work as you own, and when you are 'honouring' someone else's work, the last thing you want to do it look like you are taking credit for their work!

Likes: The mod looks great, it's nicely decorated, sometimes challenging and there's plenty of nice enough mapping to mix things up. NovoWolf is a good mod to have chosen to use as a base as it offers so much, a great variety of enemies and bosses and is a very beautiful mod to look at.

Dislikes: Using someone else's mod as a base. I know it's been done before by other mappers but this is often met with consternation and none of these types of mods are ever as good in quality to the original. I've had it done without permission for a mod I made, and I've often heard Thomas talk down others that have done it also. I'm not sure if Thomas knew the maker was using this as a base, and if he did, what he thinks of this, but for me I feel that at least some extra effort should have been added to make it very clear that this was only a mapset of someone else's mod. I think using levels from someone else's set is poor form, I know I wouldn't be too happy if someone had done it to one of my mods.
Changing the title screen or the 'Read This' or something to at least acknowledge the original creators work, and to personalise it a little to your own work, while also saying that this isn't the original mod, within the game, I felt is a measure of respect that should of been followed here. 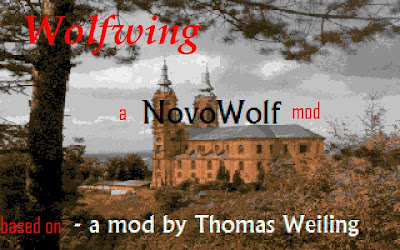 Took me 4 minutes in paint!
Ratings
Dean's Score: 4.0/10 (Based on Mapping only)
Difficulty: Harder than original Wolf, not as hard as NovoWolf.
Best Level: 4
Worst Level: 6 & 7 - Because you stole them!

Wrap-up: NovoWolf is a very good mod and I can see why the maker chose to use it as a base, but for me there a few inexcusable things here that I feel the the maker should have done;

1. Don't use other peoples levels.2. Make the mod distinguishable from the original.3. I personally would run the idea of doing the set by the original mod maker, especially when they are still in the community and easily contactable.

There's not all bad here, and I know I rant a little bit, especially when the community is making mods for free, that aren't protected, meaning we can't stop someone else using our work and passing it off as their own, heck I've even had some jerk from Russia did it with one of my mods (at least change the email address genius so I don't get people emailing me asking how to complete one of your levels!), I just feel there needs to be an (almost) unspoken level of respect towards other peoples work. Yes, I freely admit that this probably has contributed to the score I gave this set.
If you love Thomas' mod, or have played and enjoyed (this set) makers levels elsewhere and want to play more of them then this is worth playing, outside of that i'd recommend playing the original NovoWolf rather than it's fairly average tribute set.

You can download NovoWolf, the mod this is based on HERE. You can also read the review I did on NovoWolf, from March 2011 HERE.

Disclaimer: All reviews are only my opinion when playing the mod and are not intended to discredit anyone or the hard work they have put into creating their mod.
Posted by Dean at 1:17 pm