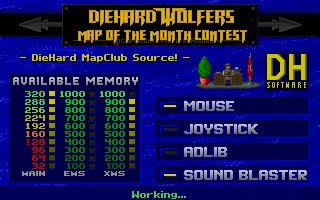 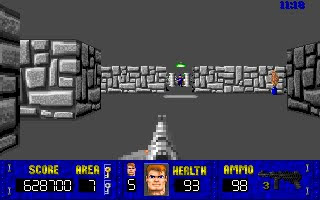 Initial impressions: The new doors look great and really fit in well with the original wall set as does the shading. The changed Menus look great and this not only makes itself to be different from the original but a further advancement down the MMC chain of mods.
Again like in the June 2007 set, the levels have been randomly placed. This doesn't seem to make much difference to the enjoyment of the set as a mod as each level starts a new and the player isn't looking at the mod as a continual entity but more a sum of it's parts.
One thing I really like are the 'hidden' ingame messages when you do particular things like when try to a find a secret wall you sometimes get a message that states "If you could push it then what?", clever stuff and a nice little hidden bonus.

Gameplay: The gameplay is again fast moving with a lot of thought going into guard placement and challenging scenarios. The inclusion of a Boss in most levels changed things a little as you start to expect one with each new level. Most of the levels were quite large, many with unnecessary rooms but the use of health ammo, treasures and secrets are plentiful to keep the playing going. The fact that most levels had a good amount of competition meant that the player isn't just running around with 100 health and ammo all the time. You can usually judge the amount placed in a level by how much you leave behind and still finish th level on full.

Mapping: The mapping in this set is again quite good but with more mappers there is a greater variance in desgins and styles. One if the most common factors that mappers have used here is to use a Boss in their level. There are some real stand out levels here for me, AReyeP's level is again of outstanding quality, as was Arielus', but the level that I really enjoyed (perhaps becuse it was so different from the rest) was RonWolf's 'Dogs' level. This level made you think and act a whole different way that the others and really like mappers that can make the player have to do that. Again credit to Ack and also Serpens who continued to this these as a great showcase of His mapping ability, something he continued to do in other Community sets made over the years. 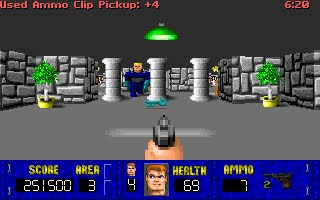 My level (Level 9 - Gatekeeper) was made on the last day of submission and was one I was very happy with. It was clearly the smallest map of the set but that wads done intentionally as I wanted to try to make a tight packed, clever little challenge without over loading the map with huge guard numbers and many additional rooms just to fill the map. Just don't ask me why I included a hidden room with 8 Gold keys in it, as I sure don't have an answer today for it! After replaying the level for the first time in 4 years today, I'm still really proud of this level!

Likes: Again, there seems to have been a lot of thought put into most elements of the levels. It's clear to see that the concept had caught on with even more mappers submitting maps for this month.
Seeing the development of mappers is something I'm really enjoying watching as I play through these sets again. RonWolf and Serpens have especially really shown to me that I didn't credit their mapping as early as i should. It's also great to see others in the community that arent really known for their mapping, like Adam Biser, BrotherTank and CodeTech have ago at making maps also, showing they can have a lot more skills than just their coding or artwork skills.
The Exe that BrotherTank created for this is excellent, with lots of little changes that enhance the mapping work of the people involved, in fact, I'm really quite surprised that these haven't been used as the base for other mods! I especially like the 'Tab-T' option which lets the player turn the wall sounds off while searching for secrets. Some of the little things like the mapping controls that allows each mapper to make the floors, ceilings, timers and onscreen messages appear in the colour of choosing plus, my favourite, the hidden messages that appear within the game when you do something. Messages such as;
- Wall Pushing: "Push, push, push why so pushy!?"
- Pushing a statue: "Sorry, it's not your size!"
- Pushing other items: "If you could push it, then what?!"
Dislikes: All the bosses became a little repetitive (especially seeing most, including me, used the same one - Hans). Some of the levels were a litle too big, unnecessarily, there's often some merit in making levels smaller and still achieving the desired result. Plus Level 10 I thought was just ridiculous with 3 Bosses and 2 Hitler Ghosts with very little ammo supplied.
The heartbeat sound, although fixed from it's distorted nature form June 2007's edition, seems to start even earlier now (somewhere in the 70%'s). I'm aware I've ben hit but this I found to be distractive, especially when in a Boss battle with other guards around and you are trying to hear and find out out where everyone is. I can simply look at either BJ's face or my health % to know whether I need to retreat for health or not, besides, when fighting a Boss, I'm expecting to get hit and lose health to some degree and I don't really need this incessant beating in my head at the same time.
The weapon change speed seems to have been slowed down, this caused me more damge at times having to wait that extra time when being attacked. 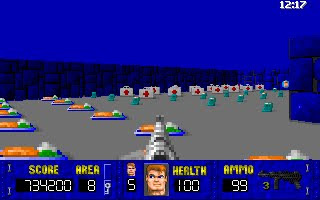 Voting Results;
1st - AReyeP: Cat N' Mouse (13 Votes)
2nd - Serpens: Sentinel (9 Votes)
3rd - RonWolf: Dogs (6 Votes)
4th - Arielus: Smoothness (4 Votes) & Ack: Shreds of Pain (4 Votes)
5th - Adam Biser: Entryway (3 Votes)
6th - Rocketboy: The Chateau (2 Votes), Dean: Gatekeeper (2 Votes) & Thomas: Redux (2 Votes)
7th - Tricob: retro Shapes (1 Vote), MegaByte: Invictus (1Vote) & Adhesive Boy: Whoops... (1 Vote)
8th - CodeTech84: Familiar Shape (0 Votes) & Haasboy: The One Domain (0 Votes)
Withdrawn: BrotherTank: Hitler's Revenge*
*BrotherTank withdrew his submission when, as the project co-ordinator, further changes were made to the exe after the level submissions were made that caused some undesired asthetic changes to certain levels. I remember being one of the level makers that commented about the changes affecting my level at the time but was dissapointed that BrotherTank chose to take the action of withdrawing his level like he did, I don't believe this was anyone's intentions.

Wrap-up: Another great DHW Community set that had some of the Community's best mappers contributing. The levels and styles were varied but thats a main factor for me for why these are so good and still stand up today.

You can read AReyeP's review of each level HERE also.

Disclaimer: All reviews are only my opinion when playing the mod and are not intended to discredit anyone or the hard work they have put into creating their mod.
Posted by Dean at 2:29 pm