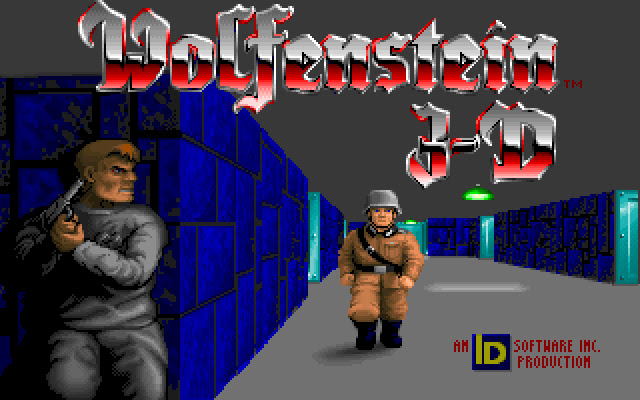 Initial impressions: As a first release this is a very respectable and quiet playable mod. John has obviously spent time playing the original Wolf 3d game extensively as there is quite some resemblance, which is actually a compliment to the game. Unlike most of John's other sets, this is a full 10 level shareware set with Brian Lowe completing the Level 10 secret level. There levels are of decent size and bare some resemblance, in parts, to the original Episode 1. John predominately sticks to the same themes of wall usage with the Grey brick and slime covered versions appearing throughout most levels. The Red brick and blue prison walls appear sporadically but do mix things up nicely. John mainly sticks to the original guards and SS as enemies in this, which is a nice change as a lot of his latter mods contain almost entirely mutants, although I would of liked to have seen the officers used a bit more. 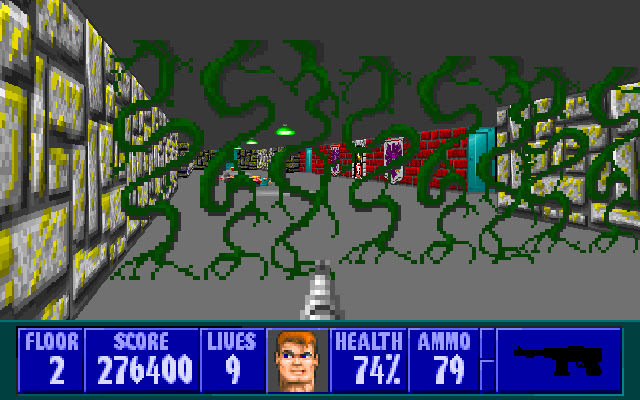 Gameplay: The gameplay is quite challenging and has been constructed to keep things interesting and challenging at most times. While the player can find some moments for respite it's always advisable to be very careful of your location first. There are large numbers of guards used throughout, and with clever use of floor codes, John keeps them coming at the player on a consistent basis.
Most maps follow a fairly linear path but do quite often have rooms branching off others that need exploring for those looking for perfect scores, otherwise it's fairly easy to get through to exits with only experiencing portions of the map. Careful procession is advised rather than a more run and gun although retreating for safety is something you will still probably find yourself naturally doing as certain onslaughts continue, especially when falling dangerously low on health and ammo.

Mapping: The mapping is really quite good in this and was better than I was expecting for a first release. John does like to use the grey brick wall and it's variants way too much but there are sprinklings of the red brick and blue prison walls throughout also. John uses his floor codes quite cleverly and often you can hear the scream of an alerted guard in a nearby room when you fire shots, this adds realism as firing a chaingun should would make some noise that could quite easily be heard nearby!
One thing I'm not such a big fan of is John's use of secret walls. I like that people use secrets but throughout this I found too often that secrets MUST be found in order to either find keys, or to be able to continue onwards through the game. I've never been much of a fan of this and prefer to have a level laid out where those that are in need of extra or like to find 100% or everything will be rewarded for looking but those that just want to run through the levels can do so without having to take time to search walls for the next passageway to be able to continue onwards with.There is a little lighting used in the passageways but most larger areas have some minimal lighting used. Sprites aren't used in abundance but there has been liberal use of the more 'bone' related sprites throughout. 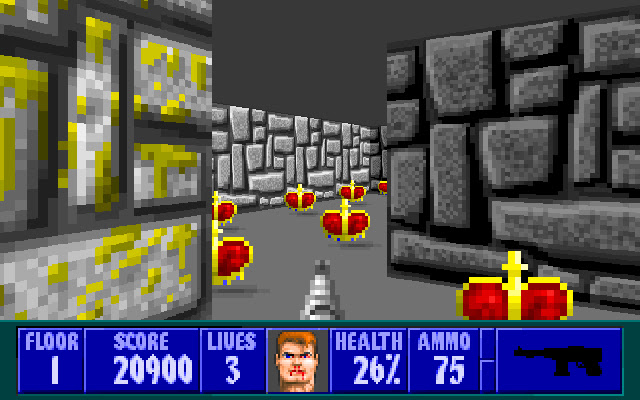 Likes: The Mapping in this is very decent for a first release with some great challenges. The levels aren't all linear and some backtracking is required but the layouts are never repetitive (although the use of the same few wall types can become that way a little) which makes for a challenging and entertaining first up release for John.
The mapping is well done with plenty of twists and turns and not just big square rooms leading to each other. I particularly like how John has used the floor codes so that enemies are constantly coming running from other places.

Dislikes: John's mods, in my opinion are always quite short on ammo which I believe is meant to be fairly intentional. I'm aware that He always tries to make mods that are for the more experienced player but sometimes a LOT of times can be spent backtracking to load back up as the distribution of ammo can be a little light on.
I'm a mapper and player that has a preference for the crown treasure item to be only be used lightly but John predominately uses it as the main treasure item, in fact you find the first one within the first few rooms of the mod! I just feel that it should have been used more sparingly, more as a reward item (once defeating a Boss etc.) or kept to secret areas.

Wrap-up: This sits as a very decent first up mod from John and shows how he developed his later styles and directions he was to take his modding. There is a some good competition here and the mod is quite enjoyable to play. If you are looking for a set of John's to play that isn't quite as hard as some of his others then this is a fine place to start.

Disclaimer: All reviews are only my opinion when playing the mod and are not intended to discredit anyone or the hard work they have put into creating their mod.
Posted by Dean at 3:42 pm