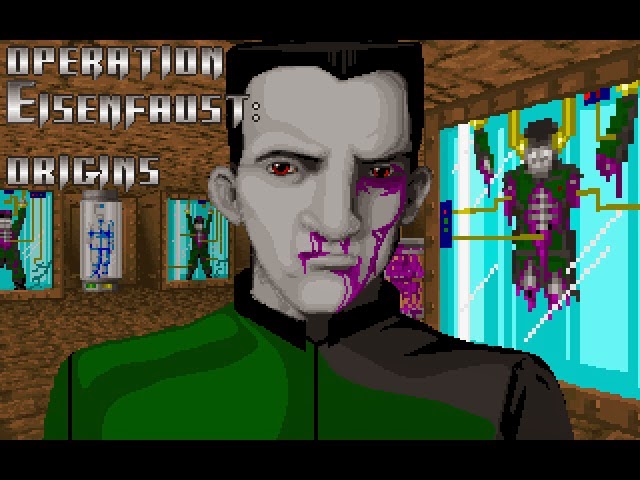 Level 5 was the first Boss level in the mod and the 3rd level I made for the project. I started with the idea of having the Boss be located in the central section and having the player having to kill all the guards surrounding the Boss before then taking the Boss on to retrieve his key and move on. I had really enjoyed the use of the directional sprites that had been added in to mod, especially the wire fences, so they became a pivotal part of this mod. It's the most open level I made for the mod and is relatively easy to navigate, especially if you don't get into the secret areas too much.
Being a Boss level I wanted to make the Boss area well guarded Also, seeing that the Boss was armed with a missile weapon, that I wanted it to be dangerous for the player to battle the Boss due to splash damage and explosive damage from other items in the area. This is a good idea, but I probably didn't realise at the time that it was going to be more damaging to the Boss than the player! 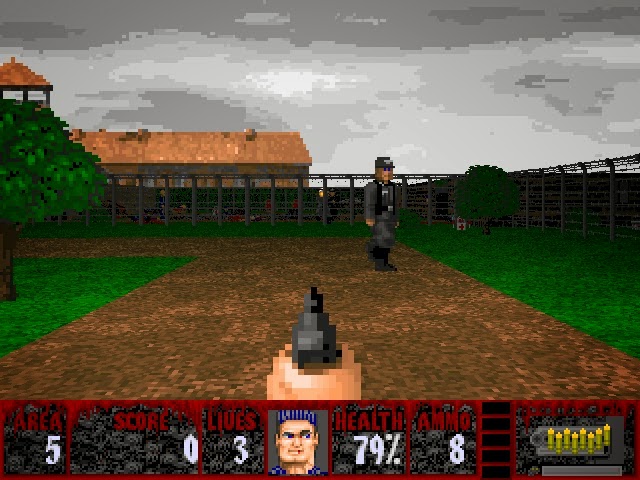 Some other elements I tried to include here were patrolling guards, although of course they all come running as soon as you fire a shot, as well as 4 distinctly different areas the player must progress through in order to get to the end. They were the ovens area, the offices, storage and admin areas. Very little changed from the levels original design with only really secret access to the trucks area being the main thing added later on, as well as other aesthetic changes. I liked the openness of this level especially that there are guards all around you taking pot shots at you, as you would expect of walking around in the open.

The Boss section was reworked as the splash damage was killing the Boss too easily. This was reworked multiple times and, other sprites were removed and added, including exploding drums and a whole pile of hanging bodies as they were just giving the player free coverage and helped make it easier to kill the Boss. Unfortunately we were still unable to get the Boss battle right and if you position yourself right (as shown by Balames87 in his playthrough) then you can defeat the Boss with very little effort.

I feel this is far from the best level in the mod but it does have a concept different to most of the others so that it works well enough. If I had my time again I'd certainly be reworking the Boss section a bit better so that he doesn't kill himself. I am happy with the guard placements in this level and feel that they often surprise the player, especially the turret guys and big machine gun dudes who prove to be quite damaging if you aren't careful.

I'll try to include some other little things that you may not of seen each level I review also, so here's the original 'Get Psyched' screen from Sonder; 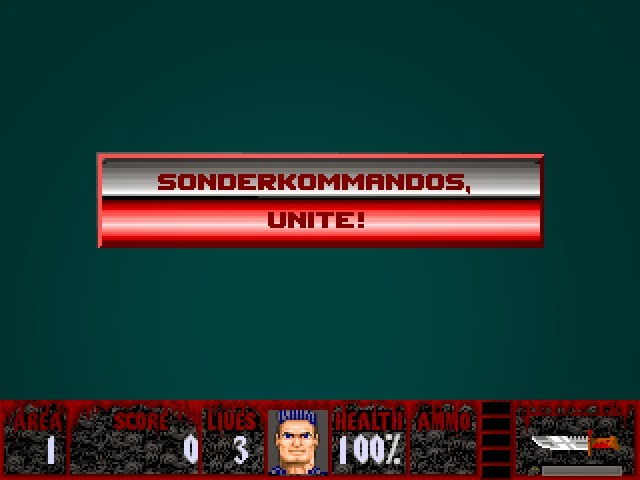 Here's also some more trivia you might find interesting;
- There was originally other collectible treasure items in the mod but as this was a concentration camp setting we found it to be rather unbelievable that treasure items would be hidden throughout, hence the creation of books as treasure items.
- The weather theme progression wasn't worked out until quite a few of the levels had been made meaning that multiple levels were changed for either no snow to snow, or day to night etc.
- There is some difference between ceiling light colours used in certain levels based on Ron or my preferences rather than a uniformal design.
- 3 other people made maps for the mod that Ron and I chose to not use as we felt they just didn't fit with the others that had been made or the direction of the mod. One made it in as a Bonus level after being heavily re-edited.
- We initially made some screenshots of wall, ceiling and floor combinations that each mapper had used so that each other had a reference point for some uniformity, here's one below;

You can watch Balames87 play through of Level 5 below;