Review: A Long Walk Back

Warning! The following article is part of a series of reviews meant to accompany my Youtube playthroughs of various Wolfenstein 3D mods which could not be found on Youtube prior to my effort. This particular review covers A Long Walk Back by Harry Mass Senior. Please note that I often take a closer look at some aspects of the mod, trying to determine why has it escaped the attention of the Youtube community. I do my best to conceal or obfuscate as many details as possible, but some spoilers are unavoidable. If you dislike spoilers, please read carefully. 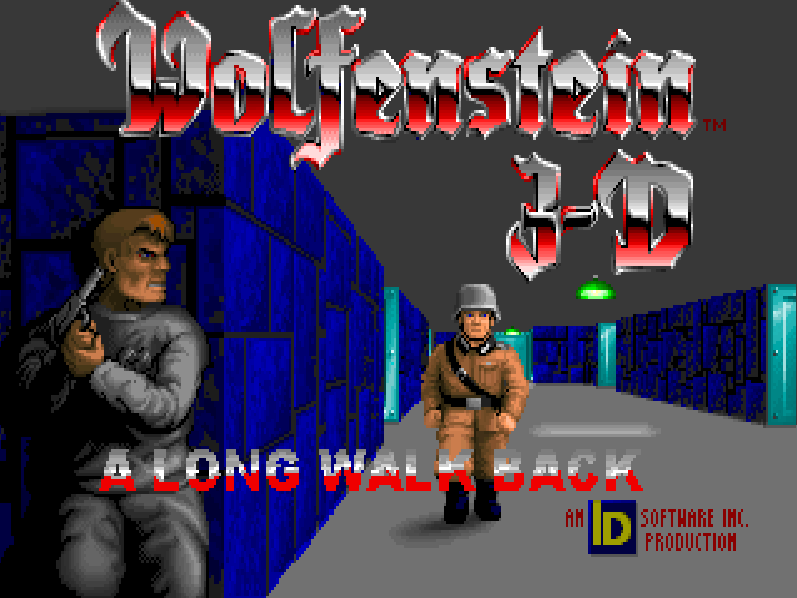 What is this?
Harry Mass Senior is a name familiar to any respectable member of the Wolfenstein 3D community. A veteran Wolf modder and mapper, he has regretfully passed away in 2013, but as you can see, his significant legacy still lives on. A Long Walk Back was released in 2005, a few years after the bulk of his work. It consists of six maps and has received the Dome Award for January 2005. In terms of audiovisuals, this set is pretty much vanilla, with changes largely limited to new ceiling lights and door graphics, some custom ceiling colours and a different order of music (Level 2 being an especially interesting choice). The mod therefore relies exclusively on mapping. So how did its six levels stand the test of time? Let's have a closer look. 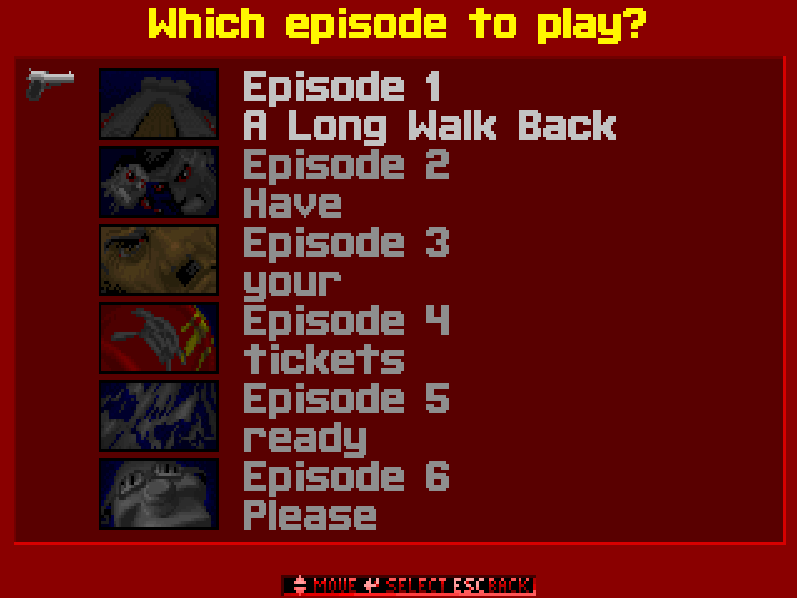 Why is it not on Youtube? (aka The Bad)
One thing is immediately apparent: A Long Walk Back is a buggy release. Buggy as all heck. One of the bugs is mentioned in the Wolf3D Dome description: the gold key fails to show up on your HUD after being collected. It still works, though, so the issue is solely aesthetic in nature and thus decidedly minor. Other errors, however, often affect the gameplay and so are much more serious.

Already in the first room of the first level, the player might activate a pushwall, only to see it stop prematurely in its tracks, blocked by an enemy. The other side can still be accessed, and in fact you're probably meant to activate it from that direction, but how are you supposed to know that beforehand? In later levels, you can find a pushwall which covers up a treasure item, or another one which can be blocked by an enemy for good, both denying you 100% ratios in their respective levels.

Speaking of secrets, floorcodes in a secret room and in the adjacent room are usually different in this mod, which can seriously mess up your interaction with enemies. Usually the issue is not very visible, but in one particular case in Level 5, the player could easily exploit it (or, heck, easily use it by accident!) to trivialize one of the most difficult areas in the game. In turn, the final level has floorcode issues of a different nature, which cause (likely against the author's intention) almost all enemies on the level to pursue the player at once, resulting in a needlessly monotonous and prolonged fight.

There are other problems, too. Some enemies in a certain level reside in a completely inaccessible area (so, again, no 100% kills). Turning points are usually set improperly, resulting in undesired enemy behavior, which is most apparent on Level 4. The same level has a gold key, but no locked doors whatsoever. One level has a second starting position. And finally, there are many instances of what I would call aesthetic errors. Many areas have highly asymmetric, oddball shapes, and decoration placement is questionable at times. However, this is a purely subjective and rather minor issue. 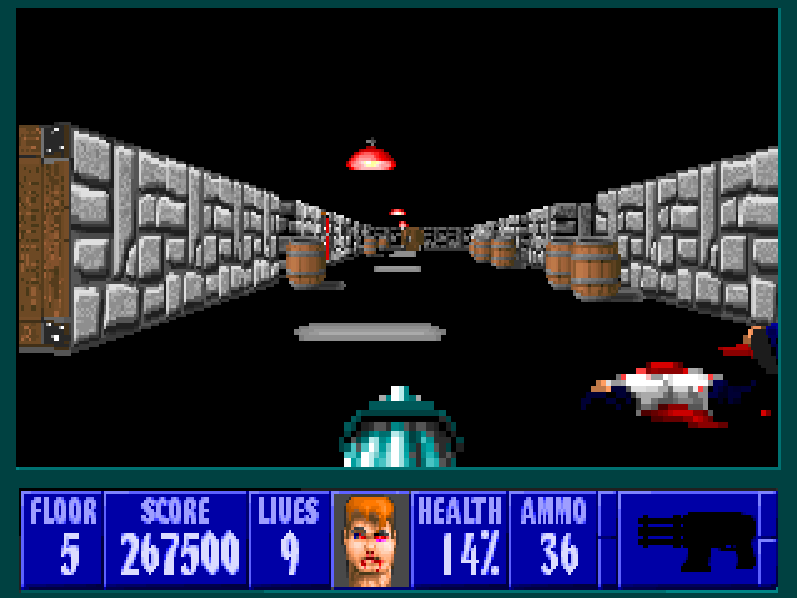 And why does it need to be there? (aka The Good)
So, going by the above, the mod has very little custom graphics or sounds, and the maps are full of things that would never pass as OK in the modern mapping community. Pretty bad, right? Well, WRONG! Even with all the aforementioned issues, the mod is pretty darn fun, and that's because the maps still display a fair amount of flair and thoughtful design in terms of balance and challenge.

A combination of clever floorcode traps, neat surprises, good use of enemy pathfinding and deaf guards all make for some highly satisfying and exciting gameplay. Most importantly, with just a few easily enumerated exceptions, the combat is NOT reduced to slowly whittling down hordes of enemies pouring through the only doorway. Most of the time, rapid movement and correct decisions are necessary to win. It is also a shame that turning points usually do not work as intended, because otherwise the mod would've had some very interesting surprises waiting for the player.

A Long Walk Back throws down the gauntlet as early as the first level, and does not let up. Level 1 is already quite difficult, with numerous mutants and some tough combat scenarios which require some skill and speed to handle effectively. Although the difficulty curve is a bit off the mark, levels 5 and 6 are still the most difficult. Health and ammo is given away relatively sparingly, but if you take the time to look for secrets, you will find easily enough to finish every level in good shape. The levels are very well balanced, difficult but almost never frustratingly so, and quite simply a lot of fun. 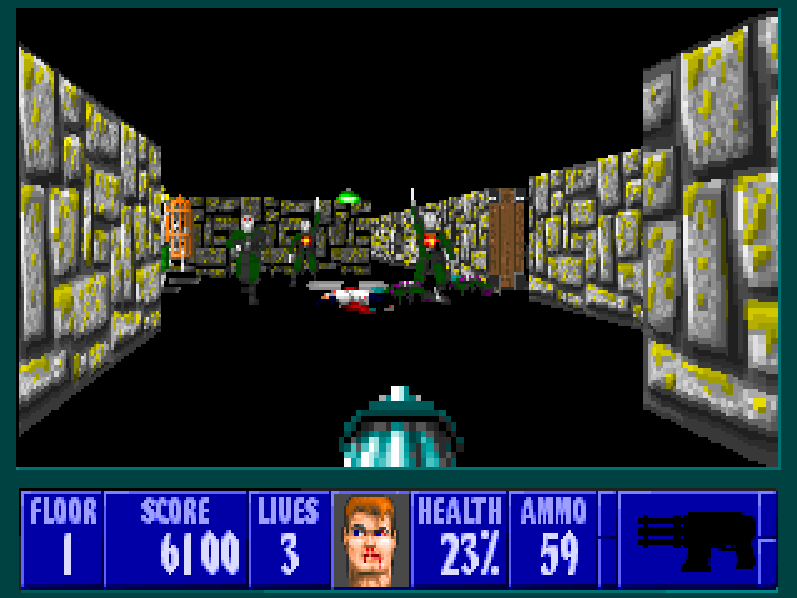 Bottom Line (aka Bottom Line)
A Long Walk Back is a curious beast. Being one of Harry Mass Senior's last releases, it is nonetheless unusually full of errors and problems which were conspicuously absent is his earlier releases. This is unexpected considering the author's experience at that point. And yet, despite all the numerous and often significant issues, the mod is a lot of fun, the maps are neatly balanced and present the willing player with a solid, fairly challenging piece of action. My suggestion: download, play, ignore the bugs, have some clean fun!

Hidden Stuff (aka Beware of Spoilers)
What mysteries does this mod hold? I guess I've already mentioned a few, like the intended (but failed) creative use of turning points, or enemies sitting in an inaccessible area. There are some instances of silver doors which cannot be opened because the silver key is not present in the respective levels. However, those areas are empty, except for some enemies to be unleashed upon an unsuspecting player in a floorcode trap. Level E3M8 from the original game is present in the gamemaps file, most likely by accident, since all the other unused levels are filled with Grey Brick walls.

More interestingly, viewing the mod's maps in the editor reveals a secret message hidden in every single one. Those messages are, in numerical order: "ENJOY MY FIRST LEVEL IN YEARS HARRY SR"; "FUNNEY STUFF"; "NEINSOVA"; "MEINLEBEN"; "MEINGOTT"; "GUTENTA". Amusingly, the "GUTENTA" level does not actually have Hans Grosse as an enemy; the first one does!

Last but not least, you can get the mod by clicking on THIS LINK!

Disclaimer: all reviews are only my opinion when playing the mod and are not intended to discredit anyone or the hard work they have put into creating their mod.
Posted by serpens at 7:49 pm