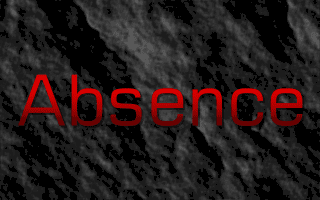 Initial impressions: Absence is a mod I've been meaning to revisit for quite a while now. I have fond memories playing this one, and in general it is regarded as a classic by the Wolfenstein 3D community. The opening level therefore feels familiar, and sets the stage for much of Absence's characteristics - the setting, the tone, its new features, its colors. It's a good opener that makes nifty use of the log files.

Gameplay: In general, the game is a fairly straightforward FPS. There are some differences compared to the original Wolf3D - there are different weapons, of which the accuracy and strength can be improved through experience points. This is a nicely incorporated system, and you can definitely sense that the weapons are less powerful in the beginning of the game. The beginning is therefore also the more tenser portion of the game, as especially the 'zombies' can be quite intimidating and, because of their fast movement, a difficult target. However, once you gather experience points and new weapons, the game becomes quite a bit easier. Boss battles stay challenging, however.

Mapping: The mapping is fairly consistently good throughout the game. Unfortunately, it is also consistently the same. Most maps have a similar structure, with small offices, bathrooms or supply storages branching from large halls. This consistency is not very engaging for a player to go through, and it is for this reason that the game can become a bit monotonous. The colors are consistently gray throughout the game, which makes sense for the setting, but also reinforces the monotonic feel. There is some variety in the settings, as there are also labs and mines, but it is not enough to stay completely engaged with the game. I remember from my first playthrough that I considered the game world to be quite immersive for a Wolf3D mod - and to a degree, it still is, thanks to some of its features. But the mapping is just too similar in too many levels; either cutting some levels, or spicing up the gameplay (with missions, as in some of the later levels) would have done the trick. Having said that, perhaps I make it sounds worse than it is, because the maps are never truly bad - they're just too much alike (and this is my second playthrough, which might also be a factor). And while I can understand the choice, as it makes sense from a 'realistic' perspective, I feel like there was leeway to do more with this engine.

Likes: The coding features are interesting and add a nice variety to the gameplay. I hope to see the experience system return in a more expanded form for a potential sequel, and features such as lasers and computer codes were nice additions to the gameplay - not to mention, more interesting than merely searching for keys. The graphics fit the environment, though their usual lack of more colors can make them feel a bit bland at times. The data discs are a great addition and help keep the player more involved in the storyline. On my first playthrough, they really made the mod an immersive experience. Boss fights were still challenging, e.g. the fast Cybernator Boss.

Dislikes: As mentioned before, the gameplay and map layouts can become a tad predictable after a while. To a certain point, I could predict which enemies were somewhere just based on the type of environment used. There were also some unfortunate choices, such as placing melee and projectile-based enemies behind windows, making it easy for the player to just shoot them while not having any risk of getting shot at. I would have loved to see more sequences similar to the beginning of level 9, with multiple zombies attacking you in an open area. In general, the enemies could have benefitted from traps in open areas. How it is now, the zombies are just too often placed in the side rooms of a hall where, after the first couple of levels, just aren't that challenging anymore. A bit more variety in traps and layouts could have benefitted this mod. 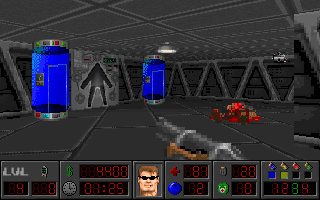 Wrap-up: This mod is definitely still worth playing, and the amount of work put into it is evident. The addition of experience upgrades, passwords for computers and data discs are great features, but it's just unfortunate that the mapping isn't on the same level. It's never bad - but it's too monotonous to keep me engaged throughout the game.

Havoc has released a 'making of' document for Absence that can be downloaded HERE.

Where Can I get it?: You can download the mod in Dos HERE or the SDL version by clicking HERE or on the screenshot at the top of this post. You can read Dean's original review HERE.

Disclaimer: All reviews are only my opinion when playing the mod and are not intended to discredit anyone or the hard work they have put into creating their mod.
Posted by Ronwolf1705 at 12:00 am