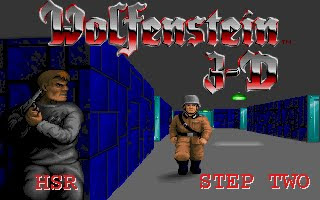 Initial impressions: This has a similar look and feel to Step One, as well as to Harry's previous mods however there's just something in this that really didn't grab me. The first level starts off too hard, you open the first door and there is a mutant standing there right in front of you, as soon as you fire a shot multiple guards start coming at you, this is just a bit much initially in a mod for me, I like to let the player get a feel for the mod and it's surroundings before just throwing them straight into the VERY deep end. The difficulty is the same throughout, no matter what level you play, well, except for Level 3 as nearly the whole level is completely empty of enemies, so you do get used to it pretty quickly.

Gameplay: The gameplay can be challenging but becomes routine as each levels is the same. It all becomes just a bit predictable after a while. Most of the mod is just stand and shoot or enter a room, fire a shot, then back out and wait for everyone to come to you.
There has been an attempt to mix things up with some outside areas but they don't really work that well and otherwise the same few walls are used pretty much throughout.

Mapping: To be honest, the mapping is quite poor in this. There are many rooms with no guards on each level that are full of sprites, as seen below, that just don't need to be there. There is no story so there's no understanding of why things are laid out this way, you don't know where you are or what your mission is, you could be in 'bizarre-o sprite World' for all we know, where this type of thing could be completely normal!
The levels are nearly all poorly mapped with just room after room of similar design, very few secrets, not that they need to be compulsory, but a few more would have made things a bit more interesting at least.
The excessive use of unnecessary sprites goes from levels being over-decorated to just ridiculous, it's almost like the mapper decided to just use all the sprite count he had on each level, just for the sake of it.
There is way too much ammo and health, especially seeing each guard drops a 25 ammo clip when killed. 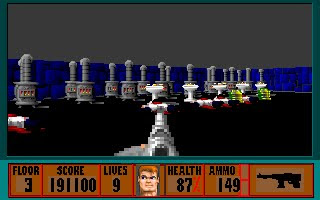 Likes: The challenge is good, at times, for more experienced players but there is just way too much health and ammo around to really test the player.

Dislikes: Some of the mapping is really poor and unnecessary, as outlined above.
Although challenging, the damage and use of enemies is a bit too tough too quickly into the mod, all levels have been made to the same level of difficulty, I'm just more on the side of building the toughness the further you get into a mod rather than throwing it at the player straight away.
The outside areas don't work at all, mainly because the ceiling is the same colour as the inside. The outside attempt gives you a little faux feeling of being external, but not much.
The ammo count is mis-aligned on the status bar as well and hinges over the keys area, it just looks weird and really isn't that hard a thing to fix, this should of been amended before release.

Wrap-up: I was quite disappointed by this and felt that it was below standard for Harry. This just didn't have a great feel about it and just didn't flow like a good mod would, it almost seemed like the creator just threw random bits from other places together and called it a mod, I think the quality suffered from over use of sprites and poor mapping.

The review for the prequel to this mod, titled Step One, can be read HERE.

Disclaimer: All reviews are only my opinion when playing the mod and are not intended to discredit anyone or the hard work they have put into creating their mod.
Posted by Dean at 9:57 am