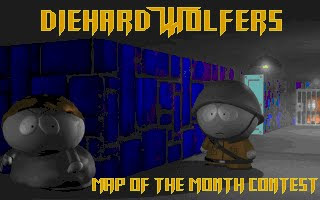 Initial impressions: The MotM competition has really developed with this months competition with the moving away from the standard walls and sprite set and adding addition features like animated sprites, 4 keys and switch operated walls. This was a nice change up an gave the competition a fresh new look while providing the mappers with a lot more to work with. 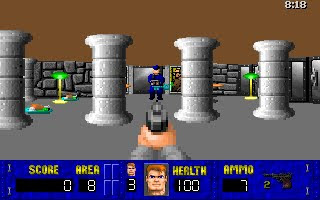 Gameplay: The gameplay is quite fast paced with a lot of enemies on each level and again a large number of Bosses being used. The new additional features changed level styles a little as the player can often have to retrace steps trying to locate new areas revealed by the moving of walls once a switch has been flicked. I thought this might help make more 'common' areas where the player would having to keep come back to and generally make maps smaller but it seemed most people used the newly accessible areas as more like secret rooms with treasure, health, ammo and occassionally keys in them rather than the ongoing way to finish the level.

Mapping: The mapping is a bit mixed in this, with a lot of differeing types of elements that have been used to varying degrees. The blocking codes haven't been used all that much, looking at Thomas' level, thankfully, as I believe it could of made things way to difficult for a lot of players. Most people used more than the standard 2 keys and just like in the July set there were a lot of Bosses used. The switch operated walls were a great addition and I believe used very well by most mappers, they really added a different element to the mapping and the levels as you play them in general.
Most mappers went for levels on the larger size and with the inclusion of the switch operated walls I noticed a fair reduction in the number of secret areas used. There also seemed to be a lot smaller amount of treasure used in these set of maps also for some reason.
Astheticly the levels look beautifully designed with the new wall and sprite set but also as additional sprites were added to the number in the original array meaning a wider variety of vistas becomes available. The levels are generally well decorated as an increased sprite count was also available to the mappers.

The start of Level 1 to this day is still one of the hardest starts to a level that I have ever played and I can understand why everyone hated it so much when it was initially released. Playing it again for this review I again immediately found myself quite aggitated after dying 20+ times while trying to test the level. I understand the intention to make the level difficult but when even very experienced players severely struggle with it then I think you've gone to far, there's not much fun in either dying 20+ times straight or not being able to finish a level at all, ultimately 'fun' is what we play Wolf 3d mods for. 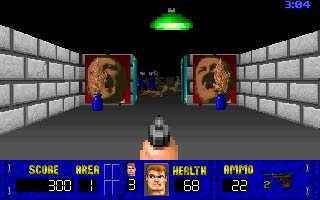 The infamous Level 1 start - looks fairly innocuous!
I was very happy with the level I made for this, I put in more time making this level than for any level I'd made prior to this Month's competition. I had a strong vision of how I wanted to make the level look and it didn't up too far off. Having a chance to map with elements such as the switch operated walls was fantastic as I'd never done that before.
To receive praise from AReyeP, and to have him say how much he loved the level and to say that He thought it was the best map in the collection was an amazing thing to hear, It didn't even worry me if I won or not after hearing that!
Heres my description I wrote about my own level in Sept 2007;

Level 12 - Inner Sanctum (Dean)
- This level took me about 20 hours to create fully
- It still didn't fit my full vision as I ran out of sprites but it was pretty close
- I made the main end section with Hans and the treasure behind switchwalls section first then the treasure room and then mapped around the rest from there
- I actually mapped more backwards then forwards in this, which is rare for me.
- This reminded me of a lot of AReyeP's levels when I was testing it with the layout and thought that some people may think it was his. He later said the same thing to me.
- I was really wrapped to have a chance to use some of AReyep's brilliant wall designs and just HAD to use them in this.

Likes: The change up in the exe used for this really made mappers work extra hard to come up with something new and challenging, sometimes, just because you have more to work with it doesnt mean that you get a better result. It does seem that most mappers in this set have given their levels the required amount of time and effort to help produce high quality work.
From a mappers point of view, the extra tools to work with made this not only a fun experience to play, but fun to map with, especially in the possibilities this openend up and the clever ways they could be used to both reward and surprise the player.

Dislikes: The start to Level 1 - I just simply don't see the sense in making something players either can't complete or will aggrivate them to such a level when playing that they no longer want to play.
The end of level stats seem to be out, especially the secret level %. I believe this is caused by the switch operated walls but it would have been nice if this was more accurate, especially for those of us that like to get 100% of everything. 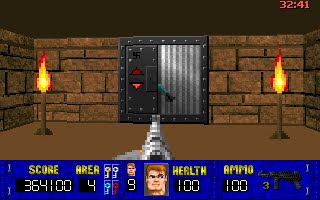 Wrap-up: Another great community set that is both difficult but extremely entertaining to play. The levels are fairly difficult on average and there is so much to discover and play through. The additions of extra keys plus the switch operated walls have made this like no other Community set both in playability and enjoyment.

You can read AReyeP's reviews of the levels HERE.

Disclaimer: All reviews are only my opinion when playing the mod and are not intended to discredit anyone or the hard work they have put into creating their mod.
Posted by Dean at 2:31 pm