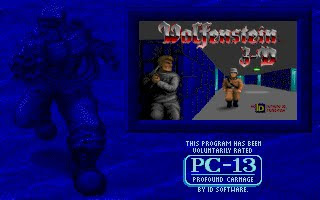 Initial impressions: The exe is pretty much the same as the August set from what I can see, which isn't a bad thing as it's not easy to think of may additions that could have made what the mappers had to map with much better. All the features have been used again extremely well by most mappers with the switched operated walls playing important roles in most maps, especially that of Arielus' outstanding map.
There was only 8 maps in this set, which, unfortunately, started to indicate the either decline in popularity of the contest or the ability of mappers to keeping producing a new map month after month. Moderators of the DHW forum have always been able to see trends of when post counts increase and decrease throughout certain times of the year and looking at those stats now, the popularity of this also seems to mirror those trends. 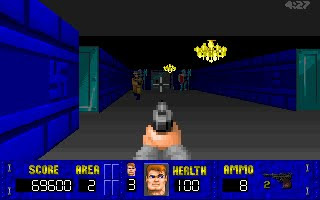 Gameplay: The game play is easily the hardest of any of the sets in this edition. There are less Bosses than in some other months but a definite increase in guard numbers as well as difficult tight areas where the player is set upon by swarms of enemies. There is again some back tracking as switches open walls in various places and there locations aren't always entirely obvious, or even near by for that matter!

Mapping: The mapping this month proved to be the hardest yet as the maps become more complicated and mappers kept pushing the boundary's of the things they had to work with. There seemed to be a lot more mutants than in other sets and even though the number of Bosses reduced the difficulty still increased.Map sizes also got larger for this set and for myself, while testing, found that most levels took well over the 30 minute mark to complete.
Again, most keys and switches were used as well as large numbers of enemies, treasure amounts seemed to slightly increase from the previous months sets also.
This was the first month that AReyeP didn't win, although his map was again, quite outstanding. Ron's had a great, but very difficult, beginning and was made even harder by the fact that there is no Chaingun anywhere in the level. Arielus' level was extremely creative and had a fantastic flow about it, He really used the switch walls better than anyone I'd seen do previously and made them a main focal point of continuation in the level rather than just being openings to secret areas containing treasure, health, ammo or keys. The player does need to be extremely careful throughout this level though as there is a very low level of health placed throughout the level (less than 100 points total!) - proceed with extreme caution! 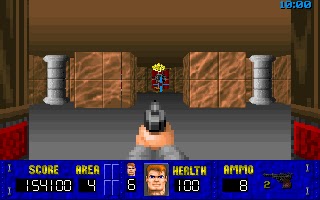 Likes: Everyone rose to the challenge and we saw AReyeP lose his 'Mapping Master' mantle for the first time, and by more than one submission. The anonymity of this competition while voting is one of the better parts of the concept, even though there is certain mapping features that can help identify certain mappers if you look closely enough, and I feel that again, like each previous month, the best map won.

Dislikes:The number of participants seem to be dwindling with this release, although this, like August's release, was clearly the best exe used in any of the months contests. Perhaps the level of complication and features became a little overwhelming and time consuming, as did the prospect of having to compete with AReyeP, arguably the greatest wolf 3d mapper of all time! 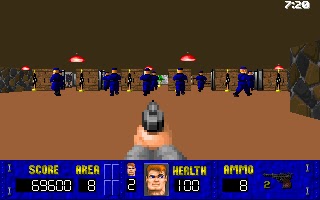 Wrap-up: Another great set with some outstanding levels included. The challenge was really taken up to AReyeP's dominance of the previous months sets, thats not to say that his level wasn't again quite brilliant. This proved to be a difficult set of levels and nything less than experienced players may struggle quite badly.

You can read AReyeP's reviews of the levels HERE.

Disclaimer: All reviews are only my opinion when playing the mod and are not intended to discredit anyone or the hard work they have put into creating their mod.
Posted by Dean at 3:39 pm