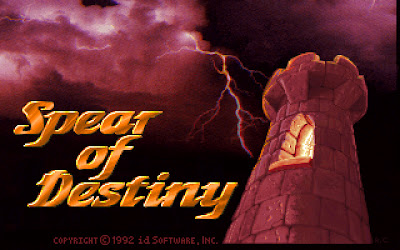 Initial impressions: This is a really creative simply little idea that changes the Wolf 3d is played completely. It features original Wolf graphics but the main difference here is that as the player you get no weapons other than the knife and no ammo, this, obviously, is why the mod is called stealth!
It takes a little while to start to think differently as you natural compulsion is to just charge into any and every room with all guns blazing. As you have no guns, this really makes you think. Some of the main differences is how you attack each enemy and the maneuvers you must undertake to defend yourself from them s you can really only attack one enemy at a time, even the dogs have now become dangerous, especially in packs. Gameplay: The gameplay is nicely paced with enemies constantly coming at you. but not to an overwhelming level, you do get chances to catch your breath. The pathways the player is to follow are fairly linear within the game but there are also some nice layouts and challenges that lead to some good battles. There's more here within the mod than initial looks as there is some really well done mapping and a nice array of enemies and scenarios to keep things interesting.


Mapping: The Maps are really nicely laid out and there has been a lot of thought put into guard placements so that the play can sneak around taking out a lot of guards one at a time. Seeing the player only has one weapon, Ron has cleverly added the ability to back stab, meaning you can kill some guards with one stab if you catch them from behind and unawares. It's not all that easy though as SS generally like to patrol in pairs meaning there is often some backtracking and clever use of walls and angles to cut of there gun fire so that you can attempt to face each enemy one at a time, if the SS bank up behind each other, the game can end rather quickly! 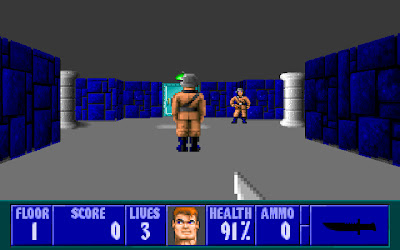 Likes: The only other change up is that the Officers can't be killed. What, I hear you think? Well, this only adds to the challenge as the player has to now be careful to do something they've been trained not to do in Wolfenstein 3d and that's to not be seen or heard and not kill every living thing in the entire map! Ron has cleverly removed the Officers from the actor count so that those 100% perfectionists like me can still play this and be rewarded with perfect scores for following the creators intentions.
There are no additional walls or sprites, but that's not important here as the gameplay really doesn't require anything to be different from the original Wolf 3d set, it just requires the player to think and play in a more calculated, careful way.

Dislikes: There's really not much here that I disliked, the only thing I could mention is that there is only 3 levels when after playing them you are craving more!

Wrap-up: I found this to be an outstanding idea and a really revolutionary way of playing Wolf 3d. This is listed as a demo so I'm really hoping there will be more levels to come. Ron, in my opinion has become one of the best mappers in the Community and has consistently produced very high quality maps for a number of years now, this is no exception.
I enjoyed this so much I'm tempted to have a go at making a 'stealthy' set of my own!

Disclaimer: All reviews are only my opinion when playing the mod and are not intended to discredit anyone or the hard work they have put into creating their mod.
Posted by Dean at 6:26 pm