Love it or hate it, mobile gaming has become something of a cultural phenomenon, and it seems most people who consider themselves to be hardcore gamers are either in favor of or against it, with very little middle ground. While some people appreciate its convenience and are amazed at the complexity of what developers are able to cram into a mobile game, others don't consider smart phones or iPods to be true gaming devices, and don't consider those who play them to be "real gamers". Well, regardless of where you stand on the subject, the fact remains there are a boatload of mobile phone games out there, and it was only a matter of time before Wolfenstein 3D found itself on the mobile platform in one form or the other.

One issue a lot of people have with mobile games is the controls. With few exceptions, you're either playing the game using a keyboard or a touch screen (I know of at least one model of phone that tried to cram a PS3 type controller into the phone instead of a keyboard, but it sounds better in theory than it is in reality). I've played with both, and while either format works fine for strategy or puzzle games, it pretty much blows for fast paced action games. I was able, several months ago, to get my hands on an Android version of the original Wolfenstein 3D, and while it was basically a direct conversion of the original PC game, I'm sad to say it was basically impossible to play with any kind of speed or precision on a smart phone. The "developer" who converted the game to mobile format didn't have id Software's blessing, though (for good reasons obviously), and was since made to remove the game from the market. Luckily, the folks over at id Software had their own ideas about what Wolfenstein for the the mobile format should be, and so, I present to you their contribution, Wolfenstein RPG! Now, I know what you're thinking...the father of first person action shooters turned into a roleplaying game? How can such a creature exist? Believe me, I had my own doubts before I actually played the game, even being a fan of both genres. FPS games tend to send you flying around, guns blazing, while RPG's usually present a slower paced but more story rich experience, and to mix the two would seem like it would only result in a really mediocre game. For my part, I'm happy to say that that wasn't my experience with Wolfenstein RPG, in fact, I enjoyed it almost as much as I enjoyed experiencing the original game, and that's no mean feat! 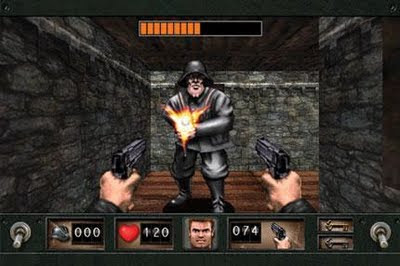 As you may already have guessed (or seen in the screenshots), game features our favorite Nazi battling hero, BJ Blazkowicz, and yes, he's still fighting Nazis, among other things. story-wise, the game begins much like both the original Wolfenstein 3D and Return to Castle Wolfenstein. BJ escapes from a prison cell, and must gather weapons and items on the fly, while doing his best to avoid being shot full of holes or torn to shreds by some nasty creature. The environments and enemy types bear more of a resemblence to RTCW than they do Wolf3D, but the overall story and ultimate mission goal are completely unique, meaning this isn't just an RPG rehash of a game that's come before. As you can tell by the screenshots, the graphics are done in an art style unlike Wolf3D or RTCW, but they still manage to capture the feel of a Wolfenstein game. Granted, they have a slightly comical flavor to them, but there's a good reason for that. 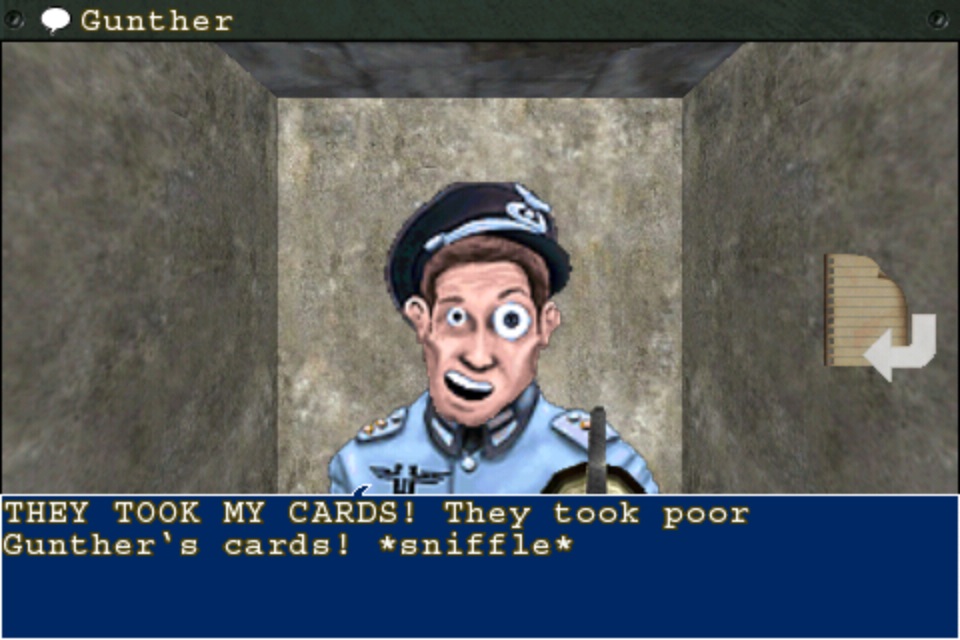 The original Wolf3D was, for the most part, a fairly serious game, with elements of very subtle humor (and some not so subtle, like the Pac-Man maze). RTCW continued that tradition, once again, maintaining a mostly serious tone with some odd injection of humor here and there. Wolfenstein RPG, on the other hand, blends classic Wolfenstein game storytelling with a very bizarre flavor of humor that, in my opinion, didn't distract from the game. Most of it is blended into the dialogue and is very dry, then on the other hand, we have the Chicken Kicking mini-game, or the crazy Nazi, Gunther, who shows up at odd times to challenge you to the card game WAR, because hey, who doesn't have time to play cards when there's an army of Nazis gunning for you? Anyhow, the tone of the game is kind of hard to describe, and really needs to be experienced to be fully appreciated (or hated).

Well, I've talked quite a bit already, and still haven't touched on how exactly the gameplay works. Just like Wolf3D or RTCW, in RPG, you navigate different indoor and outdoor environments, but rather than running around from point A to point Z in one continuos dash, the environments are divided up into invisible "squares", and you move one "square" at a time. And while BJ is moving, the enemies in the level are moving in a similar fashion, one "square" at a time. Unlike the other Wolfenstein games, though, the enemies must wait for BJ to finish moving a space or attacking before they make their move, so even if an enemy is standing right in front of you, if BJ's turn isn't over, they won't attack. It sounds weird, and possible even a little annoying, but the benefit is that rather than having to choose a weapon on the fly and start shooting before you get shot back, this form of gameplay allows the player to examine which weapon is best suited to deal with the threat at hand, then respond accordingly without getting killed during the thinking process. On the down side, this slows the combat aspect of the game down quite a bit when you compare it to other more traditional Wolfenstein games, so this could understandably be a deal breaker for RPG haters or fast paced action buffs. Other RPG elements featured are the ability to level and increase overall health and stats, a fairly large inventory capacity for healing items, weapons, and other pickups, and the ability of enemies to dodge or receive critical damage from player attacks. Also, the player is required to talk to NPC's (non-player characters) rather frequently to progress the story. All of these features are actually implemented rather well into the gameplay (in my opinion), but again, someone who just simply doesn't see the need for this sort of thing in a FPS could likely be turned off by these elements and dismiss the game rather quickly. I'll be honest...I can't recommend Wolfenstein RPG to everyone. People who just plain don't like RPG games aren't necessarily going to love this one just because it's set in the Wolfenstein 3D "universe". Likewise, fans of traditional RPG's may not be impressed by Wolfenstein RPG because of it's resemblance to and gameplays aspects of a FPS. If you approach it on its own terms, though, without any real specific expectations, you may find yourself pleasantly surprised, as I did, and enjoy it as a unique chapter in the Wolfenstein saga (it actually has numerous tie-ins to the Doom saga too, but that's an entirely different topic). At the time this review is being written, the game seems to come and go on the different mobile formats (iPhone, Android, even multimedia phones), and it's been around for a while, so I suggest if you're interested in trying it, get it while you can, because it may not be around forever (depending on the format, you may or may not have to shell out a buck or two for the download).