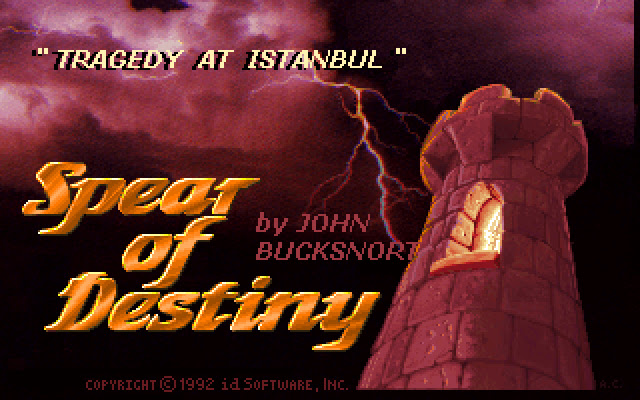 Initial impressions: Wow, so this is the mod where John's renown toughness of enemy battles starts! From the very first room we are confronted with the below screenshot, a room containing each of the 4 guards in the game, including multiple officers that just charge straight at you (Depending on which difficulty you start the game on of course)! 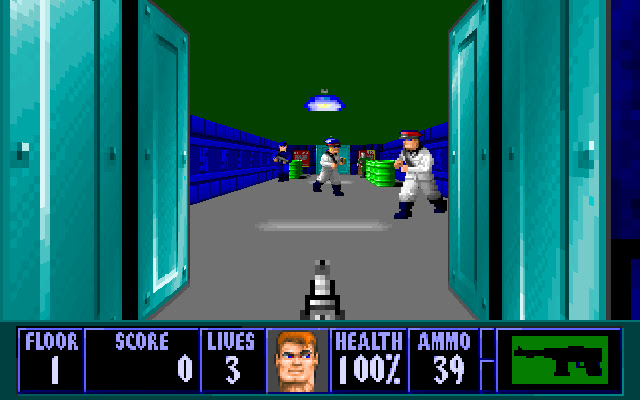 From then on out it's heavy guard levels pretty much right through the level. In this John has utilised the officer a lot more than he has previously, which I was very happy to see, although he still predominately hits you with numerous SS and officers in most rooms.
John, for the first time, has done work on changing the menu, title screen and status bar using a distinctive black and blue look. There has also been more work on sprites done with more recoloured versions of sprites including ceiling lights, the 25 ammo box and an improved 25 health box. John has also added in a wall variant that fits quite well with the original wall set.
The mod title doesn't seem to have much reference to the mod itself although from further research it (The title) does appear to reference, somewhat, to real WWII battles, ultimately it's just a name and the mod quality itself is what it's all about!

Gameplay: The gameplay is very fast paced and quite difficult as John just continuously bombards you with large volumes of guards in every room. A couple of ways that John maps to make things difficult are by setting floor codes so that adjoining rooms have the same floor code that you are currently on meaning guards will often come running from, sometime several, adjacent rooms. Another way is to have various passageways extend off rooms that larger battles have so that guards placed within those passageways will take a little longer to arrive to the battle hoping to catch the player unawares upon their arrival. A lot of these areas are tightly mapped and not always immediately visible from the players immediate vantage point just inside the doorway. This is a clever, albeit challenging mapping that, in this type of mod, means the player needs to be on their toes ready for anything at any time because there could be multiple enemies could all just be running your way at any possible time!

Mapping: From reading back some very old posts at the Wolf 3d Dome I discovered that this mod was originally intended to be a full 21 level SoD mapset. It was released at 11 levels and was also mentioned at the time that it may be updated to a full 21 level set at a later date but it appears that was never done, the mod certainly doesn't suffer from not having the additional 10 levels though and works very well at the size it is.
John again uses his multiple floor codes trick making things as difficult as he can make them with often guards coming running from all over places to find you. When he does do well is that sometimes you hear guards from, off the distance shout when you fire a shot but it can either be sometime before they find you or actually don't and seem to be more in an active frenzy waiting for you when you find them! 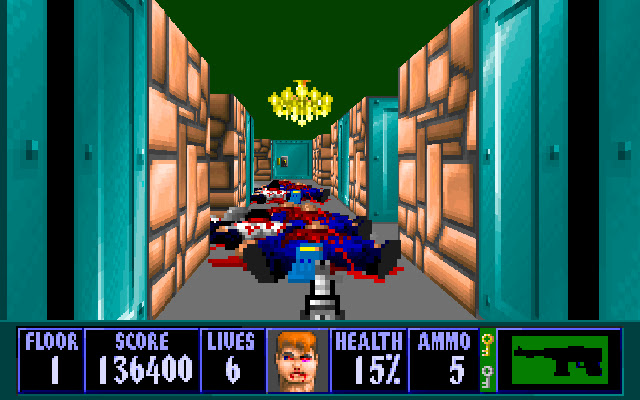 John does use the biggest treasure item, the crown, a bit too liberally again for my liking in this, in fact the below screenshot is taken in the very first secret level which you can be in within 1 minute of starting the mod. Although he does use the other treasure items more in this than his previous mods, I just feel the main treasure item should be worked for a little harder by the player than just handed out so quickly and easily. There are so many of them scattered throughout the 11 levels that I passed the 1,000,000 point mark twice, the first time in only the 5th level of the game! 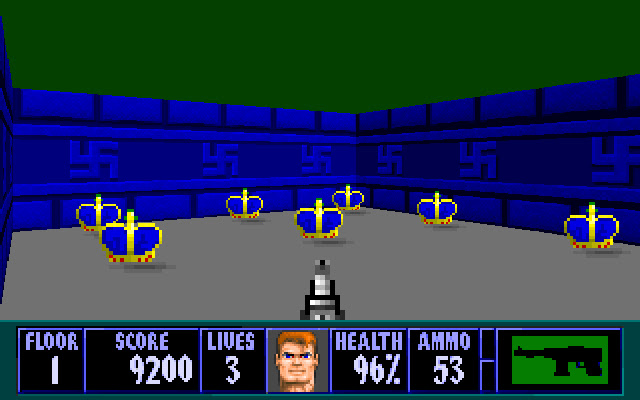 The mapping is very decent throughout the mod, there are some periods of maziness and again most keys are hidden in secret areas forcing the player to have search for hidden areas in order to be able to proceed. It's also nice to see that John has used more than 1 Boss in this set, and with a changed level count you don't quite know when they are coming.
Level 6 is a terrible mazey level that I really didn't enjoy but the rest of the levels make up for this. In fact the set would of run better as a 10 level set with Level 6 left out IMO. Levels 5 & 7 are tightly packed small roomed levels where you need to take extreme care at all times. The secret level was made by Brian Lowe and compliments the other levels mostly, except that Brian takes a little more of a softer approach to guard levels giving the player a somewhat welcome reprieve!

Likes: There's other mods that I've played, and some I've reviewed where I've felt that the guard volumes are too high which makes the mod too difficult but there's something different about John doing it in his mods. For starters, anyone that's played a Bucksnort mod knows what they are getting themselves into, you don't play these for a nice Sunday afternoon walk in the park. John has very particularly geared these mods towards not just experienced players but pretty much the most experienced players, and in reflection I'm guessing that John has made these for himself, for what he likes and the challenge he would be hoping to get out of a mod. Looking at things this way gives not only a clearly perspective as to why he mapped the way he did but also as to what he liked, wanted to have represent his mod making legacy with and ultimately wanted to play himself.
John uses his wall selections quite creatively although he does still mainly stick with the grey brick walls and slime walls. The new additional Brown brick wall fits in quite well and is used nicely also.
John has also, for the first time, changed things up a bit visually by adding in his own menu's, statusbar and title screen, these really take big steps towards personalising John's mods and make them more his own rather then just an original set remapping. I really like the blue themed treasure and ammo sets that John has taken to using, the new keys look great and the recoloured 1up is also particularly well done. This also seems to be the first mod that John's ceiling fan appears in, that I know is to appear in most of his following mods.

Dislikes:Is it just me or is the '0' on the statusbar 1 pixel smaller then the rest of the numbers? I never noticed this while playing, it was only when I started placing the screenshots in the review I'd taken, did it stand out to me, now I just can't stop noticing it and have now probably just done it for you also, haha! 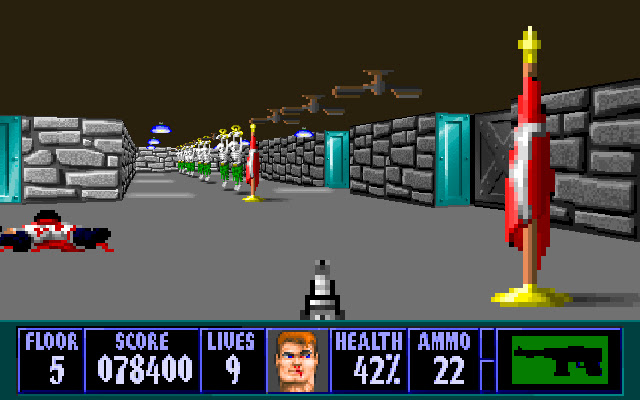 Wrap-up: There's something about this mod that seems to leave you with the impression that guards are chasing you with more intent than in other Wolf mods and I'm sure that feeling comes forth from John's heavy handed guard usage, guard placement and mapping. John has obviously decided to purposefully make his mods challenging and to suit them towards the more experienced player, which is actually pretty clever seeing they are the type of player that will predominately play his mods.
If you are looking for a mod challenging, harder Bucksnort mod to play then this is certainly a good place to start, but be prepared for a tough challenge!

Disclaimer: All reviews are only my opinion when playing the mod and are not intended to discredit anyone or the hard work they have put into creating their mod.
Posted by Dean at 12:09 pm