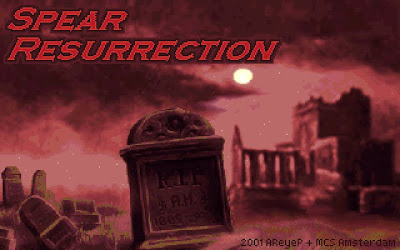 Initial impressions: Dean has reviewed this mapset for Spear Resurrection before, but I wanted to take another look back at this mod, now that the hype is gone and the dust has settled. This is an entirely new set of levels made by AReyeP to celebrate the 10th Anniversary of Spear Resurrection being released. From the very first level onwards, there is one thing that is very noticeable as different from the original version: the increased limits for the number of sprites and actors on a level. The levels feel richer and fuller because of this. There's more variety in color, and the woods at times feel like an actual wood because of the large number of trees. It draws you into the game world even more. It's great to see a mapper make the most of the potential that lies within the removal of limits.

Gameplay: AReyeP's levels are often characterized by the fact that there is a noticeable idea behind his levels. Sometimes it is building up towards a big set piece, other times there are multiple sequences where different tactics are required in order to finish a level. He knows how to use his features, but he also knows how to exploit the limitation of the engine. The AI of the enemies, for instance, is, as is the case with most mods, not that smart. But AReyeP seems to be able to use their dumbness in such a way that it creates a challenge for the player. He seems to have such a handle on the enemies and how they will react that he can always get the most out of it. And that's impressive. 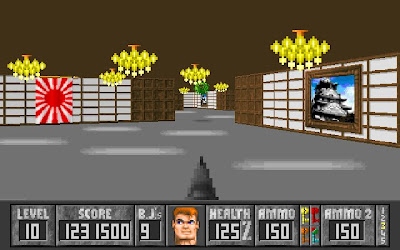 Mapping: The bar that AReyeP has set for himself is very high, but overall I'd say that this contains some of his best levels. However, I also believe this set contains his worst level that I have encountered. Because in all honesty, I found level 18 to be a major disappointment. Especially the first half, where you are battling against the Baron, is almost cliché. A small map where you constantly have to run and gun, hide behind walls to evade the Baron's gunfire, after which you fire some shots yourself. It's not bad per se, but when you set the bar as high as AReyeP has done with his mapping, a map like this feels uninspired. You expect more from the final level. The second part doesn't make up for it, but it at least has some tense moments because of the addition of the various ghosts that haunt you throughout the level. It keeps you on your toes, thereby creating the tension the first part of the level so thoroughly lacks. But luckily, that first part of the level is the only real clunker in this set. The rest is outstanding, containing smart and inspired scenarios that force the player to constantly rethink his/her tactics. In that regards, AReyeP always brings a large variety to his maps, and it makes the player want to keep on playing as he rarely repeats himself. It's what makes him one of the few mappers in the Wolf3D community whose levels are legitimately equal to those done by professionals.

Likes: The increased sprite count has been used to its full capacity, with every level and every area bursting with decoration and design. And next to that, they are often integral to the design of the level; they are not just there to show off.
Overall the mapping is fantastic, and some of the best you'll ever encounter in a Wolf3D mod. It's not for nothing that when the best mappers of the community are discussed, AReyeP is always one of the first to be named. That isn't hype, or based on his past work; he's just a genuinly fantastic mapper.
Dislikes: Level 18, most notably the first part of the level, is a bit too easy and feels uninspired. The second half is better, and I like the halls containing Hitler's tomb and the Spear, but apart from that I consider it to be somewhat of a disappointing finale. Which is unfortunate considering the heights AReyeP's mapping reaches at times. This just isn't the final level such a collection of maps deserves. 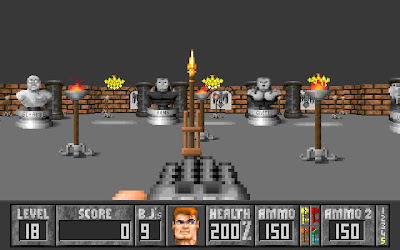 Wrap-up: A fantastic set of maps with the disappointing finale as the only negative, this edition of Spear: Resurrection is another must-play that contains some of AReyeP's best mapping. I can't say whether this or the original is better, as this is quite a different beast. That said, why not just play both? They are different experiences, but both are worth it.

You can read Dean's review HERE.

Disclaimer: All reviews are only my opinion when playing the mod and are not intended to discredit anyone or the hard work they have put into creating their mod.
Posted by Ronwolf1705 at 9:00 pm