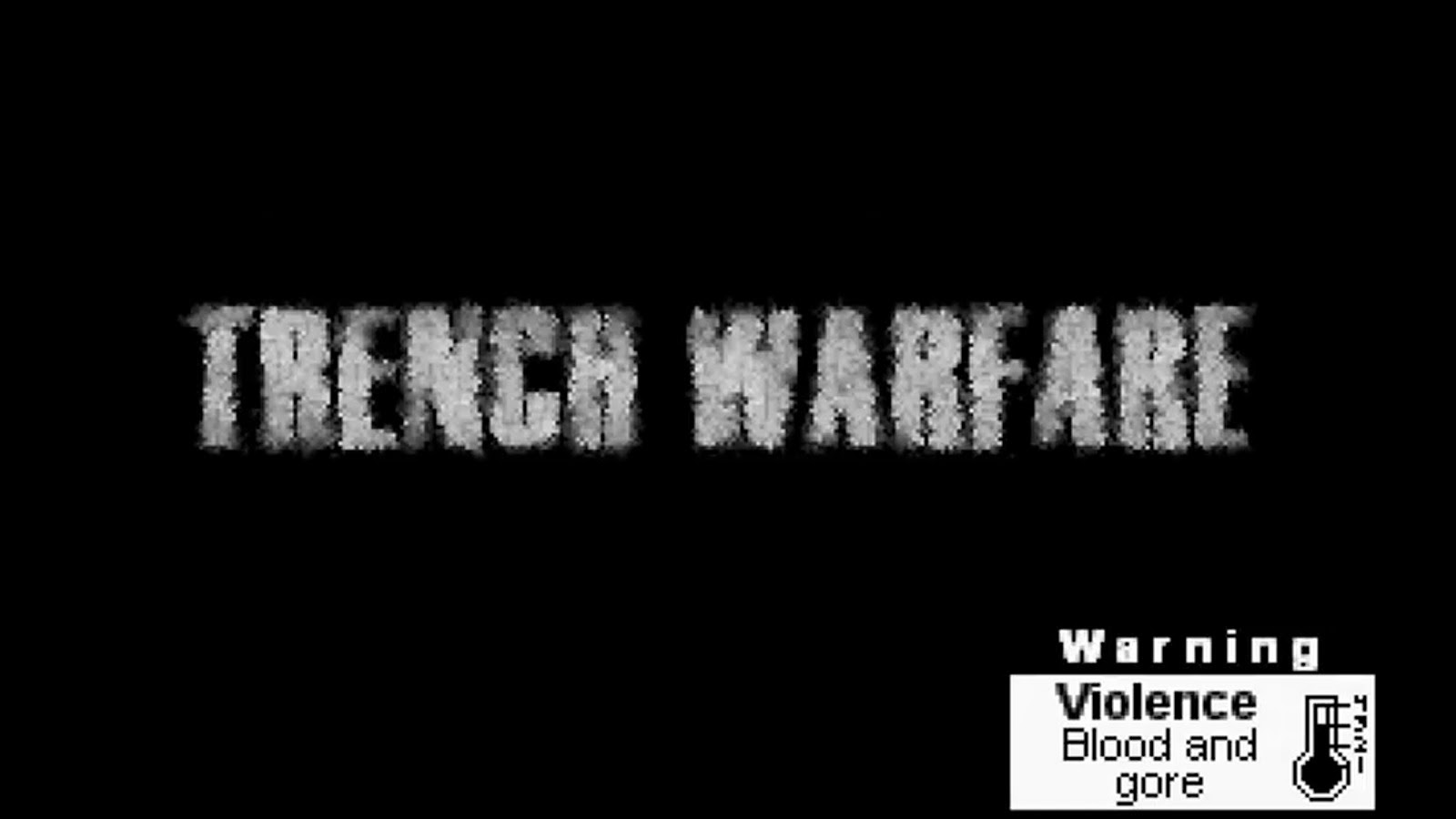 Initial impressions: You play as Sgt. Raynor, a one man army that has to return some documents stolen by the Nazi's. What is immediately noticeable is that everything from the original game has been replaced with new graphics: the menu, the start up screen, the statusbar, etc. Everything is new, and this helps to immerse the player into this new world. The mod feels like its own thing, and that is always a big plus in my book. This continues once the game is started, the graphics instantly make a big impression. It feels like its own world, and the use of shading enhances the atmosphere as well. It is foggy and rainy, and the brown and grey colors gives this mod its own atmosphere. It feels murky, and it really helps you to identify with the main character, who is stranded in a strange, unknown forest surrounded by enemies. 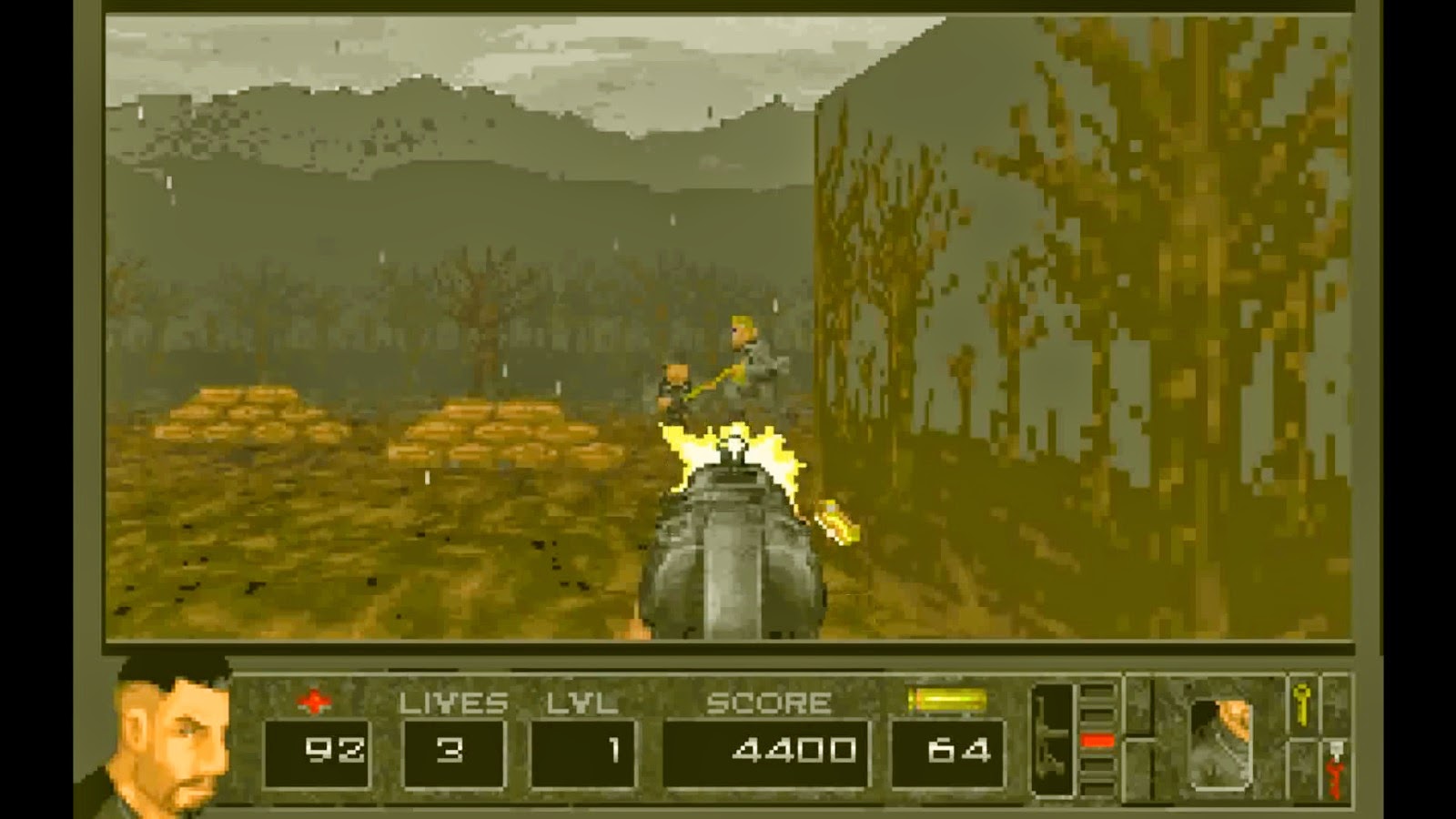 Gameplay: Although the classic Wolf3D gameplay is still there in a sense, there are enough features to ensure that the pacing of the game is nicely varied. The first level is a great but conventional opening level, filled with action. But the second level is where the game becomes more unique, as you have to use a disguise to get past a checkpoint. It makes the mod feel mission-based, and it's a nice and unique change of pace. It makes the mod feel more like an adventure. I'm hoping to see similar approaches like that in feature mods. It's unfortunate that the boss level in the second level is so unenjoyable, though. It's basically the player vs. four Schabbs-like doctors, where the tactic is to constantly peak around the corner and shoot. After the innovative use of the disguise, this feels like a letdown.

Another change of pace arrives in the form of tanks. These are enemies that can only be taken down using the rocket launcher. They deliver some of the best action sequences in the game. I didn't feel the same about the machinegunners, who walked the tightrope between nice change of pace vs. being very annoying. It just isn't as satisfying as blowing up a tank after a fierce battle.

One final thing I'd like to mention is that this game has two levels where the player gets to drive a jeep. These two levels are very short, but to this day it is a feature that has been rarely used in other mods (one other instance being the fantastic Project Weltuntergang by Kuki). And I can see why it is rarely used in other mods. Though it is fun, it is also a feature that is severly restricted by the small size of the map (a grid of 64x64 tiles). I think this feature would work better in a bigger level, giving the player more room to maneuver while at the same time it allows the mapper to create bigger, more interesting scenarios. It's a nice change of pace and quite fun as it is now, but it does feel a bit undercooked. 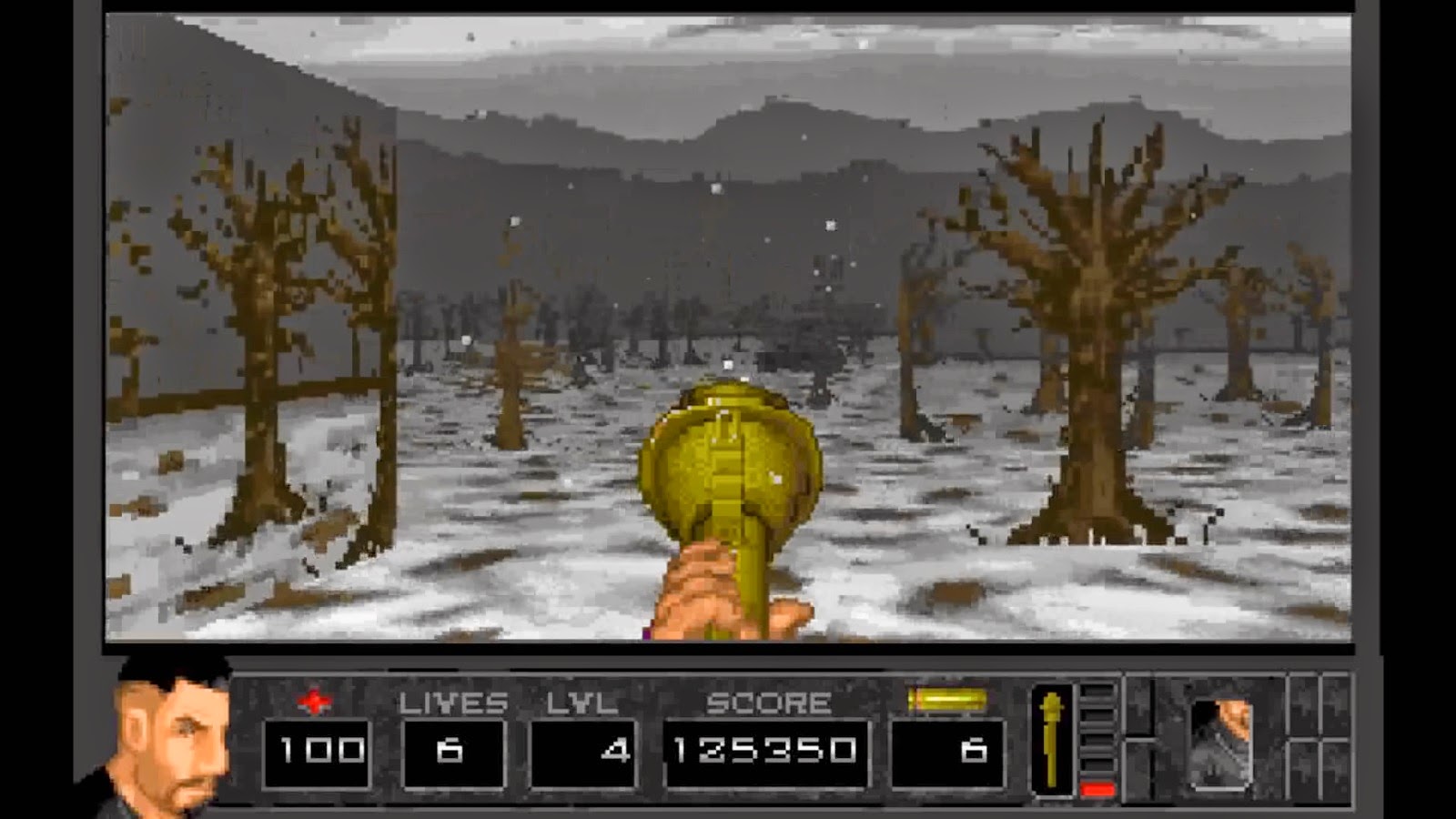 Mapping: The first level is a good level, one that sets up the game quite nicely. Apart from the standard action-style gameplay, it also introduces the player to the barbed wires (a nice inversion of what is essentially a bug in the original game) and the iodine tablets. It is followed by a good second level, though that one does contain a disappointing boss battle. Overall I'd say the mapping is good, but there are a couple of levels that are a bit frustrating. There is the polarizing level 6, on which I'm a bit torn. On the one end, I appreciate the effort to make it feel like a real forest. It is hard to co-ordinate, and it is easy to get lost. It really feels like the player is making his way through an unknown forest. Guards can come out of nowhere, making this a very tense level. However, because it's so easy to get lost/get shot, it is also the most frustrating level in the game. I do applaud the effort though, and I guess it really depends on the player if this level will be considered to be one of the best or one of the worst.

The same goes for level 14, the final boss battle. Once again I appreciate the effort, but it just isn't fun to play. It's frustrating and it bores you, and it makes you want to turn off the game. And that is so unfortunate, because I really don't want to critize this and give the reader the idea that innovation within this engine is a bad thing. I applaud and encourage it, but it also has to fit within the world you've set up. There is a dissonance that is created when you go from action-packed, gun-blazing gameplay to a fist fight; a fist fight where you can't see the boss' health, so you're unsure when you will defeat him. And so trying to punch him becomes a nuisance, a boring, repetitive movement. It feels like you're taking a salsa lesson with some bare-chested German who keeps coming on to you. And that is unfortunate, because it feels so anti-climatic after you've played through such a great mod. 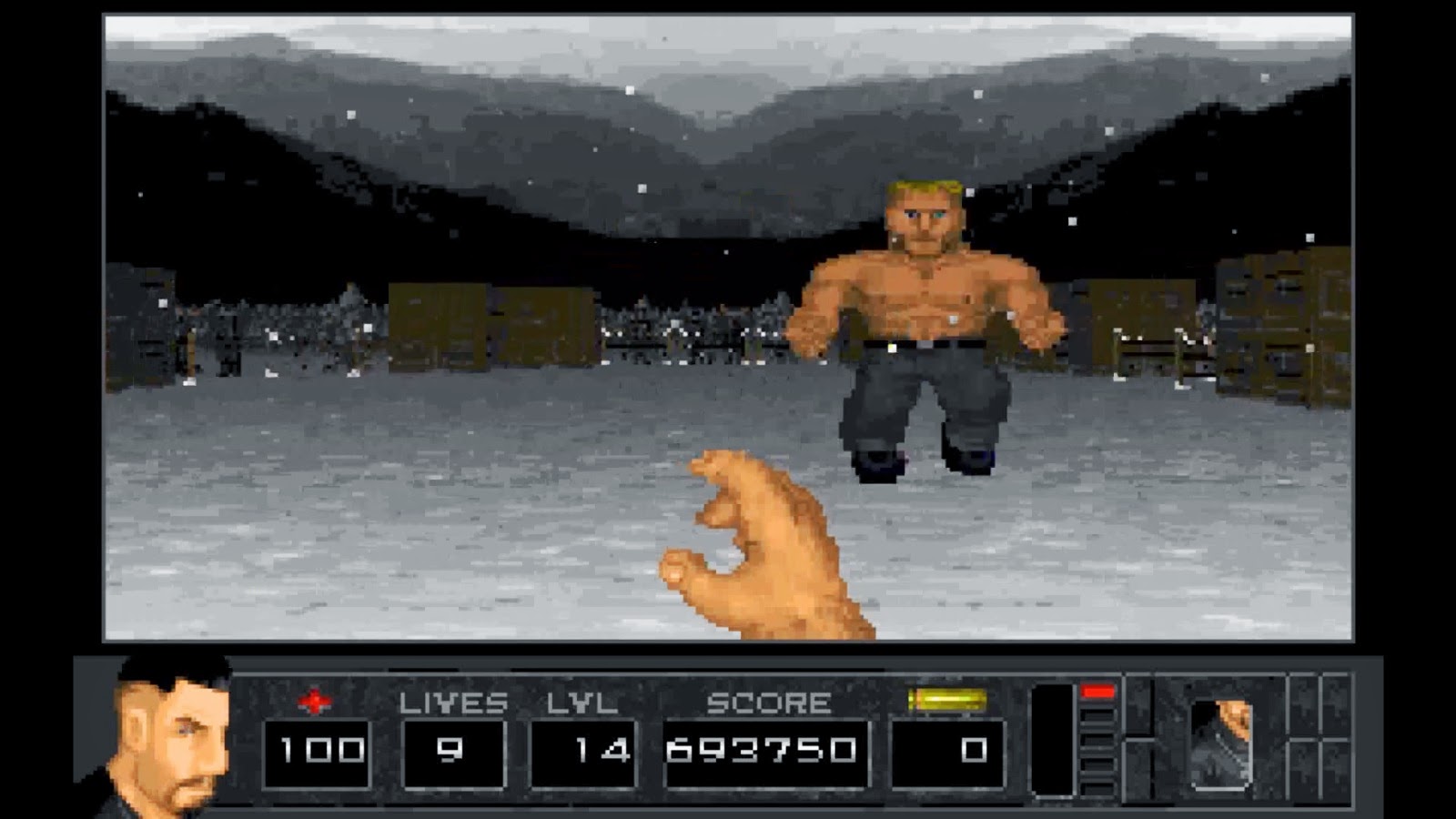 Likes: First and foremost, this mod feels like its own thing. It has its own identity thanks to the new graphics, new sounds, the cool intermission screens, and the new features. It also displays a nice variety of themes, such as: woods, hospital, village, castles and a factory. Thanks to the weather effects and the shading, the levels all have their own atmosphere, which is a big plus. There's also a nice variety in gameplay thanks to the coding features (disguise, driving) and some of the enemies (tanks, fire squad). Finally, I do like the barbed wires. They can be a bit frustrating, but overall I think they smartly exploit a bug in the original Wolf3D source code. I always enjoy it when a modder can make something interesting out of what is essentially an error. Very creative!

Dislikes: I disliked some of the levels. While I'm a bit torn on level 6 (oddly enough, I both like it and dislike it), I have few doubts about level 14, which stood out to me like a sore thumb. The boss levels in general were a bit hit and miss, with the Schabbs-lookalikes in level 2 being more annoying than challenging as well (I did like the other boss battles). It's unfortunate that these levels drag the game down a bit, because the_josh displays a lot of talent in this mod. And overall the mapping is quite good, but it's unfortunate that there are a couple of big missteps. 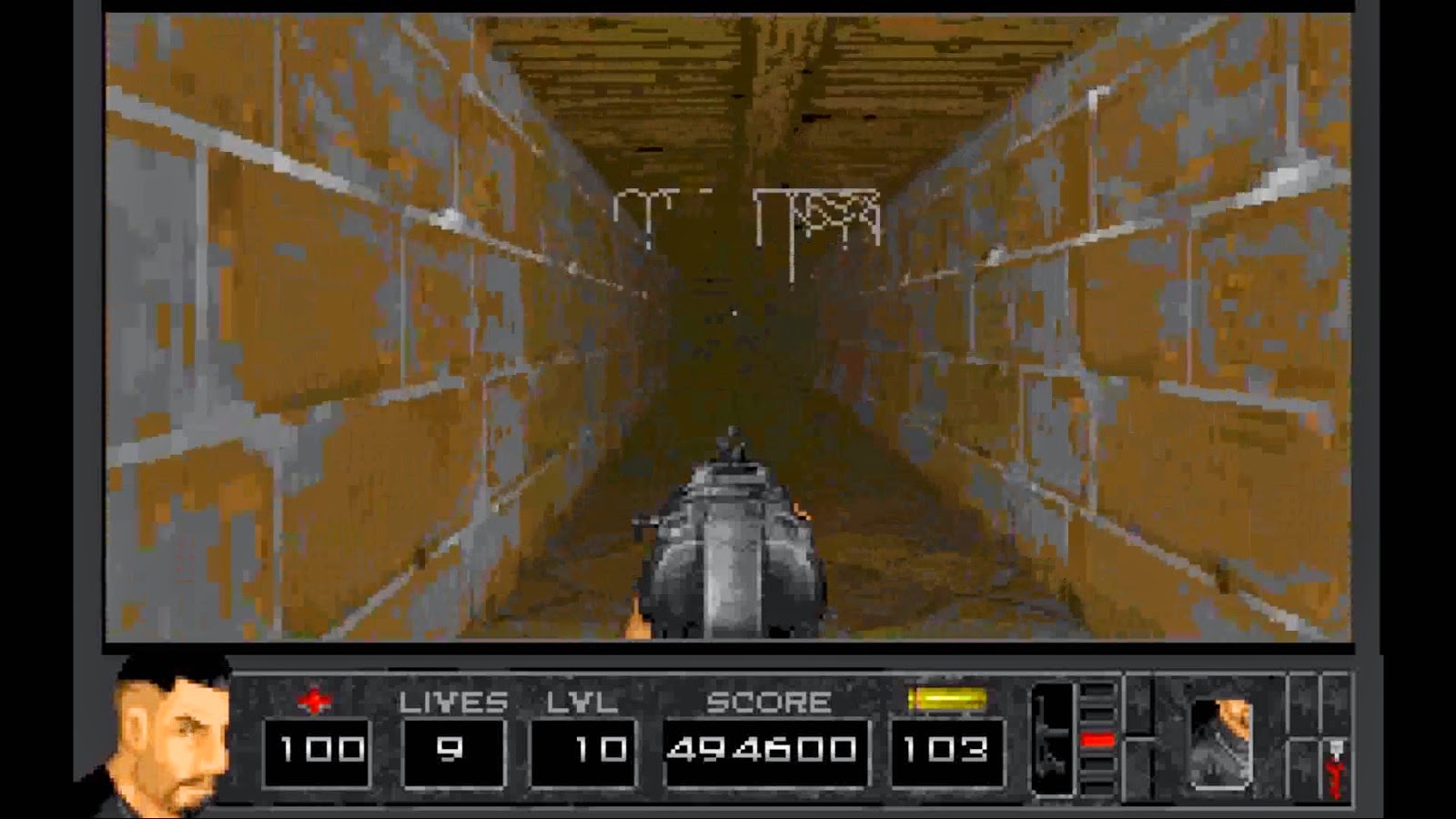 Wrap-up: It'a fantastic mod that is unfortunately bogged down by a couple of disappointing levels. It is definitely a must-play, and I can see why it is considered to be a classic as this mod definitely has its own identity and some fantastic features, but there are moments in this mod that will be polarizing.

Where Can I get it?: You can download the mod HERE.

You can watch Balames87's playthrough of the entire mod right HERE.

Disclaimer: All reviews are only my opinion when playing the mod and are not intended to discredit anyone or the hard work they have put into creating their mod.
Posted by Ronwolf1705 at 2:45 am