Most anticipated releases of 2015

The year 2015 has started off quite well for the Wolfenstein 3D community, with the releases of Nocturnal - iLOW3D and Victory of Faith. Two excellent mods that I hope to review for this blog somewhere in the future. But there is more to look forward to! Here are some of my most anticipated mods of 2015.

The previous community efforts - such as DHWTC, DHW SDL Mapset, DHW SoD SDL - were all of high quality, and the variety of mappers involved (AlumiuN, Dean, Metalor, Ipank7000, Executor, Serpens, gerolf and others) will make this a no-brainer for any Wolf3D modding fan. The Lost Episodes are not regarded highly in the community, but the talent involved combined with coding features, such as the removal of object limits and changed floor/ceiling colors, has the potential to make for another great mapset. 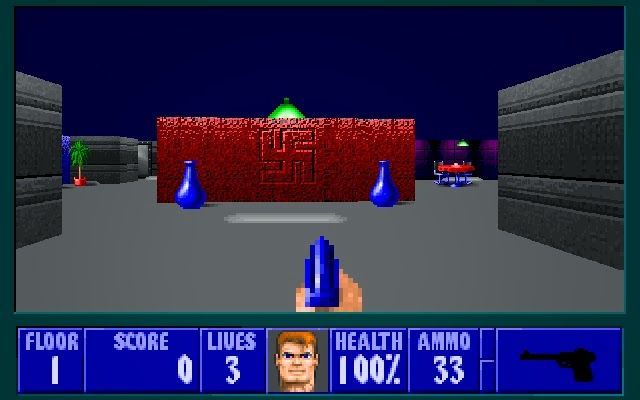 A total conversion using the ECWolf source port. Set in a fictional Central American country in the 1980s, Operation Serpent will feature seven enormours levels of 180x180 tiles (regular levels are 64x64), seven weapons, a huge cast of over 13 human and nonhuman enemies, environmental hazards, switch puzzles, and other features. The screenshots look fantastic, the maps look gigantic, the setting is original and the features could break some new ground. ThunderEnema's first release has you play as a vampire who works for a secret sector of the American government dedicated to paranormal research. Hijinks ensue when you are send on a mission. It will feature a variety of weapons, a diverse range of enemies, god/berserk mode, OGG music and sound effects, animated walls and a variety of other features. Also features artwork, some levels, sounds and concepts by gerolf. While Richter Belmont's projects have always been a bit hit-and-miss for me, the mapping talent involved in this project (WSJ, Serpens) might turn this one into his best release yet. And the screenshots look undeniably good.

Little is known about this mod, but the reason I add this one to my most anticipated list is the fact that it is being created by AlumiuN. AlumiuN is one of the best coders the community has, and he has been invaluable in keeping the Map of the Month competition alive and running. While it is unknown if this will even get a release in 2015, it is definitely a mod to keep on your radar. I expect this mod to break some new ground coding-wise.

Soldat_555's mods have gotten better and better with every release he has done so far, and the screenshots look very promising. While it is uncertain if this mod will get a release this year, it is definitely one to keep an eye on.