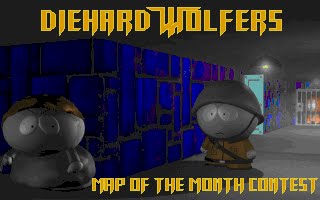 Initial impressions: The competition had obviously started to wain in interest by this time with this release taking several months to accumulate enough levels to form a decent enough release of levels. To bulk it out, mappers were also allowed to include 2 levels each for the first time. Ack and AlumiuN both submitted 2 levels and Ron and AReyeP again submitted outstanding levels, making them the only participants to include levels in all the month's releases of the competition. The release, I suspect, is the same exe used as the previous month as the same menu screens and statusbar and walls and sprites appear to have been used. Unfortunately the power bar seems to be at the same strength also that it was in the previous Month which I again found to not give the player enough stamina before reducing rather quickly.The special features have been particularly well used in these maps though.
The thing about these mapsets is that unless you know who made each level before hand, then you just don't know what type of map you are going to get to next as you work your way through them. This is one of the advantages and why I think the sets have proved to be so popular over the years for both mappers and players. 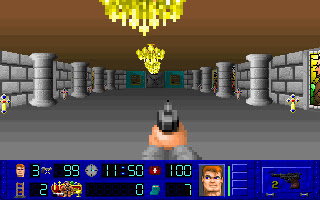 Gameplay: The gameplay is this is amongst the best in the monthly series. The 8 levels differ enormously in design and each are very entertaining and challenging to play. I particularly like the additional features, such as teleporters and directional glass, that were added to this set also. With so many features it has taken great work by the mappers to incorporate them into their maps and some real thought has occurred to try to use them to their their best.
There are very few Bosses used this time around which i feel is an improvement over some of the previous months releases where there were Bosses on almost every level and some with multiple.
I noticed that some other things had changed as well with health pick up levels having been adjusted to half strength. This I'm not sure is a great idea as you need to leave twice as much lying around to help replenish yourself. Plates of food in cold, stone, brick areas already look a little out of place, but where there's 10 filling a secret area?

Mapping: The mapping in this is actually a lot better then I remembered. I know that I've mentioned that the glam and interest seemed to be dropping of a little the longer this went on but the levels in this are really well done right across the board. I was ready to name one of the levels as the worst, like I did, but on reflection it would only have been because the level didn't utilise as many of the features as some of the others did and not because it was a bad level or not!
There a lot of tools here at the mappers disposal and they are used very well within the levels. I particularly enjoyed how Ack used the Switch operated walls with the teleporters and the glass that shows you what you had to do before you worked out how to do it. His level design in the 'Hola' map was extremely well done to showcase these tools to their best.
The levels are large and take a lot of time to work through, I was often over the 30 minute mark being a '100% of everything' type of guy (especially for these testing purposes) so finishing the levels can take a fair amount of time. I was quite impressed by how different Ack, who contributed 2 levels to the set, had made his levels. I think I would have struggled to pick that they were both from the same mapper if I hadn't already known who made which level. 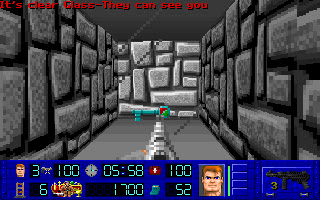 Likes: Although this turned out to be the last release in the series, the quality of mapping and the effort put in by the mappers was as good as in any other month. The features, while there are a lot, help make the levels so different and diverse that there is never any moments of deja vu or repetition.

Dislikes: So much effort has been put into the features of these sets, not to mention new status bars and even graphic signature banners for the winners, that I feel the menus could of done with a little work each time as well. Most months used the same blue start screen and South Park title screen. Even something as simple as adding the month that each of these were for to the title screen would of helped differentiate things a little bit. 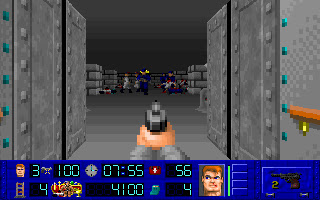 Wrap-up: This is actually one of the better sets amongst the bunch, not that there was really a poor set. Which such talented mappers as AReyeP, Ack, RonWolf and Arielus contributing on multiple occasions the levels in these are of great quality and very challenging to play. There have been a number of DieHard Wolfers Community sets released over the years and these are certainly amongst the best of them.
I feel there is definitely the opportunity to resurrect this type of Monthly contest again in the future and I hope to see not only these all get an SDL upgrade (Andy? :)), but perhaps even some resurrection of the Monthly competition (in SDL) to give the community more fantastic sets like these to contribute to and play.

Where Can I get it?: The Download for this month comes in 2 parts, to play you need both parts - Package: HERE & EXE: HERE.

You can read AReyeP's review of the levels HERE.

* There were 4 maps made for the next version of this competition that never eventuated. RonWolf has now made those 4 maps available for Download and are available HERE
The zip contains levels from the following mappers. (These are original levels that you will not find anywhere else in any other release!);
AlumiuN x2, AReyeP x1 & Ack x1

Disclaimer: All reviews are only my opinions formed when playing the mod and are not intended to discredit anyone or the hard work they have put into creating their mods.
Posted by Dean at 12:29 pm