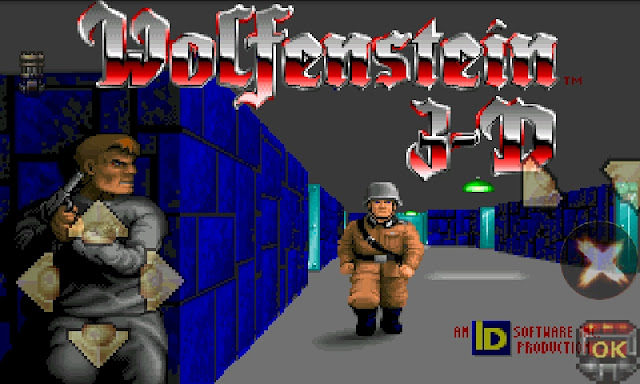 I recently downloaded, and paid the princely sum of $0.99c (Now $1.83 for some reason), for an 'unofficial' release of Wolfenstein 3d for the Android operating system. While the Ios (or Apple) version is the official ID release, unfortunately there hasn't been one ported across to Android yet, effectively cutting out about 1 billion users or so... This is released on Android by a company called 'Touch Fun' who also have released an unofficial port of 'Doom' as well as the ever popular 'Chinese Paladin' (?) and whatever the Hell this is;

The port looks fairly normal and actually behaves like normal Wolf 3d does, including having to wait a second of two at the initial start up screen for the available memory to self fill before being able to "press a key" as with the PC version. We then have the usual Wolf 3d music as well as the normal blue PG-13 screen. If untouched the screens will cycle through the credits, ID games screen and even the Demo's before stopping on the Options screen, at this stage all seems as normal. At this point it starts to dawn on the user as to how one is going to actually play the game. Upon the screen are the fairly obvious additional arrow type things used to play the game as there is no keyboard or mouse attached that is usually what PC players use to operate the game. The additional operating icons are used in the following way; 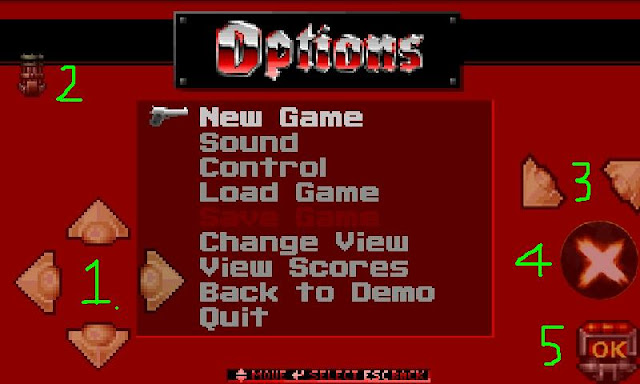 1. Directional Arrows
2. Select Weapon as well as keyboard option, to type in save names
3. Strafe Keys
4. Fire Button
5. OK Button (Same as Space or 'use' button on a keyboard)

One of the only main problems in being an unofficial port of the game is that there has been no change to the functional options from the original game, so you can actually go in and change the sound, mouse and even the keyboard options, without being able to use them! This just seems silly to have superfluous options that can't be used, but when your app isn't official and you are just trying to make a few bucks out of it then I guess you don't really care! 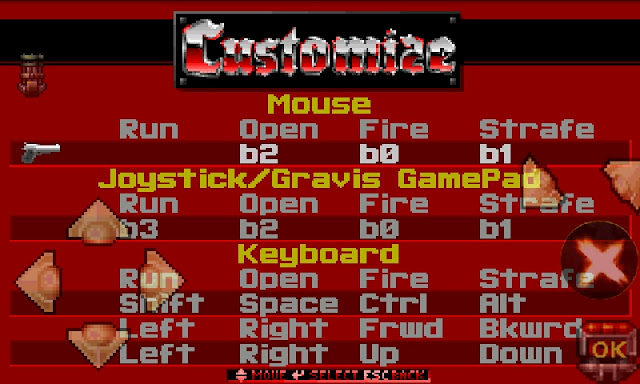 Personally I'm not sure how this type of obvious infringement on someone else's work can even be added to the Google Play shop as surely they are a breach of Copyright, especially being that the makers, the aforementioned 'Touch Free', who would already be raking in the big dollars from their 'Chinese Paladin' release... (lol), would in no way have the legal permission to release this or , as I suspect, be paying any royalty fees to ID games.

Once you start the game the mod looks normal, all the guards are in the right place and make the right noises, dogs bark and do their silly sideways running thing and all the secrets are where they should be. The onscreen buttons used to navigate yourself through the levels aren't overly smooth and do take some getting use to but the strafe keys do function quite nicely.
The change weapon icon brings up a series of numbers from 1-9 across the top of the screen when pressed, even though there are only 4 weapons, plus a little keyboard icon on the far right. Now I don't know if in some way you can actually plug a keyboard into your phone but in my opinion, that kind of defeats the purpose a little. What it can be used is for writing your name for your save games. There are are also, obviously no short keys, so saving and loading needs to always be done by returning back to the main menu. 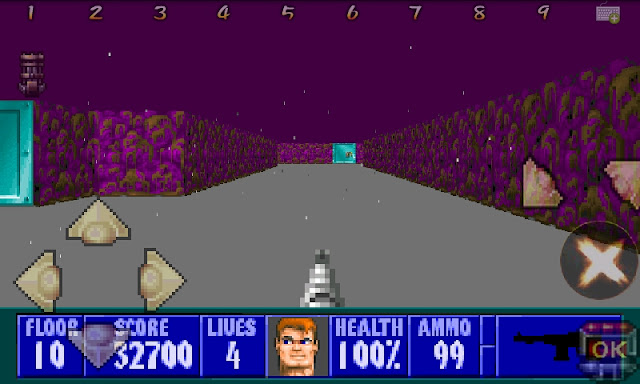 Things run as normal, that is until you get to the Episode 1, Level 10 secret level, where for some reason it's raining... Now while I have seen this used in Wolf 3d mods (in outdoor areas) I have no idea how this has appeared in a supposed full version of a port of the original game, unless they are of course getting around copyright somehow by not using an original Wolf 3d release, but some type of modified version (Which I still believe you can't charge for unless you change absolutely everything and created it yourself).

There ar 6 episodes each with 10 levels including a Boss level and a secret level and from playing through a fair bit of it I haven't noticed anything else glaringly different, although after the rain on E1L10 I wouldn't be shocked to find some more obvious inaccuracies.

This is, obviously, far from the proper version but as an Android user, the only option you have until ID decide to service the other half of the World who use Android phones and release their version. I can't say I'd really recommend this as the PC version is always going to be much better but as a novelty or a bit of fun to fill in some time occasionally while away from a PC and you just have that inkling to play Wolf 3d wherever you are, then it's at least better then nothing.
Posted by Dean at 12:04 pm