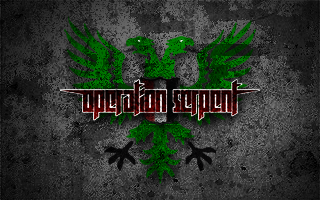 Initial impressions: You play as Maria Cortez, a Mexican-American spy who has been sent to the fictional country of San Salvacion in order to gather intelligence on rumored experiments, which are being performed by the fascist ruling party. When you start the game, it is immediately noticeable how crisp and colorful everything looks. It's fantastic, and really makes you want to explore the area. The size of the maps (4-6 times as big as a regular Wolf3D map) is astounding. Next to that, it sounds fantastic as well. There is a distinctive new soundtrack, and all the enemies have new sounds as well. It immediately sets itself apart from the original game. Atmosphere, setting, story, weaponry, enemies: from the start, the mod has its own identity. And that is definitely praiseworthy. 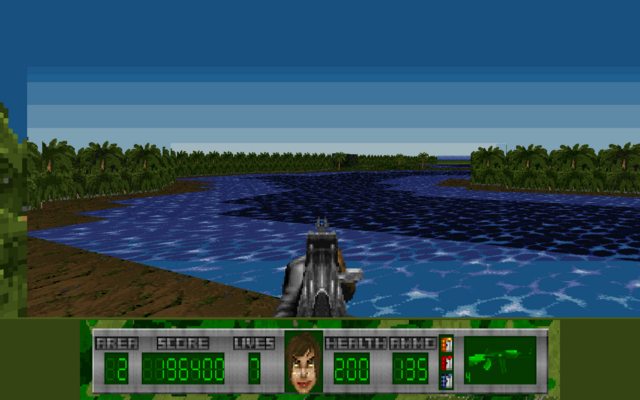 Gameplay: This mod plays like you'd expect an action-packed FPS to play, so there is no true learning curve for anyone who has played the original game and/or any FPS. It does stand out in terms of difficulty. While it is still doable, there are sections that are really tough and will require multiple tries. But overall, it doesn't exceed the difficulty norm for current Wolf3D mods. You will be tested, as it should be, but not frustratingly so. However, the increased map size can, on occasion, make the action feel a bit stagnated and dull. Luckily, in later levels, the enemy variety helps to counter this effect a little. Most levels require the occasional switch to be pulled, and there are traps as well to add a little variety.

Mapping: As was stated in the introduction, this mod features maps that are 4-6 times as big as the maps for the original Wolf3D were. The first impression wows, and you really want to explore these gigantic mapping canvasses. Unfortunately, however, the big map sizes aren't always a plus. It's like Hollywood sequels: they aim to go bigger, but that doesn't always make it better. That is the risk when you venture into areas previously unexplored by modders, and increased map size is just that. This and Gary Ragland's Leiche Soldat are the first mods to feature increased map sizes, and they both suffer from the same flaw: not all the maps remain engaging throughout. Some of the maps in this mod suffer from too much backtracking, disrupting the flow of the game. Next to that, these gigantic maps can also make you feel like the gameplay lacks some variety, as you go from fight to fight. You miss a sense of sequentiality, as if you just go from army of enemies to army of enemies. It ends up feeling a bit stagnant at times. This shows that the increased map sizes, while an interesting feature that definitely should be explored more, also need new features in order to keep the Wolf3D gameplay engaging for such a long time. While I'm singling out this big negative, I don't want to be too negative: overall I'd say that the mapping is quite good and never truly bad or anything. It just shows the pitfalls of these increased map sizes. 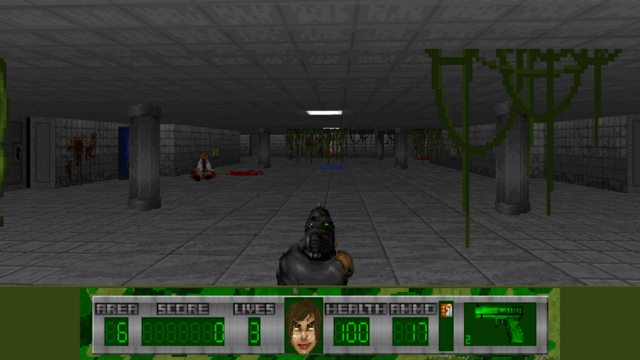 Likes: The variety in weapons and enemies is great. Level 4 introduces a new enemy, whose introduction is very memorable and scary. It's one of my favorite enemy introductions in recent years. Next to that, overall I'd say that this mod is a great showcase for ECWolf. It looks crisp and clean, sounds great.. a mod like this will definitely make Wolfers interested in using this as a base engine for their own mods. The difficulty of this mod is the right kind of challenging, and I think a lot of Wolfers are going to like how action-packed this mod is. The levels have a lot of variety in terms of settings, with levels taking place in the jungle, on the streets, in labs and in secret underground lairs. It is distinctively colorful in all these areas, which makes a game just that much more immersive and vibrant. It truly gives this mod its own distinct atmosphere. Finally, I think the secret level might be very cathartic for some, thanks to a recent hype. :)
Dislikes: The increased map sizes aren't always a plus, as was explained before. Some levels can feel stale because of this, and I can imagine that the 100%-ers are going to have a tough time achieving perfect stats. The engine could also use parallax skies; while the uses of blue and orange shaded colors works really well, I wasn't fond of the starry sky ceiling texture. It looked fake and kinda took me out of the game. The music was great for its genre, but on occasion it would be out of place. While a (trash) metal soundtrack works particularly well during action sequences, it really kills the immersion when you're just exploring a level that is calm. I would have preferred a musical score ala Doom (2016), where the music gets loud during action sequences, but is calm or non-existant during calm, explorative sections of the game. Finally, there are some small details that can become a bit annoying. For instance, when opening a door, the player cannot shoot enemies until a door is completely open, while the enemies can. This (unnecessarily) killed me a couple of times, and would become frustrating on occasion. I also had one problem with the enemy sounds, which overall were fantastic, but they were very insisting when they were alerted and looking for the player. The constant Spanish comments were so frequently played that they have the ability to drive you crazy. Less frequently employed comments by enemy guards would definitely be recommended for the next mod. 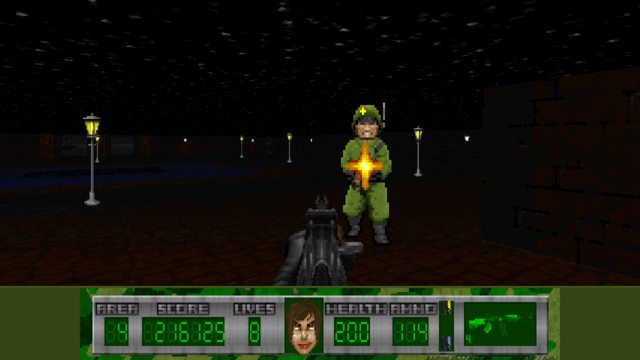 Ratings
Ron's Score: 8/10
Difficulty: Ranging from challenging to very difficult, but never frustrating
Best Levels: 1, 3, 4, 5
Worst Level: 7
Wrap-up: Operation Serpent is a great showcase for the ECWolf engine, and overall an enjoyable and challenging mod. It is occasionally bogged down by some small bugs, and the increased map size isn't always used to its full potential, but overall this is a mod that is well worth playing.

KumanoMTG did a 100% playthrough of the mod, which you can view right HERE.
Disclaimer: All reviews are only my opinion when playing the mod and are not intended to discredit anyone or the hard work they have put into creating their mod.
Posted by Ronwolf1705 at 1:43 am