Initial impressions: Very nice looking walls and guards, there appears to be real thought put into the layouts and placement of everything. The mod seems challenging and has a nice mix between internal and external areas. The sounds are nicely done although they do disappear a little sometimes. There is a very nice use of the night sky and weapon replacements look fantastic.

Gameplay: The gameplay is extremely well done and nicely paced. There are moments when the player really feels in danger and some where the place seems deserted. Most of the time it is advised to proceed carefully as one never knows what is waiting around the next corner. The mod flows along nicely and no two levels are similar enough for the player to get bored with. There are ample guards throughout which keeps the mod challenging and along with lots of special features, the mod really has a look and feel of it's own while still representing it's Wolf 3d roots well.

Mapping: The mapping is generally very well done with decent sized levels to search through and nice change ups in environments. The outside areas are nicely done and fit nicely in to the levels with many views inside and out from various points. The textured floors and ceiling graphics have been done extremely well and give each area a look of it's own. Unfortunately though it is possible to see grass or other floor colours between wall and ceiling and floor and ceiling in many places. This is a fairly simple thing to fix when mapping and would have made the maps look a lot neater for the player.

Likes: The atmosphere of the mod really stands out as a high point and makes the mod visually appealing to play. The artwork is extremely well done, especially the weapons, guards and walls. The mod moves along at a nice steady pace and the story progresses along as you play through. Special features are introduced gradually but I would have liked some of them to be used a bit more than just once or twice throughout the whole mod. Some things like the interactive chest and desks add a real interactivity to the game. Although impractical to the time of the mod, the teleporters are used better than in most other mods. The additional fifth weapon looks fantastic and is very powerful but really chews through the ammo quickly.

Dislikes: The Exe is quite buggy and there are a few errors with it that interrupts game play. The screen size repeatedly reduces in size by itself and the game, on occasion, crashes when using the F8/F9 quicksave/quickload keys. Some of the other Exe issues include inaccurate ammo counts, non functioning ammo walls and the switch activated columns often reset themselves. The Bosses are also way too easy to kill.
Another thing I wasn't a fan of was that the keys are rather blurry in design and can be very hard to see as they blend well with floors and walls, this can quite often mean missing them the first time through the room they are in. 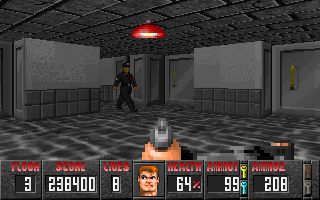 Ratings
Dean's Score: 8.0/10 (would have been higher if not for the coding issues)
Difficulty: More difficult that the original but careful players will do just fine.
Best Level: 9
Worst Level: None

Wrap-up: A really great, atmospheric mod that is fun and challenging to play throughout all it's levels. Based on the spear engine, there are some glaring coding issues but the mod is so well executed in most other areas that it still gives the player a very enjoyable experience. An SDL reboot would help fix most of the coding issues and well as give WLHack the wider attention this mod richly deserve.
This is highly recommended and is definitely one of the better mods of the past 5 years.

Where Can I get it?: You can download the mod HERE or by clicking on the screenshot at the top of this post.
The Demo can be downloaded HERE

Disclaimer: All reviews are only my opinion when playing the mod and are not intended to discredit anyone or the hard work they have put into creating their mod.
Posted by Dean at 10:52 am