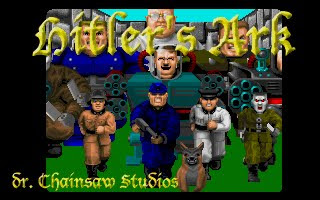 Initial impressions: Some really great coding makes for a beautiful looking and laid out mod. The fun factor in this adds to the gameplay but doesn't distract from the professional way the mod has been constructured. Fantastic new music and sounds and the animated guards after being shot are a fun addition. Combines elements of Wolfenstein 3d and Super Noah's Ark 3d together well.

Gameplay: The game play is quite decent with large levels to explore and a respectful amount of guards. This is a nice merging of Wolf 3d and Noah's Ark 3d and although the player plays as Hitler, the mod is a nice challenge with some comedic aspects added into it.
There is more then ample health and ammo placed in plain sight throughout the mod so that one never gets too close to running out of either. The new statusbar has been extremely well done and I believe this is the only Wolf 3d mod I've seen where you play as Hitler!

Mapping: The mapping has been done very well except for one main aspect, the key placement and their proximity to their respective locked doors. Quite often the player spends many minutes running from one side of the map to another to unlock a door for a newly found key, only to find another key which then requires one to run back through the whole map again to where the player once was to access another locked door. This is done repeatedly on most levels but worst on level 6 where the last 5 minutes of gameplay is criss-crossing the level unlocking doors, retrieving keys and then repeating through all keys.
The maps are large and very well designed although the player doesn't really feel like they are on a boat as there are plenty of stone walls and ceilings throughout. The mixup of the lab areas gives a nice changeup to the mod which is predominately of a brown and fawn colour.
There are quite a few secrets in the mod but unfortunately most are only 3x1 rooms containing treasure. This doesn't really encourage the player to search for all secrets on a level.

Likes: The beautiful looking environments are rich and show how nicely the mod has been coded and decorated. The animated guards after being shot are a great idea and the health and ammo replacements are nicely drawn and are a clever change up from the original versions.
The level design is nicely done for the most part and the Bosses health has been adequately increased to a realistic and more challenging level.

Dislikes: The level design in relation to to the keys and proximity to their doors is the major thing that I suspect would irritate most people. Just too much time is wasting running back and forth through already completed areas.
The size of the Chaingun replacement is just simply too large and blocks too much of the screen and the secret placements become quite predictable as you work through the mod. Secrets used differently than just small treasure deposits would have been better to encourage the player to keep looking for them.

Wrap-up: A very nice looking mod with some fun elements that is easy to play at only 9 levels. Some great work has been done to add some unique features and they work very well with the games environment.
Some concentration on improving some mapping techniques by the creator would make this a more enjoyable experience for the player but outside of that, this is still an enjoyable, fun and easy mod to play through.

Disclaimer: All reviews are only my opinion when playing the mod and are not intended to discredit anyone or the hard work they have put into creating their mod.
Posted by Dean at 2:43 pm