Introduction: The "Level Analysis" is a new type of post I'm introducing to this blog. In these posts, I will be picking a single level from a Wolfenstein 3D or SoD based game (it could be either one of the commercial games or an addon/mod) that, generally, will be a map I thought stood out for one reason or another. The post title will always contain the map that's the subject of the post. In the post I will discuss my thoughts on that particular map, including many of its features and/or overall styles and usually, reasons why it stands out from the crowd in some way to me. Each post will contain at least one in game screenshot from the level. Additionally, at the bottom of each such post, a Mapedit view of that level's map, if available, will be shown, with a line drawing the quickest path to the level's exit. The map may also contain highlighted areas that will be discussed in the post. Without further explanation, I will start my first post of this kind, and it is for the original E4L5 which, per my first post (Introduction to Me: WolfForever) is the single level from the original Wolf3D (excluding the obvious ones like E1L1, boss levels, and secret levels) that stood out most in my mind the first time I played the game.

The first four maps of the fourth episode (A Dark Secret) may look large at times in an editor, but the reality is that they are all fairly easy and short to complete. A good run of each level could come in at under a minute, easily under a minute and a half, a piece. The mapspace is filled with unnecessary to visit areas, with a rather quick route to the exit. However, E4L5 breaks this trend in dramatic fashion, and not only takes much longer to complete than any previous level in the episode, but is arguably one of the, if not the, most extensive level(s) in the commercial Wolfenstein 3D game to that point. By looking at the shortest route line on the map, certain rooms can be skipped, but nearly every general "area" of this relatively large level must be visited.

Additionally, there are relatively few supplies yet many guards of all kinds present along this shortest route, so unless you're a really good player, or playing on an easy skill, it may be nearly mandatory to visit some of the additional areas that are host to much of the level's ammo and (already limited) health supply. Even more confusing, fully half of this level is done in quite a mazey layout, and it can be easy to get lost or miss an area. This is compounded by the fact that one of the keys required to beat this map is located in a section of this maze area that is not necessary to visit just to progress into the more open grey stone section - and you don't need either key until the last few rooms of the level. In fact, while both sets of locked doors are very close to each other on the map, it is not hard at all to reach the first locked door with no key yet at all. This is because, while the first (silver) key is in an area off the main route out of the brown mazey area, the second - gold - key is even easier to miss. 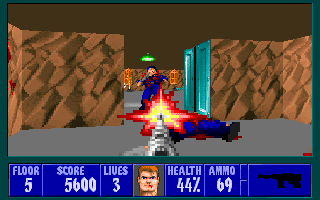 Circled in blue on the map is the section of the level containing the gold key. Notice the player cannot enter this section from the left, because a green barrel blocks the path. ID Software did something they only very rarely did in the original Wolfenstein 3D game - make a relatively unobvious secret, actually a succession of two secrets, necessary to obtain this essential key. Both pushwalls in the blue circled area must be used to attain this gold key.

As eluded to earlier, in addition to having many ways of challenging the player through confusion (a key far, far away from it's door; fully half or more of the level being quite mazey; and most of all, a rare case of needing an inobvious secret to get a required key), this level is no walk in the park as far as enemies are concerned either. Like I said, there is little health or ammo laid out on the shortest route, and (especially regarding health) it is not exactly plentiful in other areas either. All types of normal guards appear - starting with several dogs, then transitioning to a mix of guards, officers, and SS. The silver key in particular is guarded by a large hoard of SS.

Additionally, this level has one more way of tricking you - there are many fake elevators. In particular, it will look as if you've found the exit almost immediately once you enter the grey stone area, as there are two elevators in this room (circled in green on the map), but neither can actually be entered as blocking barrels immediately follow the elevator doors. The room with the actual exit also has three elevator doors, but only one of them is real - there is another elevator blocked by barrels opposite it, but most notably, a large "trap room" - circled in purple in the map - is located behind a third elevator door. But it is not necessarily a room that need be avoided, because at its far end (to the player) is a secret than contains an ammo clips and no less than THREE one-ups as a prize for fighting off this room of officers.

To me, E4L5 is the first truely tough level in the Nocturnal Missions, and a prelude to some of the more difficulty levels to come even later in Wolfenstein (especially Episode 6: Confrontation). Even when I replayed Wolfenstein for the second time in 2000 (reference my first post for details on my full Wolf3D career), it took me nearly an hour to find the hidden gold key - I had remembered that this level gave me huge troubled when I was younger, but I didn't remember why, and I didn't remember the ultimate solution. But even though many may object to the inclusion of a hidden required key, it is for these reasons that E4L5 is one of the more memorable, more notable levels in the original Wolfenstein, and the feature of hiding a required key undoubtedly contributes to why this is the level I remembered most from when I was young, even against the many large, mazey, and difficulty levels later in the game - especially in the final episode. 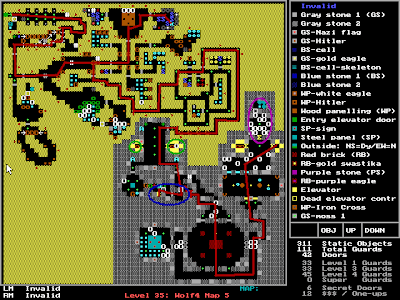 Posted by WolfForever at 8:00 pm