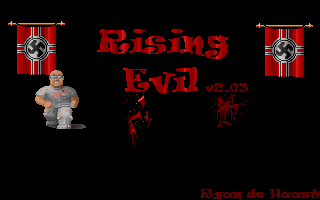 Gameplay/difficulty balance/enjoyability: This addon is not necessarily the most balanced out there, as it contains an excess of ammo on all skills in some cases, and is quite easy even on normal because of too many guards being level 4 only. So playing this on hard skill is recommended if you're looking for a good challenge. That said, while this basically restricts the mod to one skill in my view, it is quite a fun romp on that skill with some good challenges. You're fighting original Wolfenstein 3D guards most of the time, but on hard they are fairly well placed. The mutant is changed into a demon-like enemy; however its attack is generally similar. Additionally, there are six bosses and they contain changed sprites. The bosses appear on every level that is one less than a multiple of five, except the final boss which is on the last level, Floor 30, as would be expected (Floor 29 does not contain a boss). Most of them are not overly hard although in at least one case (Floor 9) it is near impossible to have enough ammo to defeat the boss unless you find a few secrets. As stated before, ammo is sometimes in excess, but health is not overly plentiful so this makes some challenges but little frustration. The maps themselves are mostly quite long with an ability to hold up to six keys, but they did not bore me, as I recall really running through half of this on a single Sunday afternoon. The only level I really did not like that much is one map, Floor 21 if I recall correctly (certainly around there) that is almost entirely a series of alcoves with enemies in each one. This is okay when used in a level (i.e. original Wolf3D E6L1), but I did not appreciate it being practically the entire map. Otherwise the designs and balance tend to create an enjoyable game throughout, providing you use the highest difficulty. My rate for this category is 8/10.

Level design/texturing/look: There is a predominant tendancy for brown walls (generally wood or chipped wood) throughout much of this game, although it starts with a few green slime/grey stone dominated levels and there are some brighter lab-like maps near the end. Additionally, the level following every boss level uses an underground/tunnel like wall with wood on its borders but grey in the middle, that is not used on any other maps. However, in spite of a slightly limited texture variation, the used textures are put to good use and come with fitting ceiling colors. There are many new and changed walls ranging from slightly modified original Wolf3D walls, to some imported from Spear, to several new wall textures. Door textures are also changed, with multiple types, including a cool wooden door to mark the entry into a wooden area, and a couple new locked doors. Many of the things/objects are from the original game, but there are some new ones and the 25 ammo kit is imported from Spear of Destiny. For design, as stated before the levels are mostly large, and many are cavernous. However there is enough variety and with the exception of the alcove-only level (mentioned in the above section) I felt they were pretty well designed and managed not to get overly repetitious even with many similarly themed maps. Level progression is good, with some backtracking at times, but that is to be expected especially given the addition of four new keys, and I can't ever remember having no idea where I needed to go next. I give this category a(n) 8/10.

Code changes: In addition to the six keys mentioned above, there are many other changed like new intro/intermission (including par times)/ending screens and several new demos. Ceiling colors are changed and fit the levels well. There is one new weapon - a missile launcher - that is relatively rare (from memory) but obviously useful if you find it. The 30 levels are also seamless, and are not split into episodes. The episode selection screen is removed and the names of the difficulty settings are changed as well. All in all these coding features are certainly seen in other mods as well, but everything pretty much gets the job done. (Note: I'm now only assigning by-category ratings to the first two categories.)

Other (music, miscellaneous features, etc.): The mod loses a little in this field; a good part of this is because all the music is unchanged making some levels have inappropriate music (most notably Floors 4, 14, 24, and 30 are boss floors without boss music, and Floor 29 has the final boss music but it's actually the penultimate level with no boss!). Many of the tunes are also repeated just like they are in the episodes of the original Wolfenstein 3D, since the game is Wolf3D based and the tunes in each episode of the original Wolf3D repeated. Also, there are no secret levels. Really I don't recall any extras or easter eggs here at all, but the unchanged music and no secret levels are my only real complaints. 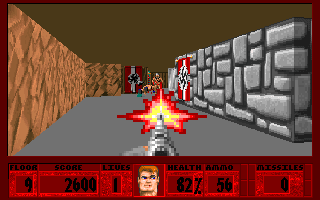 Summary: Rising Evil is quite a fun partial conversion with good, generally extensive levels (minus than one with all the alcoves), generally unadvanced yet sufficient code changes, a nice mostly brown look but with occasionaly variations mainly near the beginning and end, and a challenging but not frustrating play on the hardest difficulty level. However, less of the guards should have been level 4 only, as this makes things quite easy even on middle difficulty. Additionally, I took off at least a point for the completely unchanged music and lack of any secret levels. However overall this is quite a good mod that deserves your attention and a playthrough; I strongly doubt you'll regret it. Just make sure to use the hard difficulty level if you want any considerable challenge.
Posted by WolfForever at 11:10 pm