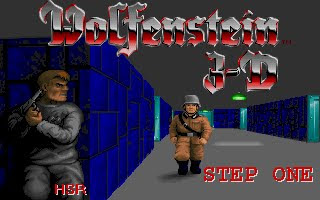 Initial impressions: The game has been made in an old school style more resembling the original game rather then with all the special features of more modern day mods. This has been made with only changing the floor and ceiling colours and wall and sprite set but still gives it a look of it's own.
The guards are many and it's well worth looking for secrets asa they are often well stacked with health, ammo and weapons. You'll find you may need to run back to stock up at certain times through each level and probably won't have a lot left over.

Gameplay: The game play is quite difficult as large amounts of guards have been used here and they all seem to do plenty of damage when they shoot you. Each scenario is packed with enemies and the 'stand and face' method is less likely to garner a great result with this type of gameplay.
This would be found VERY challenging for a novice player and should challenge more experienced players look for a harder, older style set to play.

Mapping: The mapping is in an older style and uses some of the tricks popular back in the earlier Wolf modding days. There is an large number of secrets used (especially on level 2), but most rooms are used in a linear fashion and following through each level isn't overly difficult as long as you look for secrets as you need to find some to be able to complete most levels. Outside of the secret level there aren't many big open areas but are more room after room as you work your way through the maps.

Likes: The black walls. usually I don't like them unless you are meant to be playing through a complete night time level, but in this they have actually been used fairly well here and with great effect.
The mod is certainly challenging, which is a nice change from a lot of mods where once you get the biggest weapon you basically never die, this actually kicked my ass repeatedly and made my play more warily then I usually have to, going in 'all guns blazing' will not suit you well in this mod!

Dislikes: The guards all seem to do such massive damage every time you get shot, I'm certain this has been increased from the levels in the original game. You preety much have to seek out health, which there isn't much of out in the open, after 1 or 2 shots or you'll stand a high chance of dying the next time you get shot.
The walls have an old school look but some just don't fit in that well and just look like badly distorted wall art that have have tried to be converted into 64x64, quite unsuccessfully.
Having to find secret rooms to finish a level is something I don't like very much as this style doesn't cater to all players, some just like to run through levels sa fast as they can without having to worry about searching every bit of wall space to find a secret that might lead to the exit. I'm also not very fond of the 'hollow wall' trick but they are a trait of harry's mods and he uses them fairly well again here.

Wrap-up: The is a decent effort, although a little short at only 4 levels, but is fully in HMS's style and will delight those that loved his earlier mods. This is quite a difficult mod in parts and should choose to be a decent challenge for most players.

The sequel to this mod, titled Step Two, will be reviewed in the next couple of weeks.

Disclaimer: All reviews are only my opinion when playing the mod and are not intended to discredit anyone or the hard work they have put into creating their mod.
Posted by Dean at 9:51 am