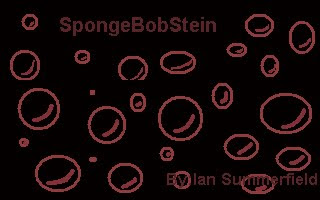 Initial impressions: Visually the mod looks great as the 64x64 sprite versions of the popular Tv show have been draw nicely in a comicly and cartoonish way. The opening level is rather small (as are a lot of the levels) but it's suitable enough to introduce us to the characters and gives the player a chance, including those that aren't too familiar with the show or characters, a good opportunity to work out what each sprite represents.
The sounds are great, including many soundbytes from the TV series but unfortunately the music has been left with the original Wolf 3d music which seems really out of place. 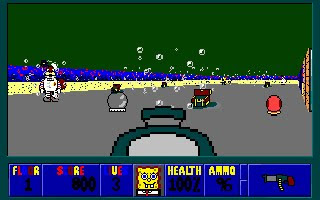 Gameplay: The mod is well decorated and the mapping at a decent enough level but nothing is too confusing. With the levels being not overly large there's little chance of getting lost, and with the secret walls all being marked, this is a fun but fairly simple play through.
There's definitely a novelty factor and this needs to be kept in mind when playing as this is intended to be a fun set. Comparing it to more serious Wolf 3d mods, it may not stand up too well, but knowing the creators intentions and appreciating the hand drawn walls and sprites helps make this more enjoyable than a straight forward reproduction of the original game.

Mapping: The maps are fairly small, nicely detailed and rather bright (as seen below). All walls and sprites have been replaced and the subject matter helps make this quite family friendly also.
The maps are fairly small on most levels but the sprites have been used well to help make the navigation of each level a little more difficult that it first appears.
There has been ample use of health, ammo and treasure where the player shouldn't find themselves short at many times when playing. The secret walls have all been marked and for some reason, in this type of 'fun' set, I find this quite suitable and rather appealing.
I genuinely feel that the creator has made a nice balance between level size and the fun factor of the mod as the theme may potentially become a little boring after a while, especially if each level was to take a lot longer to finish.
The Boss levels are significatnly harder than other levels, but this gives the player a nice wake up from the fun anf frovility of the other levels. 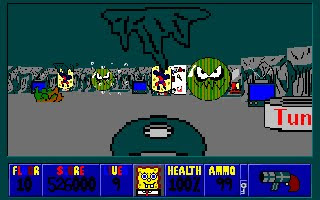 Likes: The bright colours and sounds are a great feature of the mod, although the reptitive sound snippets can start to become a little grating if you play for too long in each sitting.
The fun factor is the enjoyable part of this that I like the most. Not being a huge fan of the Tv show, but knowing enough about the characters, this is a nice break from the standard Nazi theme seen in most Wolf 3d mods.

Dislikes: The music - so much effort has been put into new sprites, walls and sounds, to have just left the music the way it is, is really disappointing. Even if the creator had added more appropriate 'cartoonish' sounding music not connected with the Tv show it would have been more fitting than the Wolf 3d music, in my opinion. Of course music from the Tv show would have fit even better.
The sounds, while great, don't have a big variance and can become fairly repetitive after a while.

Wrap-up: For a mod that is obviously made to be a fun set, I feel it achieves it's objective quite well. This type of mod can't be taken too seriously but it's still easy to see, and appreciate, the hard work done by the creator.
If you are looking for something a little different and light to play to fill in a spare 30 minutes or so, then you could do a lot worse than to give this a go.

I managed to find the 5 Level Demo also, which can be downloaded HERE.

Disclaimer: All reviews are only my opinion when playing the mod and are not intended to discredit anyone or the hard work they have put into creating their mod.
Posted by Dean at 6:02 pm