Since the DieHard Wolfers started in March 2003, Community Members have been able to vote, either 'Hot' or 'Not', weekly, on any mod they choose in the list. While being able to vote weekly means that the list is open to some manipulation, which has seen some less than stellar modes reach as high as the top 20, generally the Top 10 spots have been held consistently by the better mods released. The way the results are calculated is based on not the mod with the most votes but the mod with the biggest number of votes dividing the 'Hot' and 'Not' sections. IE - A mod with 100 Hots & 70 Nots (30 difference) will rank second behind a mod with 90 Hots and 50 Nots (40 difference) due to the number between the Hot & Not totals.

Whilst looking for mods to review I often look through this list for something to play that might interest myself and the blogs readers. I recall that I was speaking to Majik Monkee a little while back and he came up with the idea of reviewing some of the lesser favorites that sit towards the bottom of the list to see if they really are as poor as the voting may suggest. As Majik isn't around much these days, I thought I'd take up the challenge and will endeavour to, not only, bring some light to some of these mods, but also search for that proverbial 'diamond in the rough' that might be hidden amongst a bad bunch. I'm not going to do a full playthrough and analysis about everything about each mod i review but I will attempt to provide some screenshots and a decent enough idea of whats in the game for people to decide on their own whether this is something they might be interested in playing some day, or most likely, not. :)

To kick things off though, I thought I'd both review a mod from near the bottom of the list as well as list the Top 10 (As at 18/07/2012), along with links for downloads (and to any reviews I've done of them - I do intend to review all of these in time). Just click on the title of the one you want to download!

You can visit the DHW Charts yourself HERE. (Note: You do need to be a forum member to vote though!) 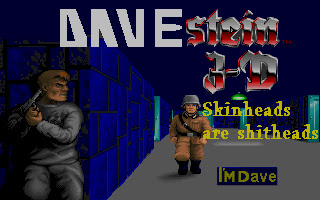 Creator: David Wettlaufer
Hot: 0
Not: 34
Review: Davestien 2 is 2 levels in length and contains very little new or anything exciting to have anyone to desire playing it ever, unless you are playing it only because of it's pure awfulness, like me. The original Davestein was released a mere 3 days prior to this, so it's fairly easy to work out how much time might have been spent on this! Davestein 2 has 1 new wall, a psychedelic style purple mess that becomes pretty boring very quickly, plus some nicely drawn (albeit stolen) guard replacements and changes to the face on the status bar (I think it might even be Dave himself!), in fact watching Dave slowly become more injured with the more damage you take almost makes you not want to heal yourself!

There are also rather poor newly drawn weapons but it seems that most time has been spent, in the creation of the game, with Dave scouring the Internet for the most annoying sound snippets one could ever imagine to replace certain sounds within the game. Dave has thought that it might be clever to replace the door opening sounds with a loud booming voice that states "Door opening!" and when it closes "Door Closing!", funny, for about the first 10 times you open a door until you come to a sequence of doors, and then it becomes very annoying, VERY quickly. Other intended 'clever' sounds include 'Bang Bang' as the guards shoot at you and the sound of someone coughing - which could never be annoying (insert sarcasm here!). 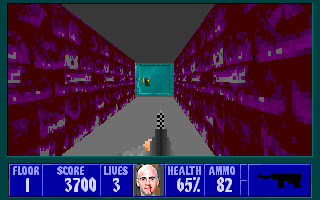 The 2 levels are small and very poorly made and would have taken no more than 30 minutes to make, in fact the new title screen would have taken longer to make! Level 1 contains a mere 21 guards, with 14 of them being the dog replacement and the enemy being held within an inaccessible area meaning that the player can stand is full safety and pick them off while they can do no harm to you. Level 2 contains 3 Bosses and takes up the entire map, although there are only a few rooms in a central area then a massive open area with disappearing sprites because the mapper had no idea (or care) that you can't do this in early Dos versions of Wolf 3d! Very little thought has gone into the mod and it's even a little hard to understand how the creator could have finished this and thought 'Wow, the community is going to love playing this!' Nope, Dave they don't, in fact you mod has never, ever received a single positive vote and it's pretty clear to see why, making Davestein 2  nearly the worst rated mod of all time! Whats worse is that this was only released in 2004, not like 1995 when most people didn't know what they were doing, in fact WSJ released his amazing 'Coming of the Storm' in the same week, hmmm, I know which one I'd play again!

Download Davestein 2: Skinheads are Shitheads HERE, if you really must...

Disclaimer: All reviews are only my opinion when playing the mod and are not intended to discredit anyone or the hard work they have put into creating their mod. Ranking correct at time of review.
Posted by Dean at 10:26 am