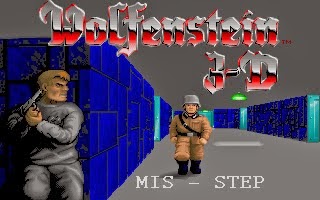 Initial impressions: From first impressions this is obviously an old school mod and boy does it show it's age. I've always been a big exponent for honouring the older style mapsets and mods but upon playing this one I've been forced to rethink a little. Wolfenstein 3D is 22 years old now, older than some members of the Wolf 3d Community, obviously things change and expand and improve over time. So how do I rate and review this mod? On it's merits against other mods produced in the 1990's or against today's standards, which hardly seems fair. The only conclusion I can come up with is to hope that my experience of playing and reviewing mods from all era's will allow me to decide whether this is a good mod or not, and, for mods of it's age, how does it compare? The Answer to both is, not very well... 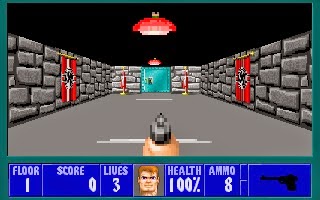 Gameplay: The maps and gameplay is extremely simple. The maps are very small, the number of guards is very few and there is little to no decoration used and little to no wall variance used. There is no more than 10 rooms in any of the 4 very small maps. Each map uses only 1 or 2 wall types in each level so to compensate the maker has overloaded on Bosses... sigh. From my experience this is a common style from early mapsets and one that, thankfully, doesn't get much recognition or respect today. The Bosses aren't overly difficult but if you want any health or keys at all, you are going to have to either kill a boss or search for secrets as there is pretty much none anywhere. Oddly enough though, there is way more ammo than you'll ever need because each enemy drops a 25 ammo box! Why? I don't know, stupid question with no realistic answer really.
On Level 1 you are supposed to kill a Boss to get his key to continue but if you just go to the room to where the gold key door is and start shooting it usually opens for you and you can continue and finish the level without having to kill the Boss.

Mapping: Extremely basic. I know there have been a lot of advances in Wolf and today's mappers can do so much more but even in older sets the mapping could, should and was, much better than this. I've played other Harry Mass Snr. mods, and while they are somewhat basic, they certainly had more to them that this did. I'm not sure if this is his first or last or whatever but there's seriously no more than a couple of hours of mapping combined here.
The maps consist of very basic squarish maps, most rooms have little to no decoration, in fact the one's that do have decoration in them generally don't have many, or any, guards in them for some reason. All health and keys are hidden but treasures and ammo are oddly left out in the wide open.
One of the other factors I didn't like was the use of some of the old school 'tricks' and that is hollow-walls. I personally just never saw the appeal and upon playing this I'm still bereft of an understanding why they held some popularity.
One of the maps is no bigger than 15x25 yet it contains 3 Bosses, why? Who knows, for some reason mappers thought this was a good way to map back in the day... 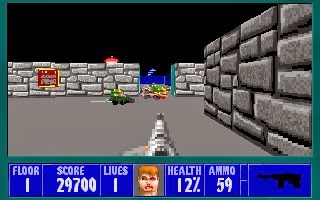 Likes: There has been some slight changes to the mod at least. Changed ceiling colours, a marginally edited title screen and the ammo volume and sprite has been changed. Some credit is due for modifying as it was a pretty scary thing way back when and not often done.

Dislikes: There's plenty to dislike in this one. The maps are small and not challenging. There is little to no decoration, way too many bosses, you have to search for hidden keys to move on sometimes and there's just no real effort to produce anything beyond a very basic level in this mod.
The exit elevators aren't even a room, they are just a wall switch behind the elevator door, this look and seem rather silly and thankfully I've never seen them in any other mod. 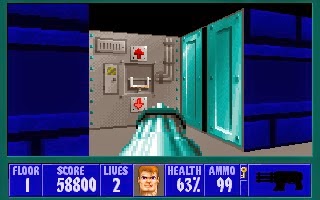 Wrap-up: Not just a badly out dated mod, a mod, that I believe, would of been very bad in it's day also. There's very little appeal here to play this, in fact I'd suggest you'd pretty much have to be a hardcore Harry Mass Snr. fan to play this, only ever once.

Disclaimer: All reviews are only my opinion when playing the mod and are not intended to discredit anyone or the hard work they have put into creating their mod.
Posted by Dean at 11:22 am