Warning! The following article is part of a series of reviews meant to accompany my Youtube playthroughs of various Wolfenstein 3D mods which could not be found on Youtube prior to my effort. This particular review covers The Ravenous by RGamesINC. Please note that I often take a closer look at some aspects of the mod, trying to determine why has it escaped the attention of the Youtube community. I do my best to conceal or obfuscate as many details as possible, but some spoilers are unavoidable. If you dislike spoilers, please read carefully.

The relevant Youtube playthrough (done by yours truly) is here:
https://www.youtube.com/playlist?list=PLWf2clpxutyCQMNt1zDQvUA45aUXBvbGH 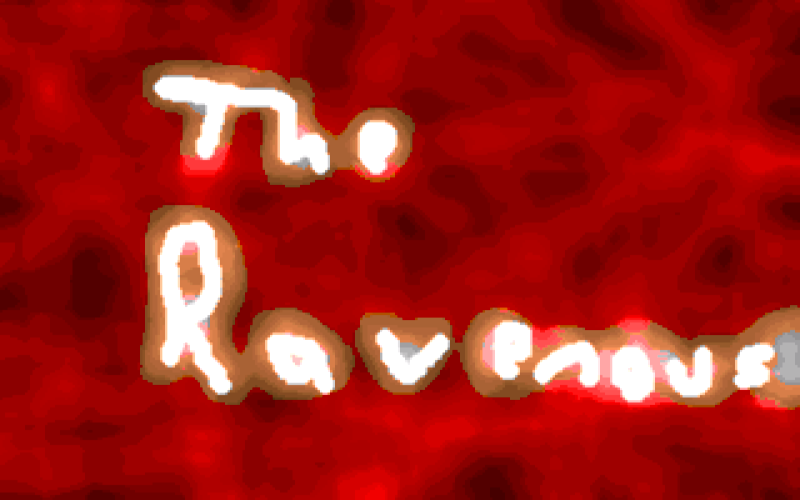 What is this?
Released in May of 2006, The Ravenous is a Wolfenstein 3D total conversion done by RGamesINC (judging by the readme, the main driving force behind said alias is Rocketboy680, definitely a familiar nickname). Sporting numerous (most likely original) graphics and sound replacements, as well as some small coding changes, the mod attempts to create a Doom-like scenario of a military base being invaded and corrupted by hellish alien beings. Attempts and sadly fails. We shall see why in a while. 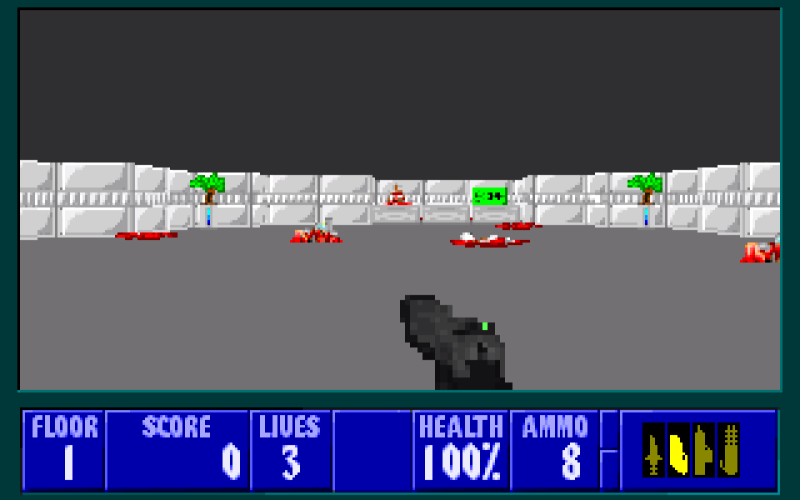 Why should it be on Youtube? (aka The Good)
So what's the mod's main selling point? The answer is obvious: the graphics. The Ravenous has got quite a few original graphical assets which are by far the mod's brightest side. Not everything has been replaced, but what's there is done quite well, with obvious care, love and passion. While not professional grade, the new artwork is quite nice for an amateur mod. Guard sprites are done especially well, all of them, be it the twisted, gory mutants, or the actual aliens. Most of the gore and alien decorative sprites are quite impressive as well, and the author obviously has a knack for this kind of dark artwork.

There are new sounds, too, mostly limited to various tortured screams the enemies make when they see you. They are quite good, especially the Baetal's activation and death sounds are quite startling, and generally speaking, the enacting person definitely did their best to produce some convincing, horrid screams of torture and anguish. The Guardian's death effect, resembling a scrambled radio transmission, is well done too, and makes you stop and think about the actual nature of the aliens for a while.

Early on, the game's intended theme is actually executed fairly well in terms of mood and decoration. The corrupted, alien areas of the base look good, and especially the entrance to Level 2 stands out in this regard. It is only later on when things go from OK to bad, and from bad to worse, as I shall explain below. 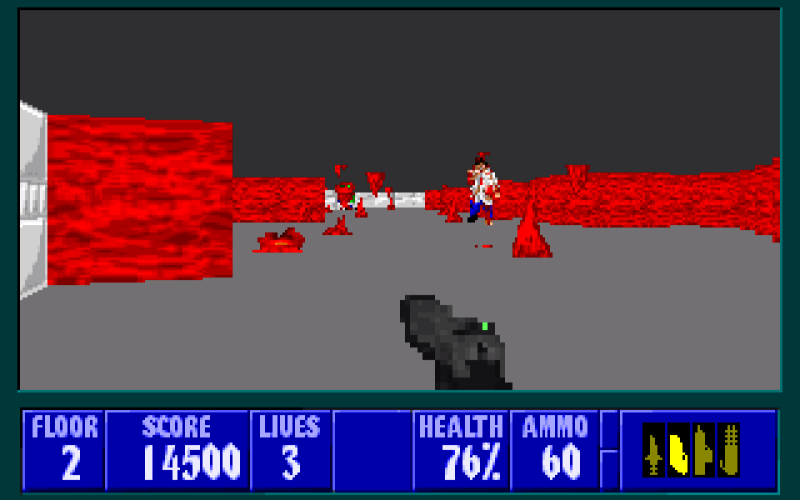 And why it wasn't there before? (aka The Bad)
On the surface, this mod has everything it needs in order to be an enjoyable experience. The new storyline, coupled with rather ambitious visual changes, reshape the game's environment dramatically and are a welcome novelty after all the WWII-themed mods. The Ravenous makes a good first impression, everything seems to be nicely done and the player is curious about what's coming up. There is potential, but potential still needs to be fulfilled through maps. Therein lies the downfall of The Ravenous. The maps are by far the lowest point of the mod. The quality of levels never really surpasses a certain upper threshold; they are decent but simplistic at best. And over time, they take several plunges deep down the pits.

The initial impression is good because there's nothing strictly wrong with the first few maps. However, one will quickly notice that they're way too simplistic in design, largely consisting of several separate rooms conjoined by long hallways. Levels are cleared room by room, the opposition is negligible, and so a player hoping for difficult gameplay will be sorely disappointed. Right before the midway point, the mod reaches its peak in mapping creativity. Level 4 has some interesting areas, then on Level 5 we encounter our first challenge - a boss - in a well done shooting range. And then everything goes to hell. To wit, major parts of Levels 5 and 7 are consumed by completely featureless, mandatory mazes. You cannot even finish Level 5 legitimately, since one of the keys is missing. Finally, the climactic Levels 8 and 9 are nothing but one single, twisty passage filled with enemies.

Next up are balance problems, which become apparent as soon as Level 4, even before the mapper's creative crisis strikes. The author uses Baetals (sprite replacements of Hitler Ghosts) liberally, but does not provide enough ammo to kill them all comfortably, or even at all. The player is either forced to skip some optional bullet sponges, or use the knife heavily if they want 100% kills. Waste too much ammo early on, and you might well find yourself in an impossible spot in the second half of the game, particularly if you cheat your way into Level 6, which is a massive, completely unbalanced difficulty spike. You will encounter 20 Enforcers (SS) in one room, at which point you might already be out of ammo if you went the wrong way and killed some optional Bateals. After a very easy Level 7, Level 8 raises the bar again with numerous Ravangers (mutants) who start roaming the level as soon as you fire a shot. Level 9, on the other hand, is completely trivial, as every enemy is either easily dispatched, or uses easily avoided attacks. Difficulty curve? It's a sine wave! Many late levels also feature a striking lack of health items (sometimes nothing at all!) to go with your ammo woes.

While nine levels is the perfect amount for the graphics assets available, the actual management of said resources is sorely lacking. Early on, you will find yourself exploring the exact same looking environments all over again, with a bit of alien imagery thrown in here and there. Later levels bring more variety in terms of textures, but there are way too many instances of textures or sprites being only used in one place on one level, and then never seen again. And perhaps most significantly, the whole alien nest theme has been handled poorly. The alien areas that make up the majority of Levels 5-9 consist of nothing but featureless passages full of the same red wall texture. The game is about aliens and has numerous alien and gore sprites, so their absence in Levels 5-9 (except Level 6, which is pretty well done in this regard) is particularly striking. Why not use them where they're supposed to be the main stars of the show? Why waste the strongest point of your mod?

And while I have already made the point that the audiovisuals and overall mood are the mod's greatest advantage, they are sadly flawed as well. The new textures, while no doubt done with care, are too monotonous, usually featuring nothing but red or grey. The guards do not have directional sprites and only ever face the player, which is a step back from vanilla Wolfenstein and makes the player's life a bit harder. There is no new music, and the original pieces are often completely inappropriate (this is most evident on Level 9). Baetals cannot open doors, so you can just trap them inside rooms (a good way of saving ammo) and they're too stupid to ever come out, completely ruining the suspension of disbelief. Finally, at certain points I was no longer sure if The Ravenous even wants to be taken seriously. Check out Level 4 for some good examples. All those things wreak havoc with the mod's atmosphere. 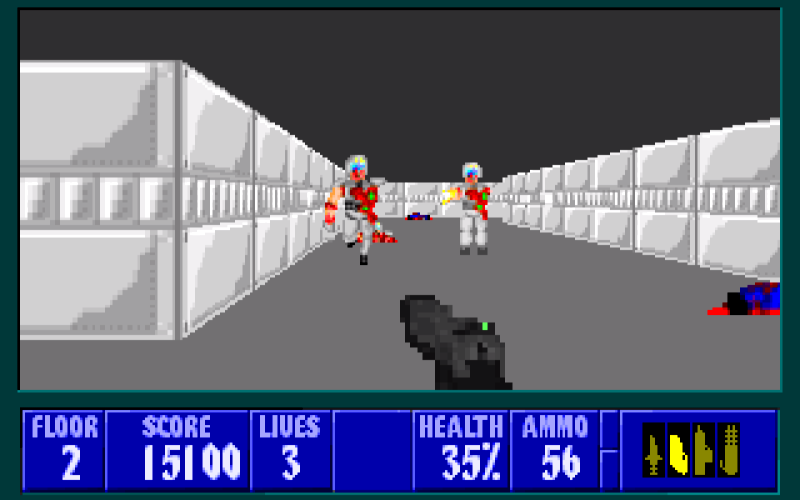 Bottom Line (aka Bottom Line)
Sigh. As you can see, the potential is there, all the resources necessary to create a short but impressive and enjoyable experience are present, but The Ravenous sadly fails to fulfill the initial expectations, primarily because of lackluster mapping. Maps are the most important part of a Wolfenstein mod and can make or break any game based on the Wolfenstein engine. Because of that, I cannot say (with a clear conscience) that The Ravenous is a good mod. By all means, download and play it to see the new graphics, but playing all the way to the end is probably not worth it.

Hidden Stuff (aka Beware of Spoilers)
Well, technically the entire second half of the game should count as hidden because of that missing key, but let's look for actual secrets (and by the way, there are no secret pushwalls in the game at all, nor treasure). First of all, if you start any episode other than 1, you'll end up on a placeholder map, which consists of several interconnected red tunnels full of alien and gore sprites, but no enemies or exit. Ironically, it looks much better than the actual Levels 8 and 9. Furthermore, there are three hidden levels found on later map slots. They seem to be very incomplete and don't make much sense in terms of design, but they also host textures which I don't remember seeing anywhere in the actual game, another huge waste.

The game package also contains several "bonus" files over the usual Wolfenstein ones. Inexplicably, the ENDART and HELPART files from Joshua Waight's Wolfendoom 2 are there, which is strange because I can't find any connection between the two mods otherwise. Three files called DEMO.WL6, DEMO0.WL6 and DEMO2.WL6, the purpose of which I can't tell. Finally, there are also four saved games, dated three years from before the game's release. These, as well as the hidden levels, can be seen in the bonus video of my playthrough.

Let's also have a look at two lines from the Readme file:
"*Inspect all rooms for possible survivors"
"The nest also seems to be the only environment in which Whiptails can be born."

Since there's very little new coding for an otherwise rather ambitious mod, one might as well speculate that these lines indicate some planned but unimplemented features. Perhaps the authors wanted the player to gain points by finding wounded people in the base, but eventually scrapped the idea and as a result, the game has no treasure items whatsoever. The nest line also suggests the possibility of an enemy spawner object (which, in retrospect, would only make the mod's balance problem even worse, and perhaps even crash the game due to object overload, so maybe it's a good thing they never implemented that).

Last but not least, you can get the mod by clicking on THIS LINK!

Disclaimer: all reviews are only my opinion when playing the mod and are not intended to discredit anyone or the hard work they have put into creating their mod.
Posted by serpens at 4:47 am