Probably the most famous of all levels in Wolfenstein 3d is E1L1. It's the first level that anyone who has ever played the game saw and played through. Given a pen and paper I'm sure that most Wolfers would be able to draw it almost exactly as it looks in an editor still to this day! 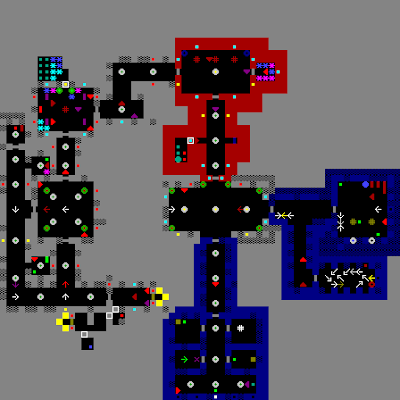 The level was basic in design but it introduced us immediately to the World of Wolfenstein 3d and showed us so much about Wolf, and why we still love it today. From it's blue prison walls to it's wood paneled wall areas and then to it's common grey brick walls that we are all so familiar with. We get dogs and guards, secret areas, treasure and and even a secret elevator.

By now most of us have played it so many times we feel we could play through the level with our eyes closed, finding all secrets and killing all enemies, so in honor of this iconic start to our favorite game I thought it might be interesting to take a closer look at it and how it has influenced Wolf 3d mod making.
A lot of mod makers have used E1L1 as a base for a level of their own mods. In this feature we will explore how and when it has been used, how the mapper made changes to enhance it for their own liking and what else it has been used in.

You can watch Balames87's YouTube video of the level HERE

Alpha Version
With thanks to Chris Chokan and some others, a couple of Alpha versions of Wolf 3d exists showing what Wolf looked like at an earlier stage through it's development.
We can see from the map view below that E1L1 doesn't look a lot different, but on closer examination we can see that some very important changes have been made. 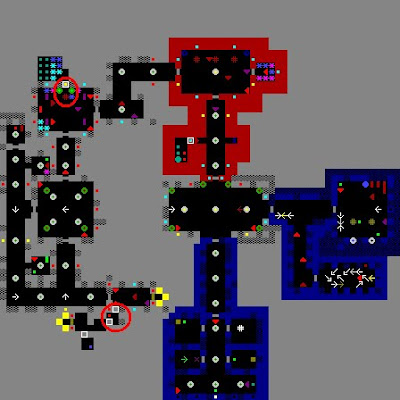 There have been quite a few guard placement changes made from the Alpha version to the final version, especially with a lot of Level 4 guards being added, but the 2 main things that were changed have been circled in the above map.
- Firstly, we see that a table was placed that would block the players access to the large ammo and treasure cache in the secret room near the top-left corner of the map. This tops the player up and lets the new player know exactly what their ammo limit will be throughout the rest of the game. Plus we start to hear some of the 'found item' sound effects that seemed so 'awesome' back in the day, for those of us that didn't just have a PC speaker!
- Secondly, the access to the secret elevator has been modified. With this version the first pushwall would have blocked the players access to be able to push subsequent pushwalls meaning one would not have been able to access the Level 10 secret level.
These seemingly minor changes would of had massive repercussions on the level and the way it was played and we can be very thankful these changes were made for the better.

3D Map View
Not sure who made this but it's E1L1 shown in a proper 3d view. Not a new version but a different way to see the map. 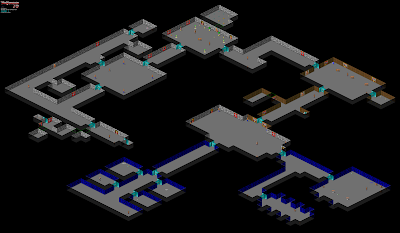 DOOM II
Most people are aware of the Wolf 3d appearance in one of id's other mods, Doom II. On the secret level 31, you are greeted with a rather familiar sight.

This was a nice way for id to honor Doom's predecessor and the arguable instigator of the first person shooter that Doom helped take to another level. id even went as far as to use Wolf's E1L1 map to further keep the tradition going. 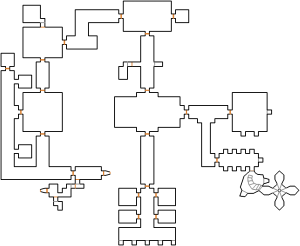 As you can see, very little was changed in the level design used as it matches quite closely to the Wolf 3d version. It was even complete with a secret elevator that took the player to another secret level which was Wolf 3d based also (A reproduction of the E1L9 Boss level).

You can watch Throom's YouTube video of the level HERE

End of Destiny
Probably the most famous version of E1L1 appeared in AReyeP and MCS' classic mod 'End of Destiny'. This appeared as a secret level and was perfectly summed up by AReyeP as to why others have used this level in their mods, "Who can forget this level? For many of us, it was our first Wolfenstein 3d experience!"

The main changes have been the addition of several secret areas with AReyeP describing the maps changes as containing "A number of sinister modifications". Anyone that has played the level can sure attest to the toughness (and rewards) of the level.

Sewer Town
John Burnett added a version of E1L1 to his fantastic mod 'Sewer Town' but with a couple of major changes. Firstly the player plays from the exit elevator backwards and secondly, parts of the level take place outside in a snow themed area!
There have been some other additional areas added that add to the playability and give this version of the map it's own identity 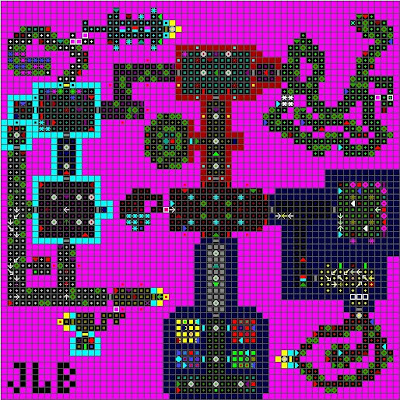 You can download Sewer Town from HERE.
You can watch LingYan203's YouTube video of the level HERE

The Grail of Eternal Life
The only real change to this version of E1L1 is the addition of a starting elevator the to the left of the original starting room. This appears as Level 7 in the mod so the addition of an elevator to match the other levels in the mod was necessary. Otherwise nothing else seems to have been changed form the original version except the removal of the Secret elevator. 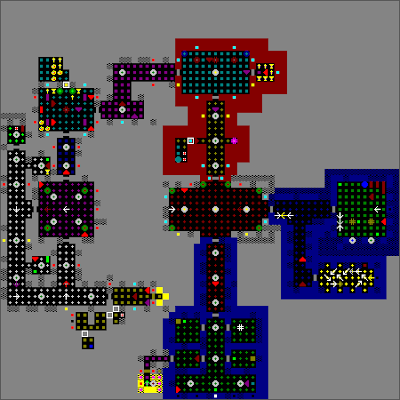 Project Vertilgung
Similar to TGOEL, the creators of Project Vetilgung have added a separate elevator area to their map, but like Sewer Town, the player starts in the original exit elevator and works their way backward to the new finish elevator located off the original start room. This also has an additional secret area added to the treasure and ammo room in the top left of the map but the main difference to the level is the removal of all guards except for 1 ghost located in the small treasure room in the wood paneled area that can be easily avoided. 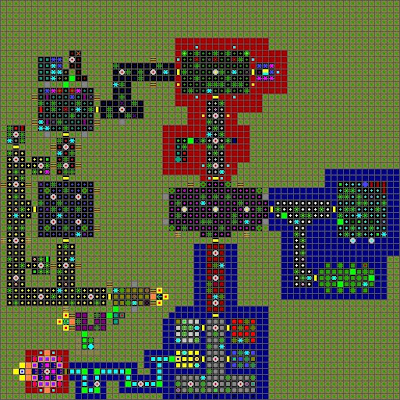 Project Wolfgeist
Thomas has used E1L1 in 2 of his releases with the first being in Project Wolfgeist which he made under his old 'Possum Trot' nickname.
Thomas has creatively played with the level and the way the player accesses certain areas and has changed the start position and secret exit by adding a couple of new elevators and removing the location of some of the secret walls turning their spaces into standard rooms. This gives the level a look and feel of it's own but still has a nod to the original version. 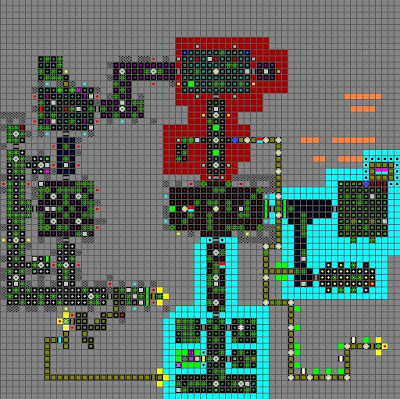 Castle Assault
For his second go at reworking E1L1, Thomas has again been very creative in the way he does things, again removing the obvious secret walls that everyone knows and adding some new secret areas that the player wouldn't immediately know were there.
The level no longer leads to a secret level and neither of the original levels elevators are used to exit the level. The player works backwards in this, like others have done, but the player starts where the hidden secret elevator is located in the original version. The majority of guards and sprites have been changed and an additional exit area has been added to the square blue prison walled area on the right of the map
Outside of AReyeP's version this is definitely my favorite reworking of those listed here. castle Assault is one of my favorite Thomas' mods and this only adds to it's playability and enjoyment. 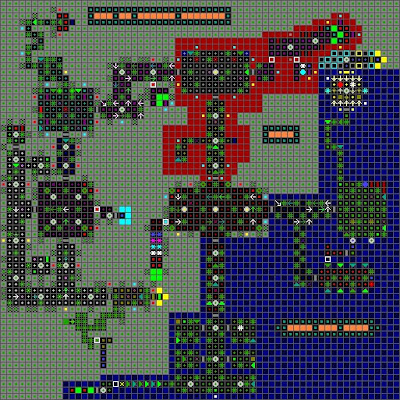 Wolf 3d Endgame
This is the only modified version of E1L1 that I haven't actually played but by looking at the map below it's fairly obvious to see the main changes made. The map is left almost identical to the original version, except for a large health & ammo stash behind the players start position and the addition of 48 mutants to the passageway leading to the exit area! I'm sure this would make for a very messy challenge. 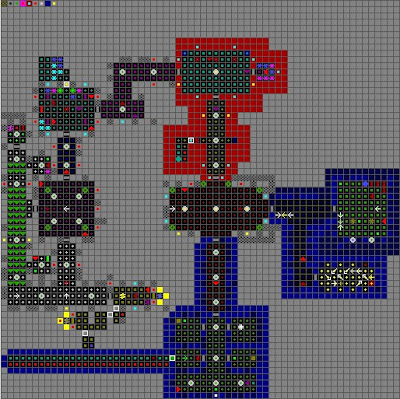 Enigma's Nightmare Part 1
Enigma released three parts to his 'Nightmare' series and used modified version of E1L1 in 2 of them (Parts 1 & 3). The modified level in Part 1 is an interesting challenge with many additional areas. Having played this level recently I feel that some of the new areas work well while some just seem unnecessary and the level would probably have worked better without them. Nonetheless it's still an interesting reworking of the original version. 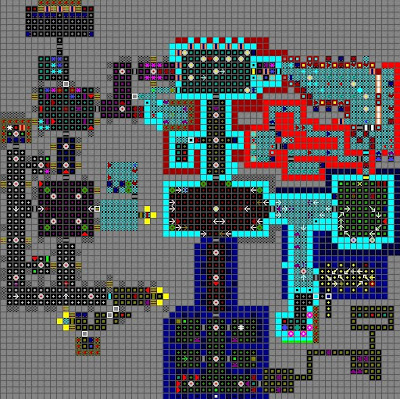 Enigma's Nightmare Part 3
Enigma's second effort at reworking E1L1 is unfortunately even a bigger mess, in my opinion, that the version he made for Part 1. There are huge big open spaces with little decoration or guards, long empty passageways and big parts of the map use the same floor codes. This makes for fairly easy going as you can just stand in one place and all the guards will come to you. If you do play through normally, you'll find that guards often open locked doors meaning it is possible to complete the level without finding a single key!
The access to the secret elevator has been changed, although it is still located in the same place on the map, but it's far more convoluted to access now. 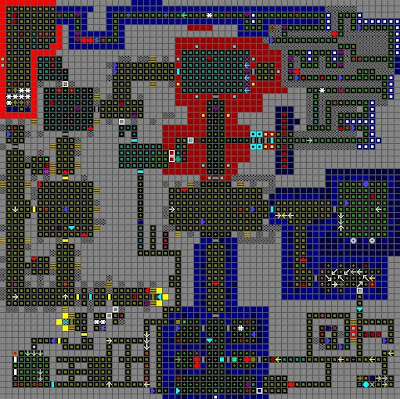 Thanks for reading and I hope you enjoyed reading this feature. If anyone knows any more mods where E1L1 has been used and wants to send me a message on which mod it appears in, then I'll consider doing a Part 2 if I get a few.
Also I wish to say a big 'Thanks' to Thomas Weiling, Chris Chokan and Brian Lowe for their assistance on this feature. Thanks for reading everyone.
Posted by Dean at 3:10 pm