Level Analysis: All This And Wolf3D Level 69 - Introduction/Prelude and Part 1

Note: This post will have multiple parts, and unfortunately a map view of the level being discussed cannot be provided. However, plenty of other screenshots from the level(s) will be included. This series of posts will also contain spoilers, even more than most level analysis posts, but it is needed to even close to fully recognize what makes this level what it truely is.

Thomas Weiling's mod "All This And Wolf3d" holds one record for sure even to this date - it's the only Wolfenstein mod out there with more than 60 consecutive levels to play through, and probably will remain that way until Thomas himself releases his next project "The Last Howl". But that wouldn't mean anything if the levels were a simple or poor affair - nobody would ever in their right mind appreciate 70 boring, poorly designed, or otherwise uninspired maps. Fortunately, All This And Wolf3D delivered the quality in spades, and nearly every last level it has is filled with quality map design and enough variety to keep a player's interest for this unusually long duration of time. However, the game's first 67 levels are, with the exception of the occasional new walls and static objects, are levels that could come out of the original Wolfenstein games or any other great mod.

That changes - just a bit - in Level 68. When you see the level loading, you will see a progress bar that shows how close the loading is to finished, unlike the usual screen that loads a level in a matter of seconds or two. You will then soon find out why - while only a medium sized floor, and arguably smaller than most levels in the game, it is clearly in a land far different from any you've explored in the 67 levels that preceed it. The typical Wolfenstein grey floor and fitting sky has been replaced by shading, and through the maps dark brown rooms and tunnels you will not be killing any Nazis, but rather you are in a land of ghosts, where fortunately once they're dead, they are finished (unlike Angel of Death, etc.). 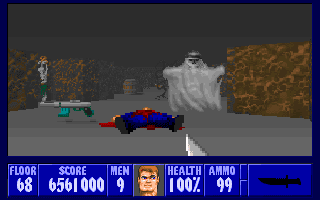 And while you play the level, you might wonder why the game switches gears into such a strangely different mode so abruptly. But after you throw one more elevator switch, and listen to a changed intermission sound, it does not take long to realize even more strange things as you enter Level 69. 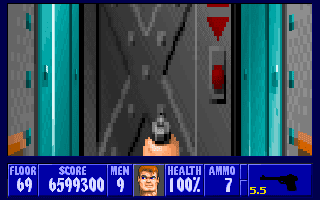 The picture above shows the very start of Level 69. The shading is gone, but two oddities become immediately noticeable. Firstly, I did NOT edit the resolution of the image. If the screen of the starting elevator looks like the dimensions have been unusually windened, that's because they have been. Secondly, look in the bottom right-hand corner of the screen. Notice the number 5.5 in yellow? That's actually a time - it counts down by tenth of a second, and when it runs out something unusual happens - but I won't get to it yet.

If you play around with your keyboard a little bit, it won't take long to notice another strange thing. The pause key does not pause anything. The quicksave and quickload keys (F8 and F9) do nothing, nor does the F1 key to restore another level. And if you press any F_ key, or hit escape to go to the menu, you'll find an unpleasant surprise when you attempt to reenter the game: 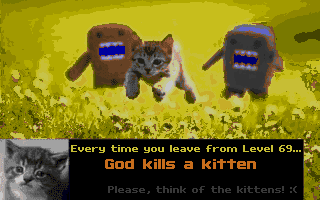 And then you will die. Yes, you are the kittens!

Okay, no, you're BJ, but the bottom line is you can't do any action to save your progress or stop the level here. At all. If you do, it WILL fail, and in most cases, you will find out only when you see the above screen and subsequently must die and restart. Don't try saving in the middle and then loading it fresh later (i.e. after ending the game normally) - it will only load from the very start of the level.

After you leave the starting elevator, the strange screen dimensions quickly reset to normal. And for a moment, it looks like a normal level. You are in a small corridor, of green slime walls, with a guard and a mutant. The only oddity on the screen is the ticking timer.... 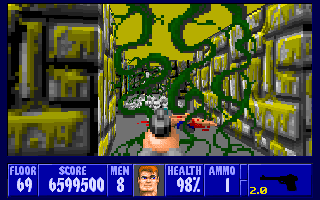 So, two seconds later...SURPRISE! You will be taken to a completely different scene on the screen, facing a locked door, with another weird screen effect - the size/scale of the screen is consistently, several times in a single second, switching between normal and oversized. Behind you will be a guard, and an officer on higher skill levels. It's a three-unit tiny hallway in total with all the doors being locked, so clearly without another time you're stuck. Indeed, another timer, this one in a different color, will be on the bottom right, and the ceiling will now be blue!: 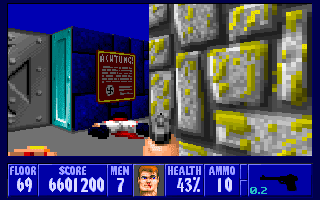 (Note that this screenshot is unable to demonstrate the oscilating screen size that I noted.)

It might be at this point that you start wondering, is this even by Thomas? Well, if you're a text file reader, you'll know from within the first few paragraphs of the manual that comes with the game that this level is in fact not by Thomas - the only and only level of ATAW to have that distinction. It is instead by Chris Chokan. And any early day Wolfer will know that guy for he made one of the funniest classic conversion of the old era - Chokage. And with that knowledge may come the fact, quickly or not, that a weird level was all but a foregone conclusion before the map even loaded. And everything that's happened so far might make some more sense. But don't be eluded - if this level was an iceburg, then you've barely seen its tip.

So, the time runs out. And suddenly, you appear once again in an entirely different area, this time using a red wall from the Lost Episodes with a fitting red ceiling to accompany it. The oscillating screen is gone, but yet another timer, this one just a little longer, is counting down the seconds. And if you battle this area fast enough, which shouldn't be a problem, you will find a picture of BJ's face with some of the letters of "I Am Death Incarnate!" appearing around it: 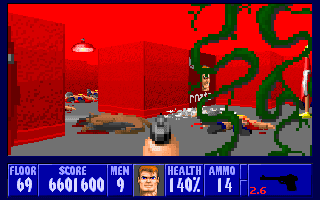 It's quite possible to have some time remaining after all the enemies have fallen to the floor, and a curious mind may just wonder if this wall does anything. So you may press it. And the wall doesn't move, but suddently the screen flashes. If you look closely, you'll find out your health has been raised 5% - even if it goes above 100% - up to a maximum of 200% - the shot demonstrates the ability to lift health over 100% using this wall. And you'll want the whole 200%, so trust me and get there in time to press on it in rapid succession before the clock runs to zero.

As the timer hits zero once more, you are warped into yet another area - a grey ceiling is here - but the timer is gone. If you're on a higher skill, you will be getting fired upon immediately. That starts to show why you wanted to have 200% health in the area before. Upon looking through the area, you'll find a little health, ammo, and treasure, as well as a few hidden enemies - and you may also see an elevator on the side opposite the enemies and items - except with a little problem - while you could navigate a maze of barrels, a single white pillar blocks your way through the barrels: 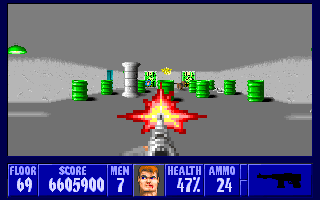 So you'll have to turn around the other way, and you'll find blue stone and two locked doors - can't proceed here. However, if you look off to the side in this direction, where two small "huts", with wood panel surroundings, are present, then you'll have the next move to progress.

It seemingly doesn't matter which one you go into - they are both identical. A room full of treasure with grey stone on the inner walls. They might look like dead ends, but there's one odd standout - the grey decoration walls are missing their decorations, and are filled with an arch of pitch dark instead: 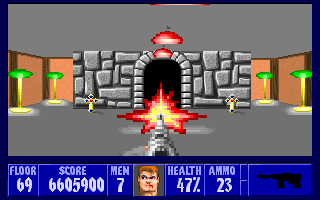 So - it's pretty obvious you must walk right into one of these black portals. But what happens next? Or better yet, what better way to end a post than leave a big cliffhangar that should have fans who don't know the answer waiting anxiously for Part 2?...so that's all for now!