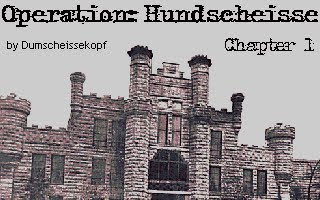 Initial impressions: There's some weirdness in this but it all appears to be for the sake of fun. The 'dog soldiers' have been well done as have the other sprites that have been modified. The sounds have all been redone and fit well with the mod and the fun aspect of it. The early levels are very basic and not much more than connected room after connected room.

Gameplay: The Gameplay is fairly similar to the original Wolf 3d game except Bosses are much, much harder. The levels aren't very complex but the changed graphics are well done and a delight to enjoy while playing through the mod, as are the new sounds that accompany them.
The mod does come off a bit as a bit of a hodge podge of random ideas at times, and certainly doesn't have as much story and ideas behind it's creation compared to other MonkeeWorks mods, from what I can see.

Mapping: The mapping is rather average throughout, and some levels you feel like have been completely constructed via a Modular home building kit as each room is just a replica pod of all previous rooms with only the internal walls changed around a little bit.
There are few secrets in each level and they become more important to find the further you get into the mod. The secret level is nicely done and serves it purpose well.

Likes: The Graphic work looks fantastic, has been done extremely well and is the stand out feature of the mod. The Bosses especially, have been brilliantly designed and work very well in the mod.
The whole idea behind the mod is fun and has been kept in that spirit by the creators.

Dislikes: The final (final) level is almost impossible to beat (at least I wasn't able to finish it after numerous tries) meaning the player is most likely never to get a full resolution of the mod, although I'm sure this was intended.
The Bosses, especially the 'Dog Mecha Hitler' is extremely difficult to kill and inexperienced players would struggle very badly trying to beat this boss.

Wrap-up: A fun little mod that you can play through in around an hour or so with some fun and creative elements to it. This has been made in a whole different spirit that most of the other Monkeeworks mod and should be treated as thus.
I can see now where a lot of influences have been taken from by other modders since this was released, that surely is credit due in it's self.
All in all, this is a bit of fun but not really a mod that you'd repeat play often.

Where Can I get it?: You can download the mod HERE or by clicking on the screenshot at the top of this post.
I even managed to find the 1 level demo, of which can be downloaded HERE.

This is the final week of a 4 week special I'm doing by reviewing some of Majik Monkee's Monkeeworks projects. The previous weeks reviews of 'Operation: Mutant Strike', 'Operation: Mutant Strike 2' and 'medEvil' can be read HERE (medEvil), HERE (O:MS) and HERE (O:MS2)
I have also previously reviewed Monkeeworks mod 'Halls of Stonehenge', the review of which can be read HERE.

Disclaimer: All reviews are only my opinion when playing the mod and are not intended to discredit anyone or the hard work they have put into creating their mod.
Posted by Dean at 9:30 am