Review: Mac-enstein 3d - Triumph Of The Will 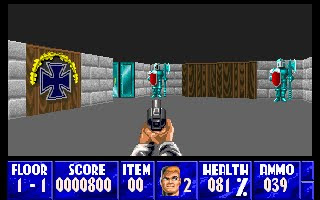 Initial impressions: The opening level is fairly basic but sets up the rest of the mod nicely. There is some unusual combinations of walls (as seen above), and having not played the Mac version much, I'm not sure if this is doing a brilliant job of immitating it or is just a part of ponz's personal mapping style.
The mapping is decent, there is a well measured amount of health and ammo and we meet all 3 guard types. There are some secrets, which as usual reward the player willing to take the time to look, and a nice amount of treasure.

Gameplay: The gameplay is consistently challenging and the guard placement isn't always predictable, meaning you might actually be surprised on occasion by their placement. The levels vary in size but are not large enough to get the player lost in and follow a fairly simple linear pattern, which certainly makes things easy for the player.
There are 3 Bosses spread throughout the game which make for a good challenge but if you are able to get some distance on them and pepper them with rockets then the battles can end fairly quickly.

Mapping: The mapping is done to a decent, challenging level. I'm not sure I've ever played any levels made by ponz before but you can see that real effort has been made to make fun but challenging levels for this set. The levels are nicely designed with a good range of sprites used but on occasion ponz has tended to over decorate (see the below 2 screenshots) a little but there is a consistency of design through out and a nice mix of level types and designs.
There is quite a different amount of secret areas throughout the levels, most of which are worth looking for, especially if you want the rocket launcher and flame thrower, which will help you immensly when fighting bosses, and many will provide shortcuts that will make things much easier for your progression through the game. 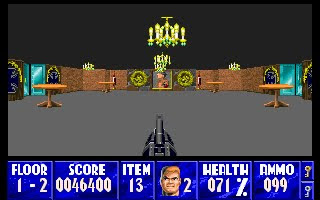 Likes: The levels have a decent flow and keep you challenged, with 12 being a good number that makes the mod a decent enough size that it takes a couple of sittings to play through everything.
The Mac sprites and walls are of a higher quality than the original Dos set but it's always weird seeing the guards only have the 'face on' images and not the full 360 degree view like in the Dos version. The Bosses have been done well and the sounds and music are of a high quality.
The speed of the secret walls is one thing I always thought was done much better in the Mac version and this shows just how much better they work.
The Rocket launcher and Flame thrower are awesome fun, although they take a little bit to get the aiming correctly, and make a welcome addition. I can see why so many modders have added them into their mods over the years!

Dislikes: Theres nothing really about the set itself to dislike as it is done quite well, but for me it's the same old things that made me prefer the Windows version over the Mac version originally. The main irritant is that most of the time you don't know when you've been shot. There is numerous times through this I thought I was on nearly full help only to notice that I was actually severely damaged and quite near death. An added sound when hit would have improved this, so the player at least has an idea that they've been shot.
The floor/level indicator is not accurate but instead in showing in the Mac style, it resets after each Boss challenge instead of being in one continuous count. The below screenshot showing Floor 2-1, is actually from Level 6!
The only other minor things are that the 1up's don't give you ammo and the item counter. The 1up is not a big thing as you are rarely near running out of ammo, but it's just something you get used to. The item count is a good idea but this is not reflective of your actual tally as it resets every time you surpass 99 items. 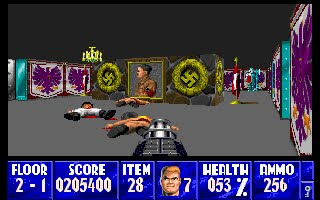 Wrap-up: This is a professionally produced set that looks, plays and sounds great. A lot of effort has been put into reproducing the Mac gameplay, look and style into Dos and while some of it isn't as good, some of it does show to be better.
With challenging mapping and good enemy placement this is a mod that will keep most players on their toes. Hopefully an SDL version appears at some time in the future.

Disclaimer: All reviews are only my opinion when playing the mod and are not intended to discredit anyone or the hard work they have put into creating their mod.
Posted by Dean at 10:38 am