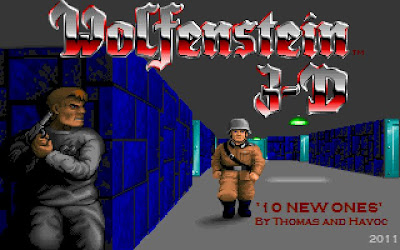 Initial impressions: The mapping in the first half of the mod I found to be rather formulaic and not some of Thomas' best work, however, once you get to about level 5 the pace picks up and so does the level quality. From here on you are into the mutant based levels, and these are normally where Thomas' mapping strengths lay. Not to say the earlier maps aren't of decent quality, I just feel they are little off from his best work of mods like 'All this and Wolf 3d', 'Castle Assault' and 'NovoWolf'.

Gameplay: The gameplay is fast moving and the guards are well placed. In thomas' mods it's usually rare to last long periods of time on full health and with full ammo. The ammo count is more measured than in most mods with little excessive amounts lying around. This is a good thing as it makes the player more aware of aimlessly blasting away and making the most of what is found.
10 levels is a good length for a mod, especially one with no storyline and you know is primarily just a map pack. The level quality evolves as you progress through towards the inevitable Boss challenge finale. 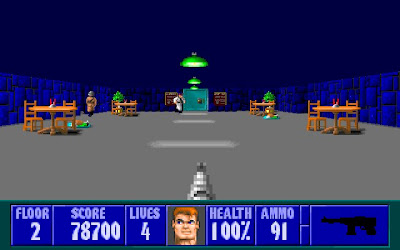 Mapping: The mapping quality gets better as the player progress's through the mod. The first 4 or so levels are rather average and to be honest, a little below where I would expect Thomas' mapping to be, however, after this things pick up substansiably as we are treated to some of Thomas' more finer mapping skills as the levels increase not only in challenge but also in complexity.
There's mothing overlty wrong with the early levels, I guess I just found them to be a little 'soft' and a tad formulaic for what I know Thomas is capable of. Each mapper has their own style and I feel this mod could have helped been a little more enjoyable (And receive a higher score) if the earlier weaker levels were a bit stronger and more to the level of the later levels which is more to Thomas' mapping skill level.

Likes: The Boss level was great, really challenging, with constant surprises and was a real battle to survive, the player must be constantly aware.
Levels 6 onwards were really good and show off how talented a mapper Thomas has been over the years, they are challenging, fun and well designed. Thomas likes to map with the original set, and all except for 1 wall addition, he shows off skillfully how well the original walls and sprites can still be used.

Dislikes: I like the scenario where a mapper purposefully sets it so a guard can open a locked door for the player, heck I've even used it myself, but it has to be done right. If you are too quick sometimes you can spoil the plan without any chance of recourse. Unfortunately this happens in the level 10 secret level meaning once you've spoilt the mappers plan you have no way accessing the locked area that the guard is supposed to open for you, leaving yo no chance of getting 100% of everything in the mod.
One thing that bugs me, and maybe doesn't bother others, is when the score 'clocks' over and starts back at 0 again. It's fairly simple in the mapping stage to fix this, especially in SDL, so there shouldn't be any excuse, or need, for it in modern mods IMO. 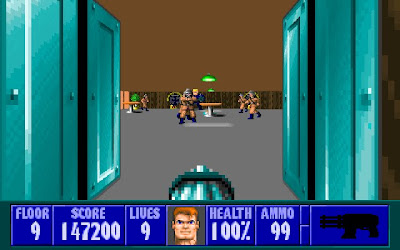 Wrap-up: Across the 10 levels, this evens out to be a decent mod from Thomas, and his first for a while. While not as good as some of his other mods there is still some challenge and some decent levels to warrant a full playthrough.

Disclaimer: All reviews are only my opinion when playing the mod and are not intended to discredit anyone or the hard work they have put into creating their mod.
Posted by Dean at 3:15 pm