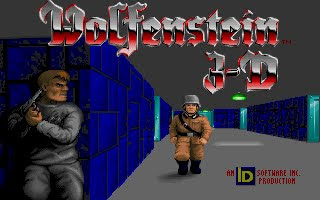 Initial impressions: Reading the story in the 'Read This' before starting the mod I really did not hold much hope for the mod;

"Many many months after Hitlers death. Allied forces said that they say a man with an uncanny resemblence of Hitler.This man who was said to be hitler was actully him. It seems before snabbs died he cloned himself and Hitler. Using pods that made clones of anything.You were send in to stop this. Now its all up to you!"

I really hope that the writer of this is either very young or has English as like a 5th language or something, sometimes it's better not to include a new story at all I think...
Looking at the menu I'm a little confused as this is only a 10 level mod, but it's been made using the full version of Wolf. The confusing part is that each of the 6 Episodes has been renamed. Starting each level it's fairly clear that the new maps are only on Episode 1, in a way, in the other 5 episodes, this is almost like passing off id's work as your own! I'd be careful about that sort of thing...
There are a couple of sprite replacements that aren't too badly done, however they are a little confusing the first time you find them. The green box in the shot below is actually the 1up! 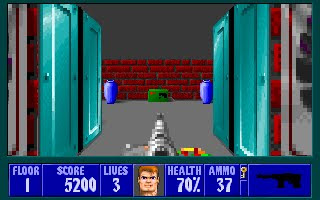 The first level is small and fairly straight forward with no secrets however it's a decent enough challenge and there is actually some hints of the potential for decent mapping here, let's hope we see a bit more of it in the Episodes other levels!

Gameplay: Well, the creator has made some efforts to make this a little challenging but unfortunately his lack of using more than 1 floor code means that all the guards in the game just rush at you as soon as you fire a shot, thereby removing any clever guards placements.
What has been done well is the Hitler Ghost replacement to a 'super' SS like enemy. However, they are just a graphic replacement so so they still have the usual failings of the Hitler Ghost also.
The Boss level is particularly poor, especially the placement of the replaced Hitler Ghosts being on the other side of the end game trigger, meaning another category where you can't kill everything in the game. Seeing as the end game trigger is placed right on the othe side of a door, this means that it all ends before you even realise. Which is actually quite a sweet relief in some ways.

Mapping: Unfortunately all efforts at decent mapping ends within seconds of having the irrational thought mentioned above, and becomes especially evident once you get to the apallingly mapped Level 3 which is just made up of a whole series of interconnected 3x3 square rooms, all with the same floor code, which make it awfully simple to just open the elevator door, fire 1 shot and do this; 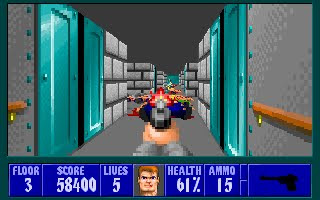 Basically just wait for everyone to come to you. Things are obviously fairly simple after this, as you can just waltz your way through the level, carefree, and at your own pace without any danger.
Worst of all, and I can't believe this has never been found in all the years that this mod has been released (I guess no one ever got to level 4!), the worst cardinal mapping sin of all time has been commited here; 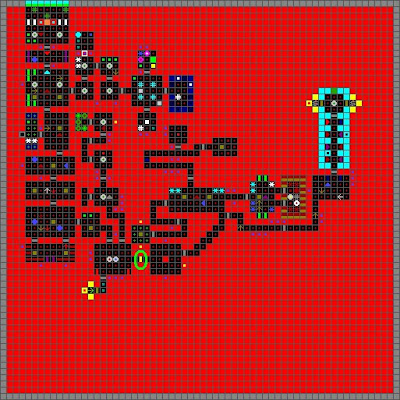 Where is the Gold key? You can see the gold door circled in Green (Looking closely you can also see the brilliant mapping techniques used here along with the use of a single floor code!). What good is it in releasing a mod that no one can complete because you were too lazy to fully test your mod to see if all the keys were there before releasing it!! The most unsettling part is that this is just about the best level in the mod as well! Not that that stands for much.
Thankfully, and a little prophetically, the creator has included a 'cheats' file, but of course there's always the option of sacrificing your score by using the old MLI trick to be able to complete the level and continue on with the mod, like I did, and am now regretting, as I could of spent the time doing, well, pretty much anything else really...

Likes: The guy made and released a mod. Sure, it is poorly done, mistake ridden, non-challenging and unable to be completed but at least he saw something through and got it out there... for people like me to judge it :P

Dislikes: The lack of secrets. Not to say that there must be many on each level but I think it shouldn't be too hard to have at least a couple on every level. In this there is 8 total, over the 10 levels. It's almost like he just forgot or something while mapping to include them.
The Mapping is, well, disrespectful. I know that sounds harsh, and there's a lot more to making a mod than the playability that others get from it but at least have some respect to fully test your crappy mod before unleashing it on the unsuspecting masses! Poor use of floor codes is something I dislike but you can't expect everyone to have the highest level of mapping ability but forgetting to put a key in is unforgivable in my books. 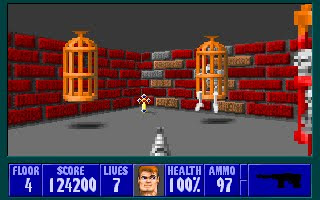 And there goes your chance at getting 100% of everything as well...

Ratings
Dean's Score: 1.0/10
Difficulty: Very easy compared to original Wolf.
Best Level: It would be unfair of me to put one over the others.
Worst Level: 3, 9 and a few others are just as bad as each other...

Wrap-up: As you can tell I was pretty darn disappointed with this mod, but it's easy for me to sit in my ivory tower and poke shit at other peoples work having years of experience working on and playing mods. I just wish the guy would have taken more care or asked others to test or give help with his work before release. But hey, at least he's released a mod, that's a lot more than some others can say!

Disclaimer: All reviews are only my opinion when playing the mod and are not intended to discredit anyone or the hard work they have put into creating their mod.
Posted by Dean at 10:05 am