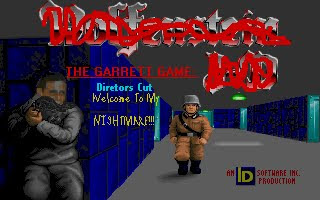 Initial impressions: This is one of those Wold 3d mods with just terrible hand drawn sprites made in Paint. Yes, we've all seen them before - they are generally the creating of the incredibly untalented (artisticly) or the lazy. There seems to have been little care put into the hand drawn graphics with most resembling very little at all, and the new walls (as seen below) amounting to not much more than a series of squiggles and coloured patterns, with some writing. The screenshot below is the opening room of the mod, but thankfully, for my vision and my sanity, traditional Wolf walls have been used mostly throughout.
All the enemies have been redrawn and my best guess for what they are meant to be are a thin, deformed midget and a snail?
The creator calls this 'The Directors Cut' but I'm not sure he's aware of what this actually means. In relation to a film, where this is most commonly used, it means that the Direcror is releasing a version of the film more closely to his vision than the studio initially allowed him to release, for whatever reason. It's a little hard to imagine anything like this happened here, who knows, maybe I'm just taking things too literally... 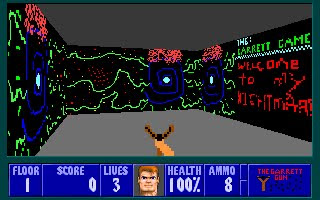 The story is an interesting one, although I'm rather confused by it's happenings and certainly feel very sorry for the player if this was indeed to happen;

"You are Garrett. Someone has been plaguing your dreams and now you must find him/her and give him/her the ass-kicking of a lifetime!"

So, I guess the aim of the mod is to track down Him/Her and ask them to let me get a good nights sleep? :P

Gameplay: The gameplay is ok, not the best but far from the worst I've played. It's not a difficult or really challenging mod, guard placement and mapping certainly don't make things any more difficult here either. The maps aren't big and run fairly linear although there's certainly no need to go into all areas as there are quite a lot of rooms, including secrets, in each level with little or nothing in them.

Mapping: I'm a player that like to find 100% of everything in a mod, If the creator has gone to the lengths to put something in there then I want to try and find it. In saying that, there's nothing worse than a mapper jepoardising their own maps by making areas inaccessible. Most of the time it's bad mapping where the mapper has forgot to include a door or secret passage, and for me that's just sloppy. Unfortunately we have a case of it here in this mod as well. Play testing is something every mapper/mod maker must do exhaustively before release, the last thing you want is to have someone find something like this; 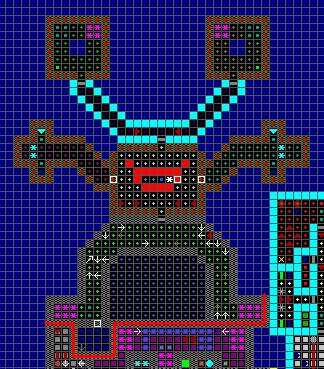 The red line shows the only connecting walls where you can access the funny looking secret man area shown above. As one can plainly see, there is no door, and there is no secret walls to access the area. Having this mistake means that the player can not only not explore the full map, and the mappers creativity, but also is unable to get 100% kills, ammo and secrets on this level, as it contains all 3, and no, there isn't a teleporter of anything like that to get in there. I just really struggle to understand how mod makers keep missing things like this...
Level 2 is just a smaller version of Level 1 with different walls, this I find to be rather lazy, unless you are going for one of those 'dejavu' type things, which in this case I can't find myself giving the mapper credit for trying to do.
Level 9 (Boss Level) is unchanged in design from the the original except for different wall types being used, just something to change it a little to personlize it would have been better then just using id's levels.

Overall the mapping is ok, there's some incredible laziness and sloppy mistakes but at least all the levels look fairly different and they aren't all made up of connecting same shaped rooms that are there for little or no purpose. 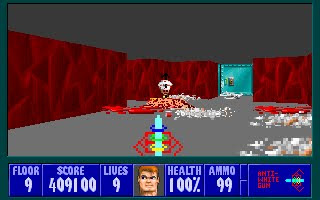 Likes: At least the creator has (attempted to) move away from the Nazi theme of so many Wolf 3d mods. However, to do this, you probably need to not use walls with Nazi flags or Swastika's on them, as this otherwise makes your antagonisers look like either Nazi sympathisers or are indeed Nazi's themselves. This of course, is not addressed in the incredibly expansive new storyline!

Dislikes: The sloppy mapping, there's instances of no floor codes, inaccessible ares and levels being reused. If you take the time to release your own mod, please, at least do your very best to make it as mistake free as possible!
The new artwork is very poor, anyone with a rudimentary ability as Paint could make better then what's been made and use here. I encourage people to make their own sprites, but when they are so badly done that it would have been better if you'd used the others then this subtracts from your mod, not adds to it. 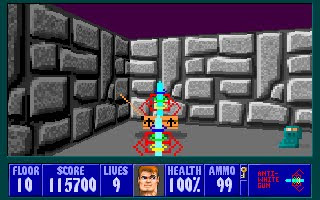 This is apparently the Chaingun replacement!
Ratings
Dean's Score: 5.0/10
Difficulty: Easier than original
Best Level: 6 - Not for any specific reason.
Worst Level: 2 - Because it's just a smaller version of Level 1!

Wrap-up: Not a great game really, with some complete lack of care used here with the sprite and some wall replacements. This is one I'd highly recommend to most players

Disclaimer: All reviews are only my opinion when playing the mod and are not intended to discredit anyone or the hard work they have put into creating their mod.
Posted by Dean at 6:10 pm