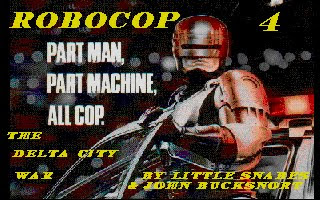 Initial impressions: This looks OK, but nothing like the Movie in anyway that I remember, I guess that's why this is Part 4! Although there was never another release, it does state this is only a Beta version. Not sure why it was released if it wasn't finished, and I guess we'll probably never know now.
The mod does have a nice look of it's own although there's some rather confusing things you notice straight off. Firstly the pistol has a sound like a machine gun and secondly, the odd mixture of guards. You get the guy in the screenshot below (Who just looks weird because of His height), the Officer from Wolf 3d, Giant Rats as well as one of the grunts from DooM. To be quite honest, they don't really all mix together very well. The new wall and sprite set, although very sparsely decorated fits quite well with the remaining Wolf ones that have been used and help give the mod a look of it's own.
All the level contain a (not obvious to find) hidden key. I know a lot of people are against this, and I personally don't think the player should have to be forced to search for secrets if they don't want to, but there are better ways to hide a key, such as showing a glimpse of the key behind something, than just having the player get to a locked door, be unable to proceed and then have to backtrack throughout the level searching for a secret to find the damn key. I'm not sure why the mapper chose to do this but at least by Level 3 you realise you are just going to have to search for the key containing a secret on each level. 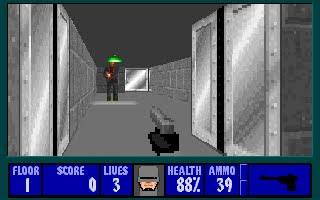 Gameplay: The gameplay is fairly straight forward with nothing to test the player too much. The maps are of average quality at best with a mish mash of seemingly randomly placed sprites and guards. This could of been a lot better decorated though with a lot of large empty rooms with little to no decoration. Guard placement is fomulaic and highly predictably, making this not much of a challenge at all.

Mapping: The mapping isn't outstanding if you compare it to a AReyeP or RonWolf but for 2001, when this came out, it's actually somewhat decent, except for the appalling maze on Level 6, I don't know how anyone could of thought that was a great idea!

"I know would could make this mod better, a maze that takes up half the level but does nothing!"
Please, not this, nobody likes these, especially if there's no secrets, no keys, no bosses, no health, ammo or treasure and really no point of why you have put this in your mod.
Outside of this the mapping is somewhat decent, the maps are rather small and nearly every level in the entire mod is the one same wall, but at least they aren't full of empty or superfluous rooms for the sake of it, like some other mods from this era have had. There is a respectable amount of secrets and health, ammo and treasure isn't always easily to find unlike some other levels I've seen in mods lately.

Likes: The game was easy to play, didn't take too long to complete and at least had some decent, although non matching, selection of enemies. There wasn't a lot of searching around required through empty rooms and passageways for the way to go, in fact it's all fairly straight forward, which can sometimes be a good thing, and sometimes make things a little dull.

Dislikes: The maze on Level 6 was terrible and completely unnecessary.
For any aspiring mappers, please learn how to use the silent guard feature, otherwise you mod won't be challenging to most players, everyone will just do the same thing at every door they come to - Open it, fire one shot, and wait for every guard in that room to come to them. You have to mix it up a bit!
No Boss - Even if this isn't complete and even if the levels aren't going to stay the same after the final release at least throw a Boss in as a bit of a challenge. The mod also just ends with a frozen wall when you get to Level 7, surely you could of added an end game trigger instead! (*Thanks to Andy_Nonymus for updating this and adding an exit elevator in the SDL release!*) 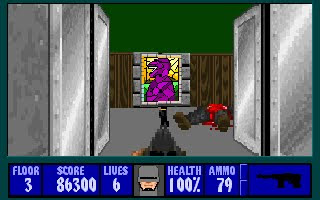 Why do this? I mean that's a stone wall in the middle of a wooden one! And Barney, WTF?

Wrap-up: This was OK but nothing special. The enemies all look good, in their own rights, but a set of guards that seemed to have more in common would have worked better. Also a larger use of differing wall types, more sprites and and non hidden keys, plus a Boss would have improved this mod a fair bit. The main problem is, none of those things are particularly hard to implement into your mod either, which is why this mod is rather disappointing. This also has nothing to do with any of the Robocop movies I've seen and I guess is really only a tribute in name.
I can't really recommend this as a must play, unless you have to play through all of the makers mods or something, otherwise their are a lot better mods from this era that I would suggest playing instead.

Where Can I get it?: You can download the mod HERE or by clicking on the screenshot at the top of this post. (Updated to SDL version 20/04/2013)

Disclaimer: All reviews are only my opinion when playing the mod and are not intended to discredit anyone or the hard work they have put into creating their mod.
Posted by Dean at 12:16 pm