Review: A Touch of Nazi 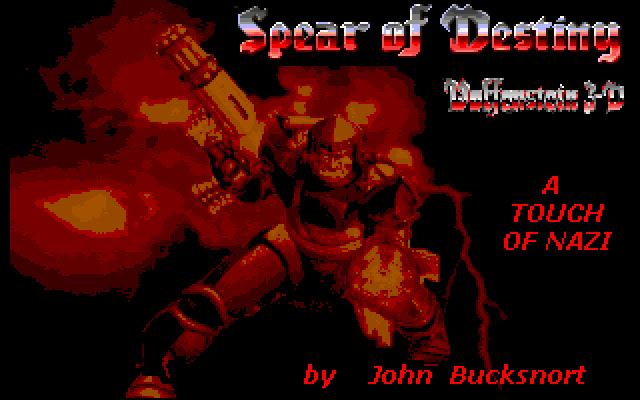 Initial impressions: I wasn't overly impressed to read that this mod has very little new work from John in getting up to this mod to review. There are 10 levels, which are made up of 2 from original Wolf 3d, 2 from Harry Mass Snr, 2 levels from Wolf 3d_60 by Barry Christian, A new level from Schabbs, and 1 new and 2 reused levels from John, plus a bonus challenge level made by John. I don't particularly like this type of mod, as I feel that you are playing off someone else's work, John does however credit each person accordingly. I just feel that when you are as a prolific mapper and mod creator as John was, then there's just no need for this type of thing, especially when your mod prior to this (Tragedy at Istanbul IV - Footsteps to Despair) was the best and most creative you've made and released so far. At least John has modified the level from Wolf 3d (E3L9) and added some more parts in to make it a bit more individual. 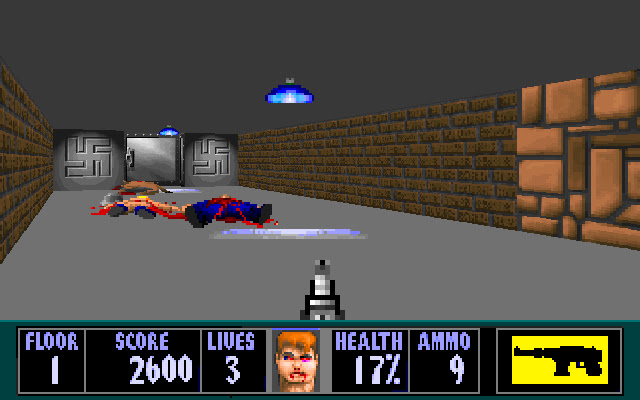 Gameplay: The Gameplay is fairly standard from a Bucksnort mod, although it does vary through the other author's levels. John is quite heavy handed here, especially on Level 1 where you meet several guards, officers and SS in the very first few rooms throwing you straight into action, unfortunately it's a fair struggle as there's also little health or ammo lying around to use and it's pretty easy to run out of both quite quickly.

Mapping: The mapping varies, but seeing there is maps from a number of other people included in this set that's no surprise. There is some good mapping (Levels 1, 6 & 9) but there is also some very bad (take the maze on Level 8 for example).
One thing though that I was disappointed about was that the hidden elevator to the secret level, which is accessed through a secret pushwall, is unfortunately not behind any locked doors meaning the player can simply head there, almost completely unchallenged, from the start elevator and flick the switch. From my experience, secret elevators are usually a fair bit harder to access than this, and in my honest opinion should be.
I also found that the trees didn't look right. I understand they were meant to represent that the player was outside but unfortunately none of the textures or sprites really helped relay that so it basically just made the rest look like they were growing in the middle of passageways. What made it worse was that there were often hanging skeleton sprites used nearby. These are designed to look like they are hanging from the ceiling but yet the tress are trying to give the player the impression that they are outside? 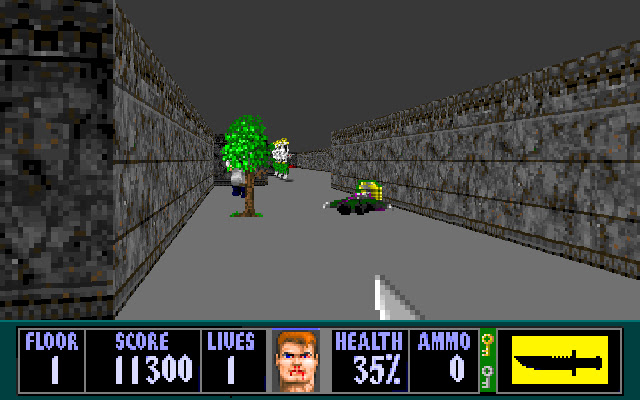 Likes: There is some good levels here and the ones John has added from others work do fit relatively well with John's levels, although it is somewhat clear when you aren't playing a Bucksnort level. John has made some nice revisions to level 3 which was an original Wolfenstein 3d Boss level as well as the other levels receiving a bit of a make over with the wall set John has chosen for this.
There has been some use of what appears to be some Lost Episodes walls. They are quite nicely done and, when used correctly, fit in rather well here.

Dislikes: I know that they are iconic of John but I don't really like the changed ammo clips sprite to the SoD ammo box, it's obvious that it's been reduced in size but to me it just looks ridiculously big still. I'm also not a fan, as I have pointed out before, of the mish-mash of walls and the way they are used. There are many occasions where wall textures change or are used where they clash quite badly with others. There are many mapping techniques one can use to have neighbouring rooms have different textures rather then to show through into the next room.
Level 8, oh my...
I was also rather disappointed at first that John released a mod like this but they while playing it I started to look at it a bit differently, more like when a music artist releases a Greatest Hits album half way through their careers and then goes on to release more standard albums after that. I think this would have worked better if it had only been John's work but amongst the others maps we do still get some new levels from John as well as a new level from Schabbs and 2 previously unreleased levels from Harry Mass Snr. 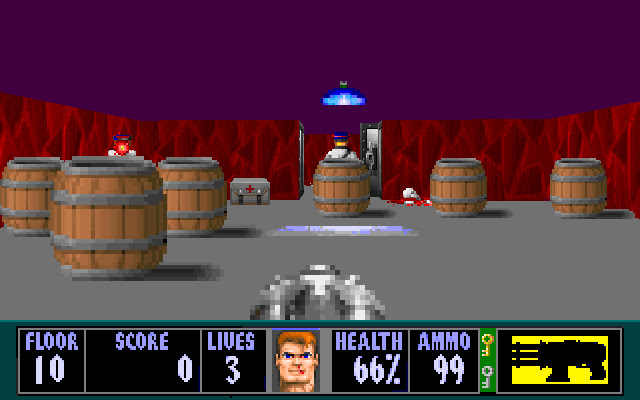 Ratings
Dean's Score: 6/10
Difficulty: Most levels are rather difficult, much more so than the original Wolf 3d.
Best Level: 6
Worst Level: 8 - Maze Hell!

Wrap-up: Not a mod that is synonymous with John and probably fairly too. I have no problems with other people contributing to your mod but when those levels have been previously released in their authors own mods I just think it's a bit of a cheat. There is however some decent work and some new levels to keep everyone interested.