Initial impressions: The sprites and walls are all of very similar colouring and the players eyes seem to have big troubles distinguishing them from each other, especially the smaller items like health, ammo and treasure items. Large levels with big open spaces mean the player must be very careful of approaching enemies at all times.

Gameplay: The gameplay is genuinely good and fairly fast placed because of the layouts of the large levels. outside of that, at times it is extremely difficult to see where you are going because of the graphics colours and it can be quite easy to miss things and nearly everything blends into each other. There is a good atmosphere and the music helps build the tension of the mod nicely.

Mapping: The mapping is easily the strongest point of this mod. Ack has done a fantastic job making each of the levels challenging and exciting to play. Each level connects well with others in the set and suits the game outline perfectly. Some levels can be quite mazey in parts though. There are liberal use of secrets that aid the player greatly in searching for them.

Likes: The game has a very original look to it as none of the walls, sprites or enemies had been used in Wolf before. The story is well done and all elements have been created to support it and the players challenge. The music and sound effects set the mood nicely.

Dislikes: The blending colours (as seen in the screenshot below). The mod at times looks like it only used about 5 colours for it's entire palette which makes it extremely difficult to determine some things from others. This also makes it quite difficult to play the mod for long periods of time as your eyes become quite tired trying to focus constantly.
Some levels have rather annoying large mazes, especially levels 12 & 18 which can take away from the players enjoyment when stuck in the same area constantly searching for a way out. The sound effect of the tigers shooting fireballs is the sound of a gun firing which just sounds completely wrong. 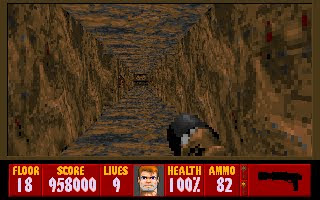 Ratings
Dean's Score: 7/10
Difficulty: The player needs to be careful at all times. The boss levels can be quite difficult, especially the last level.
Best Level: 15
Worst Level: 18

Wrap-up: Majik Monkee's first mod is very creative with good gameplay, fantastic maps and some great new graphics. The mod really suffers though from the overuse of similar colours for all walls, sprites and enemies. It can be extremely difficult to play sometimes as so much just blends in together. Maybe everyone won't have the same trouble that I did playing it but I can only review based on my playing experience.
This is still worth a play though, especially for Ack's high quality levels but also if you are a big fan of the Blood game that everything has been taken from.

Where Can I get it?: You can download the mod HERE or by clicking on the screenshot at the top of this post. Halls of Stonehenge has a sequel titled 'HoS: Special Edition'. It has new levels and different enemies, it can be downloaded HERE.

Disclaimer: All reviews are only my opinion when playing the mod and are not intended to discredit anyone or the hard work they have put into creating their mod.
Posted by Dean at 12:42 pm